Why the IMF Cried “Uncle!,” and How Big Companies Are Preparing for a Euro Crash

This week we witnessed an intellectual revolt by the International Monetary Fund (IMF), the key partner involved in this European crisis with the European Commission and European Central Bank (ECB), aka the Troika. And it validates my long-term, euro bearish view.

The IMF finally concluded that austerity measures are squeezing the life out of the euro-zone economy. Most of the economies imposing strict austerity are fading fast. They include: Greece, Portugal, Spain, and Italy.

Here is the policy path that the IMF had endorsed until its about face this week: A country with a massive welfare society can cut spending, while raising taxes and expect the economy to grow and produce more tax revenues.

The IMF has finally realized that the path of austerity and tax increases leads to a viscous downward spiral of lower growth, lower tax revenue, more cuts, lower growth, lower tax revenue … etc. It is what many have been saying for a long-time and why most have predicted a Great Depression era settling over the zone. (more)
at 12:06 AM No comments: Links to this post

The "Chart of the Day" is NRG Energy (NRG), which showed up on Wednesday's Barchart "52-Week High" list. NRG Energy on Thursday posted a new 13-month high of $23.78 and closed +2.74%. TrendSpotter in mid-Sep took a profit on a long trade held since late June, and then recently turned long again on Oct 3 at $22.18. In recent news on the stock, Goldman Sachs on Sep 10 upgraded its rating on NRG Energy to Buy from Neutral and set a target of $25, citing strong free cash flow and participation in the Texas power market. Barclays on July 23 upgraded NRG Energy to Overweight from Equal Weight. NRG Energy, with a market cap of $5 billion, owns and operates a diverse portfolio of power-generating facilities, primarily in the United States. Its operations include baseload, intermediate, peaking, and cogeneration facilities, thermal energy production and energy resource recovery facilities.

I would be a buyer with slightly more weakness in this sector. Below I’ve indicated potential areas of support on the stocks I like in this sector. I believe this pullback will be swift and extremely volatile, and it will be bought quickly so you’ll have to be quick on the buy button. There is just too much strength in the RSI for this rally to be over.

“To learn more about All About Trends and receive our free report — “How To Outperform 90% Of Wall Street With Just $500 A Week”, sign up for our free newsletter here.

DIRECTV provides digital television entertainment primarily in the United States and Latin America. The company engages in acquiring, promoting, selling, and distributing digital entertainment programming primarily via satellite to residential and commercial subscribers. It offers direct-to-home digital television services, as well as multi-channel video programming distribution services under the DIRECTV and SKY brands. The company provides various channels of digital-quality video entertainment and CD-quality audio programming directly to subscribers' homes or businesses, including approximately 170 national high-definition television channels and 4 3D channels; and video-on-demand service, which provides movie and television programs to broadband-connected subscribers. It also provides premium professional and collegiate sports programming, such as the NFL SUNDAY TICKET package that allows subscribers to view the NFL games. In addition, the company owns and operates three regional sports television networks based in Seattle, Washington; Denver, Colorado; and Pittsburgh, Pennsylvania under the ROOT SPORTS brand name.
To review DIRECTV's stock, please take a look at the 1-year chart of DTV (DIRECTV) below with my added notations: 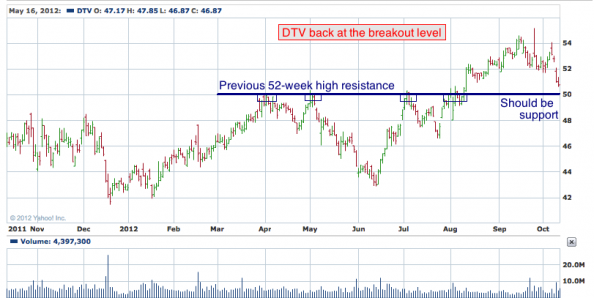 From March until early August, DTV created a key resistance level at $50 (navy). That resistance level was a 52-week high breakout when the stock shot higher in mid-August. That breakout was a sign that the stock should be moving higher, which the stock did do. Now that DTV is pulling back, the old $50 resistance should provide support for the stock.
at 12:05 AM No comments: Links to this post

China, Russia, and the End of the Petrodollar

Say you’re an up-and-coming superpower wannabe with dreams of dominating your neighbors and intimidating everyone else. Your ambition is understandable; rising nations always join the “great game”, both for their own enrichment and in defense against other big players.

But if you’re Russia or China, there’s something in your way: The old superpower, the US, has the world’s reserve currency, which allows it to run an untouchable military empire basically for free, simply by creating otherwise-worthless pieces of paper and/or their electronic equivalent. Russia and China can’t do that, and would see their currencies and by extension their economies collapse if they tried.

So before they can boot the US military out of Asia and Eastern Europe, they have to strip the dollar of its dominant role in world trade, especially of Middle Eastern oil. And that’s exactly what they’re trying to do. See this excerpt from an excellent longer piece by Economic Collapse Blog’s Michael Snyder: (more)
at 12:04 AM No comments: Links to this post

Chart Signaling 45% Upside in This Under $3 Stock: SIRI


When I bought a new vehicle last year, it arrived with a free six-month trial to Sirius XM Radio (NASDAQ: SIRI), the commercial-free satellite radio provider. I was skeptical, but took advantage of the trial -- after all, it wasn't costing me anything. But with dozens of free, local radio channels at my fingertips, I couldn't imagine why I'd pay for it.

Fast forward one year and I admit I'm hooked. Sirius has become a part of my driving routine. Most of the time, the channel is parked on classical music, although I occasionally switch to commercial-free talk shows. Now, I find it hard to imagine going back to commercial radio!


It seems I'm not the only one. Sirius has developed a loyal following. The world's largest radio broadcaster, by revenue, currently has 22.9 million subscribers. And this number is regularly increasing.

For the third time this year, the company raised its full-year guidance on net subscribers. Management now expects to add about 1.8 million new subscribers by year-end, up from previous estimates of 1.6 million.

Since many new cars come with a Sirius trial subscription, much of the company's growth is driven by robust North American auto sales. An August Scotiabank Economics report showed double-digit gains in North American car sales so far this year -- the highest level since 2007. Similar increases are expected in the second half of 2012, due to record low interest rates.

Sirius isn't just found in people's cars, however. Commercial-free radio programming has found its place in the home, the office, and in businesses, like restaurants and hair salons. In fact, Sirius is the second-largest subscription-based entertainment provider in the United States behind only Internet movie provider Netflix (NASDAQ: NFLX). And, according to many industry analysts, Sirius should be able to double its user base in the coming years.

The technicals paint a bullish picture for Sirius. Since December 2010, the stock has been in a major uptrend, rising about 390%. As I'll explain below, the shares show no sign of slowing down.