Could This Be the Next Billion-Dollar George Soros Currency Trade?

It is an oversimplification to summarize George Soros' investment philosophy based on the theory of reflexivity into a single sentence, but it is useful to think of the theory as telling us that a trend will continue until it reverses.

Reflexivity also points out the direction of the trend can be influenced by underlying economic factors and the perception of traders and policy makers about the trend. That makes analyzing trends more complicated because we need to consider what policy makers might do and how traders will react in addition to prices.

The entire global economy might be thought of as a group of trends under the theory of reflexivity. What happens in the U.S. impacts Japan, for example, just as policies in Japan have an impact on the U.S. These impacts can be seen in exchange rates, a market in which Soros has demonstrated mastery. His most famous trade -- a bet against the Bank of England -- made him $1 billion in one day.

Recently, Soros said that after a period of remarkable stability in currencies, he expects to see "more fireworks, more volatility." Traders benefit from volatility because volatile markets are the ones that offer large gains in short periods of time.  (more) 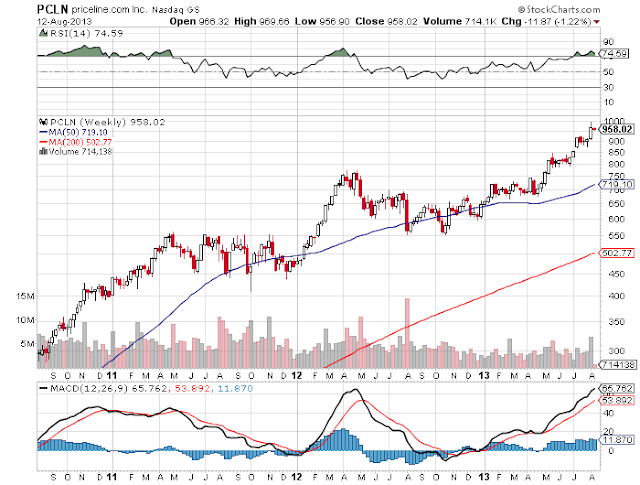 For a thousand bucks, a Web surfer today can book a round trip flight from New York to London in three weeks using Priceline.com – or, for the same $1,000, one could buy slightly more than a single share of Priceline.com (PCLN) stock.

How’s that for a rich bit of irony? Priceline.com, a company built on offering the lowest price for travel to distant places, is on the verge of becoming the first Standard & Poor’s 500 Index member (GSPC) to crack above a four-digit price.  (more)

For years…and I mean YEARS…I’ve been screaming from the top of my lungs that the physical gold and silver warehousing by the large banks was a complete scam. Well today it’s beginning to look like the CFTC is FINALLY going to look into the matter: CFTC subpoenas metals warehousing firm as inquiry heats up

“The source, who asked for anonymity and for the name of the firm not to be disclosed as he is not authorized to speak to the media, said the CFTC’s enforcement division has asked the firm that has received the subpoena to send, by August 23, every document, communication, voice recording, correspondence and external and internal emails related to the LME since January 2010.”

On July 24th Facebook's (FB) earnings report unleashed the animal spirits on Wall Street. With one set of numbers an entire industry was validated. Despite claims to the contrary, very few saw it coming. To analysts of a certain age it was frankly stunning that anyone would willingly click an advertisement on their smartphone. Mobile ads seemed intrusive, annoying and a counterproductive use of ad money.

Yet there it was: 41% of Facebook's advertising revenue in Q2 came from mobile. When Facebook shares ramped 28% the next day, it became a professional imperative for fund managers to own shares of anything with an app and sort of advertising connection.

In the last month Yelp (YELP), Trulia (TRLA), LinkedIn (LNKD) Zillow (Z) and GroupOn (GRPN) have gone up more than 30%. At this point if you're running money professionally you can't justify not being long anything remotely related to this space.

It's one thing to whine about whether or not the valuations make sense. The ticker isn't right or wrong. It just is. Individuals can sit these moves out but pros are in the business of booking profits regardless of what valuation models say.

"There were skeptics lined up out the door about Facebook and I've had my own reservations about the company," says Eric Jackson of Ironfire Capital. As a result traders just started grabbing anything with social or mobile attached to it.

The stocks are all going to be "nosebleeders" as Jackson says. That means the valuations are pretty much tossed out the door. Institutions need to own stocks in the space and there aren't enough of them to go around at the moment.


We've seen this move before of course. This is precisely what happened with anything.com in the late '90s. That doesn't mean short. It doesn't even mean investors need to run away screaming. It means only this: stocks aren't supposed to move 20% higher with this kind of regularity. These moves will end in tears. The market will be flooded with IPOs and demand for mobile ad shares will fade.
The conclusion is inevitable but the timing is unknowable.

Do with that information what you will.
Please share this article
at 12:04 AM No comments: Links to this post

Don't Get Burned by the Dreaded 'Triple Top'

There is a lot of discussion lately that we are reaching the peak of a dreaded "triple top."

Here are just a couple of the many warnings from market experts:
-- If the S&P 500 and other major U.S. indexes are turned back at today's critical, even historic, juncture, we could see a significant upcoming decline in the U.S. stock market as history repeats and also rhymes. - MarketWatch, "Is this the biggest triple top ever?"

-- A third top has now formed, and a 60% stock market drop is inevitable -- and it could strike at any moment. - MoneyNews, "Market Collapse Predicted By Scientist"

That's just a sampling of the reports that are being released almost every day.

In 2000 and 2007, the S&P 500 peaked near current levels. The market then plummeted into long and agonizing bear markets. These crashes eliminated trillions of dollars in wealth and eroded investor confidence. J.P. Morgan Asset Management recently published this chart highlighting the S&P 500's inflection points over the past 16 years.

As you can see, the market ballooned from 1997 to 2000 and from 2002 to 2007. But both increases were answered with sharp tumbles from both the tech bubble burst (-49%) and the financial crisis (-57%). And the latest climb is even steeper than the previous two with a rise of 132%. That holds the potential for an even sharper drop.
Please share this article
at 12:03 AM No comments: Links to this post