With Today's Plunge in Natural Gas, It's Time to Rebuy Chesapeake Energy 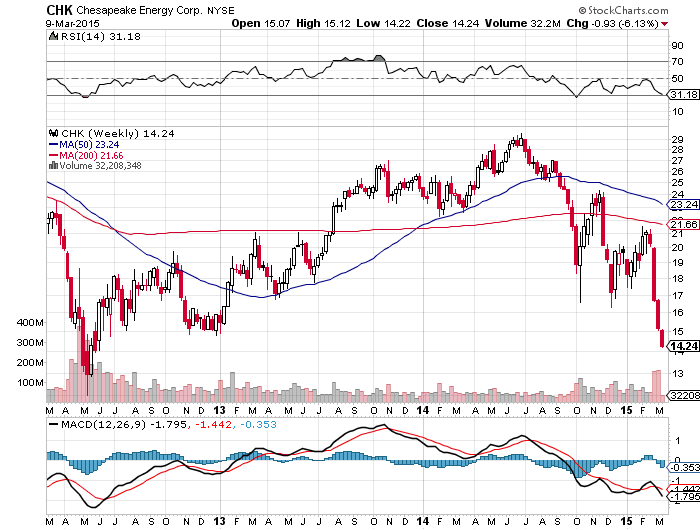 Given today’s plunge, coupled with the warmer weather forecast and start of the shoulder season of weaker demand, MoneyShow's Jim Jubak is rebuying shares of the second-largest natural gas producer in the US with an initial target price of $19.
Back on February 3, I sold Chesapeake Energy (CHK)—my favorite stock for playing volatility in the price of natural gas—out of my Jubak’s Picks Portfolio.  The rally that had taken the share price from the December low of $16.71 to $21.01 was a bounce, I said, rather than the beginning of a sustained recovery. (See my post on the sell here.)
The stock closed even lower than that December level today, March 9, at $14.24. That’s near a new 52-week low for the shares and is closing in on the five-year low at $13.59.
I think it’s time to rebuy—maybe for another trade after a bounce, maybe for a more sustained recovery—we’ll see. Tomorrow, I’ll re-add these shares to my Jubak’s Picks portfolio. (more)

Beat the Market With These 9 Sector ETFs 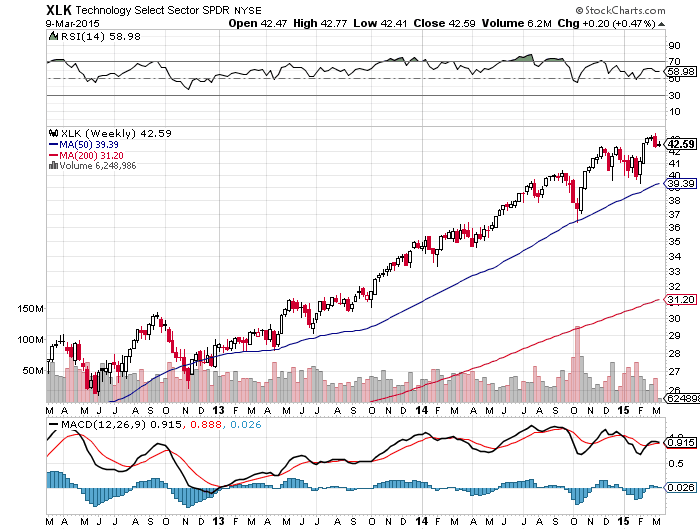 It’s pretty easy to understand the appeal of indexing, particularly after a year like 2014. Less than one out of five active mutual fund managers beat their respective benchmark last year. And those few that did beat their benchmarks did so by a pitiful margin of just 1.8% on average.
Even worse, many fund managers are really just closet indexers. There is too much career risk in going against the grain, so most large fund managers tend to buy the same stocks and sink or swim together. So … why pay steep fees to active managers for underperform when you can buy an index mutual fund or ETF with expense ratios of 0.1% or even lower in some cases? (more) 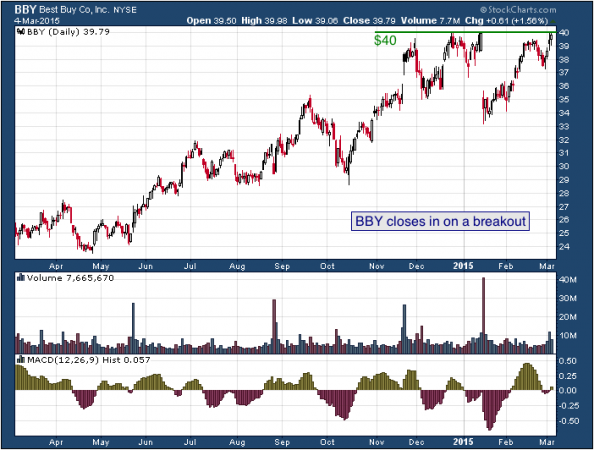 BBY had been on a steady trend higher from its April low up until its $40, December high. After that, the stock has hit that same $40 (green) mark a couple more times only to end up eventually pulling back down. If BBY can finally break through that $40 resistance the stock should be headed higher. A close above that resistance would also constitute a new 52-week high.

The Tale of the Tape: BBY has a 52-week resistance at $40. The possible long position on the stock would be on a breakout above that level with a stop placed under it.
Please share this article
at 12:03 AM No comments:

Renowned precious metals analyst David Morgan is out with a new book called “The Silver Manifesto.” In a chapter called “The Debt Bomb,” Morgan lays out the biggest problem and the biggest reason to own precious metals. Morgan contends, “Basically, the United States have exported our inflation to every other country. So, for them to stay competitive, they are required to weaken their own currencies for what is called competitive advantage. It simply means if they don’t print . . . their currencies would become too strong, and they would not be able to export. In order to keep trade flowing, these other countries are basically required to do what the U.S. government does, and that is export a great quantity of un-backed paper promises that are impossible to pay back. That’s the crux of “The Debt Bomb.” It’s going to explode. . . . The basic premises are: You default on the debt . . . or you keep kicking the can down the road, and you continue to debase the currency, which is what governments have always done when it’s a non-backed currency. If you look at the value of the Federal Reserve from 1913 to now, in a little over a hundred years, the Federal Reserve itself will admit that 100 cents is now worth about 4 cents. So, you have lost 96% of the value of the U.S. dollar. . . . That has been a failure, a tremendous failure. That is a collapse in slow motion. Now, what we are really arguing about is what’s going to happen to the last 4 cents of the U.S. dollar. . . . It looks to me that at some point, a tipping point, that you will get an acceleration . . . and things will change dramatically.”

On the Greek debt crisis, will it be forced to default? Morgan says, “Yes, and the problem is everyone in power is acting like a bunch of kids. No one wants to be an adult and state the problem clearly. This new regime in Greece actually has. They are the only truth tellers at the political level that actually said we are bankrupt.”

On the price of silver, Morgan says, “What is $16 silver compared to $5 silver over a decade ago, and basically they are the same price. Isn’t that amazing, this inflation that nobody talks about. It you take the $5 silver price back in 2003, and you use the true money supply of fiat currency today, hey guess what, it is pretty close to $16. So, in a nut shell, because you are buying the same silver for basically the same amount over a decade ago, it’s really on sale. It is really a bargain.”

When might the economy and the “debt bomb” explode? Morgan predicts this fall. Why? Morgan says, “Momentum is one indicator and the money supply. Also, when I made my forecast, there is a big seasonality, and part of it is strict analytical detail and part of it is being in this market for 40 years. I got a pretty good idea of what is going on out there and the feedback I get. . . . I’m in Europe, I’m in Asia, I’m in South America, I’m in Mexico, I’m in Canada; and so, I get a global feel, if you will, for what people are really thinking and really dealing with. It’s like a barometer reading, and I feel there are more and more tensions all the time and less and less solutions. It’s a fundamental take on how fed up people are on a global basis. Based on that, it seems to me as I said in the January issue of the Morgan Report, September is going to be the point where people have had it.”
Please share this article
at 12:03 AM No comments:

In a shocking interview with PBS, billionaire mutual fund icon Jack Bogle, revealed that Wall Street is unapologetically stealing from millions of hard-working Americans. Bogle showed how “70% of your market returns” go straight to the pockets of Wall Street, and only 30% actually goes to you, the investor.

And Bogle should know.

Bogle, who founded the Vanguard Group in 1974, has had a decades-long insider’s view of the entirely corrupt fee structure on Wall Street. (more)