via Investment Postcards from Capetown

Wall Street “gurus” come and go, but in the case of Bob Farrell legendary status was achieved. He spent several decades as chief stock market analyst at Merrill Lynch & Co. and had a front-row seat at the go-go markets of the late 1960s, mid-1980s and late 1990s, the brutal bear market of 1973-74, and October 1987 crash.
Farrell retired in 1992, but his famous “10 Market Rules to Remember” have lived on and are summarized below, courtesy of The Big Picture and MarketWatch (June 2008). The words of wisdom are timeless and are especially appropriate at the start of a new year as investors grapple with the difficult juncture at which stock markets find themselves at this stage.

1. Markets tend to return to the mean over time
When stocks go too far in one direction, they come back. Euphoria and pessimism can cloud people’s heads. It’s easy to get caught up in the heat of the moment and lose perspective.

3. There are no new eras – excesses are never permanent
Whatever the latest hot sector is, it eventually overheats, mean reverts, and then overshoots.
As the fever builds, a chorus of “this time it’s different” will be heard, even if those exact words are never used. And of course, it – human nature – is never different.

4. Exponential rapidly rising or falling markets usually go further than you think, but they do not correct by going sideways
Regardless of how hot a sector is, don’t expect a plateau to work off the excesses. Profits are locked in by selling, and that invariably leads to a significant correction eventually.

5. The public buys the most at the top and the least at the bottom
That’s why contrarian-minded investors can make good money if they follow the sentiment indicators and have good timing. Watch Investors Intelligence (measuring the mood of more than 100 investment newsletter writers) and the American Association of Individual Investors Survey.

6. Fear and greed are stronger than long-term resolve
Investors can be their own worst enemy, particularly when emotions take hold. Gains “make us exuberant; they enhance well-being and promote optimism”, says Santa Clara University finance professor Meir Statman. His studies of investor behavior show that “losses bring sadness, disgust, fear, regret. Fear increases the sense of risk and some react by shunning stocks.”

7. Markets are strongest when they are broad and weakest when they narrow to a handful of blue-chip names
This is why breadth and volume are so important. Think of it as strength in numbers. Broad momentum is hard to stop, Farrell observes. Watch for when momentum channels into a small number of stocks.

9. When all the experts and forecasts agree – something else is going to happen
As Sam Stovall, the S&P investment strategist, puts it: “If everybody’s optimistic, who is left to buy? If everybody’s pessimistic, who’s left to sell?”
Going against the herd as Farrell repeatedly suggests can be very profitable, especially for patient buyers who raise cash from frothy markets and reinvest it when sentiment is darkest.

10. Bull markets are more fun than bear markets
Especially if you are long only or mandated to be fully invested. Those with more flexible charters might squeak out a smile or two here and there.

How to Own Income Properties with Zero Vacancies


Can you imagine owning hundreds of rental homes?  Does that sound like a dream or a nightmare?

On this episode of the Real Wealth Show, Kathy interviews Eric from Chicago, Illinois.  Eric is part of a group that literally own hundreds of rental homes..and they have a zero vacancy rate!

Is that even possible?  It is when you have a 4 month wait-list for your properties.

Eric is a real estate enthusiast with a degree in finance from the University of Illinois.  He has personally sold over $100 million in real estate throughout Chicago and has managed a multimillion dollar private equity fund.

We asked Eric to be a guest on this week’s show for two reasons:

1. To learn how Eric and his team have developed a system for worry-free income properties.

A Technical Update on the Mini-Crash in GOLD

Let’s make one thing clear; nobody I know including myself predicted that Gold would drop from 1690 to 1625 inside of 48 hours this week. That was not in the charts and so I won’t even pretend I was going to see that train coming through the tunnel.

With that said, let’s try to let the dust settle but take a look objectively at some possibilities.

1. We all know that some FOMC minutes released did in fact cause some major downside in GOLD based on potential for eventual end to QE in the US down the road. It did cause stops to trigger, probably some margin calls, and then more stops creating a mini crash of near 4% on the Metal.

2. The ABC pattern appeared to be completed at 1634 last week, especially when we rallied over 1681 pivot. A brief dip to 1625 spot took place this morning early, and we now trade again around the 1631 pivot.
What are the technical options?
Well if we stick with traditional Elliott Wave Theory, we can see a potential 3-3-5 pattern still unfolding and wave 5 of C is now in play. 3-3-5 patterns have 3 waves down, 3 up, then 5 down to complete the entire ABC Structure.
To confirm this, we will want to see GOLD bottom here fairly soon in wave 5 of C.

Below is the updated chart of GLD ETF showing you this pattern. It’s the best I can do right now. I will keep you updated as things unfold. To be sure, I count this as cycle year 13 in the Gold bull market and I had Gold peaking in June of 2013 at 2280-2400 ranges per ounce, but we will have to see now if that is still valid or not based on whether this C wave can hold and reverse hard soon.

Which Central Bank Is the Most Leveraged?

ART CASHIN: The End Of The Bond Bull Market Will Be Signaled By A Stampede 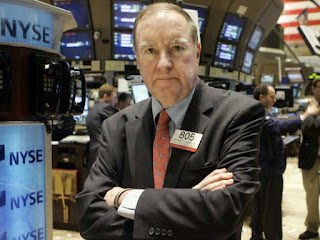 Bonds have been in a monster bull market for decades.


This has plenty of people believing that interest rates have nowhere to go but up.

However, we have yet to see a sustained upward move in interest rates, which would signal the end of the bond bull market.

Eric King of King World News spoke with UBS's Art Cashin to see when he thought the bull market would end:

Eric King:  “With the Fed increasing QE, and all of this money printing around the world, Art, what type of effects will we see in 2013?”
Cashin:  “Well, there are a couple of things to look at.  For example, we are beginning to see rates move up.  Some of that was based on the FOMC minutes.  The thing that I will watch for is mortgage applications.  If the public begins to believe that the trend in rates has turned, that rates are heading higher, I believe you may begin to see a stampede of people trying to lock up those low mortgage rates.
That will be a signal to me that the public is coming to believe that the great bond bull market is probably ending.  It will mean money coming out of bond funds.  So one of the key things I will be monitoring very carefully over the next month or two, is there new or explosive growth in mortgage applications?
Perhaps this is more good news than bad as rising borrowing costs would be at least partially offset by the economic activity triggered in the housing market.
Read more at KingWorldNews.com. It was Milton Friedman, not Ben Bernanke, who first made reference to dropping money from helicopters in order to prevent deflation. Bernanke’s now famous “helicopter speech” in 2002, however, was no less enthusiastically supportive of the concept. In it, he boldly previewed the almost unimaginable policy solutions that would follow the black swan financial meltdown in 2008: policy rates at zero for an extended period of time; expanding the menu of assets that the Fed buys beyond Treasuries; and of course quantitative easing purchases of an almost unlimited amount should they be needed. These weren’t Bernanke innovations – nor was the term QE. Many of them had been applied by policy authorities in the late 1930s and ‘40s as well as Japan in recent years. Yet the then Fed Governor’s rather blatant support of monetary policy to come should have been a signal to investors that he would be willing to pilot a helicopter should the takeoff be necessary. “Like gold,” he said, “U.S. dollars have value only to the extent that they are strictly limited in supply. But the U.S. government has a technology, called a printing press (or, today, its electronic equivalent), that allows it to produce as many U.S. dollars as it wishes at essentially no cost.”

Mr. Bernanke never provided additional clarity as to what he meant by “no cost.” Perhaps he was referring to zero-bound interest rates, although at the time in 2002, 10-year Treasuries were at 4%. Or perhaps he knew something that American citizens, their political representatives, and almost all investors still don’t know: that quantitative easing – the purchase of Treasury and Agency mortgage obligations from the private sector – IS essentially costless in a number of ways. That might strike almost all of us as rather incredible – writing checks for free – but that in effect is what a central bank does. Yet if ordinary citizens and corporations can’t overdraft their accounts without criminal liability, how can the Fed or the European Central Bank or any central bank get away with printing “electronic money” and distributing it via helicopter flyovers in the trillions and trillions of dollars?

Well, the answer is sort of complicated but then it’s sort of simple: They just make it up. When the Fed now writes $85 billion of checks to buy Treasuries and mortgages every month, they really have nothing in the “bank” to back them. Supposedly they own a few billion dollars of “gold certificates” that represent a fairy-tale claim on Ft. Knox’s secret stash, but there’s essentially nothing there but trust. When a primary dealer such as J.P. Morgan or Bank of America sells its Treasuries to the Fed, it gets a “credit” in its account with the Fed, known as “reserves.” It can spend those reserves for something else, but then another bank gets a credit for its reserves and so on and so on. The Fed has told its member banks “Trust me, we will always honor your reserves,” and so the banks do, and corporations and ordinary citizens trust the banks, and “the beat goes on,” as Sonny and Cher sang. $54 trillion of credit in the U.S. financial system based upon trusting a central bank with nothing in the vault to back it up. Amazing!  (more)

Please bookmark us
at 12:02 AM No comments: Links to this post