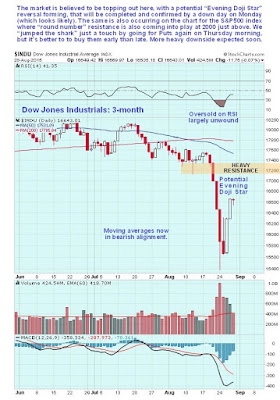 by Clive Maund
Gold Seek
We are believed to be at an excellent juncture right now to short the broad stockmarket (or buy bear ETFs and Puts). As we know, we did just that before the dramatic plunge early last week, and are now “sitting pretty”. Now is the time to add to positions, or if you haven’t any and are looking for the right shorting opportunity, this is it.
To see just why now is an excellent time to enter short positions or build on existing short positions (inverse ETFs / Puts) we will now look at the latest 1-year chart for the S&P500 index. All those who bought in the large rectangular pattern drawn on the chart, labeled the “Mug Pen” are like sheep huddled in a corral waiting to be fleeced. Even after the sharp rally late last week they are nursing significant losses, and if they get the chance to “get out even” or nearly so, they are going to take it. What is likely to happen is that they will almost get the chance, but not quite, because the market will turn down again soon, or immediately, and they will have to make a run for it if they want to avoid a severe fleecing. This means that as soon as the market starts to drop away again, they will stampede to unload stocks while they still can at reasonable prices, exacerbating the rate of decline. This is a big reason that another severe downleg is expected.
Continue Reading at GoldSeek.com…
at 12:03 AM No comments: Links to this post

Why So Much Oil Price Volatility? Blame The Speculators

Nick Cunningham via OilPrice.com,
Oil prices crashed last week only to rebound at lightning speed. On August 28, oil prices surged 10 percent, the largest one-day gain in seven years. So, what happens next for oil prices?

On the face of it, the crash and massive rebound makes little sense, with many oil market analysts undoubtedly left shaking their heads.
But there is a logic to what unfolded, just not the logic of the physical market for crude. Oil prices, as if we needed a reminder, are largely driven by speculation. Why else would oil prices plummet by five percent, then spike by 10 percent just a few days later? Not much changed in terms of actual supply and demand of oil in the intervening days. (more)
at 12:03 AM No comments: Links to this post

BlackBerry Ltd (NASDAQ:BBRY) showed relative strength today compared to rest of market, which is a very good sign. The daily technical chart shows new rally has begun as %K line has crossed on top of %D line and price broke through the major resistance of $7.50. This new rally should at least push the stock to $8 in nearest term. 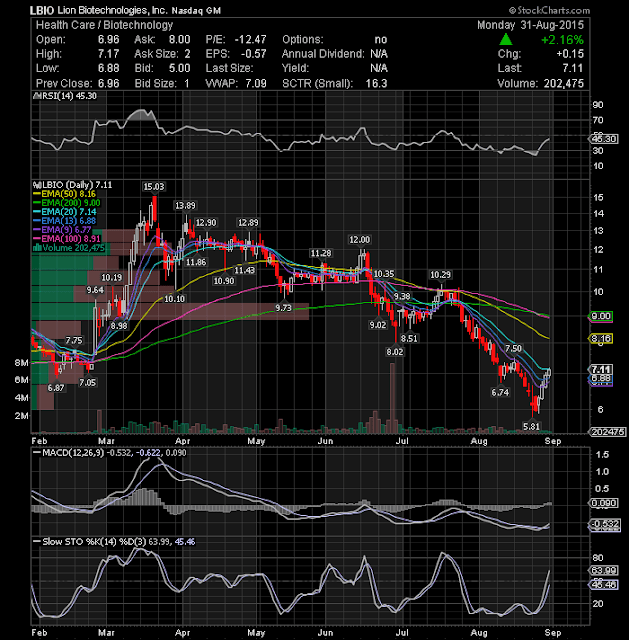 Shares of Lion Biotechnologies Inc (NASDAQ:LBIO) continue to surge. The stock is strong and getting stronger every day it seems. If it can close above $7.50 tomorrow, then expect more upside. Present technical indicators are in favor of Bulls. Im long. 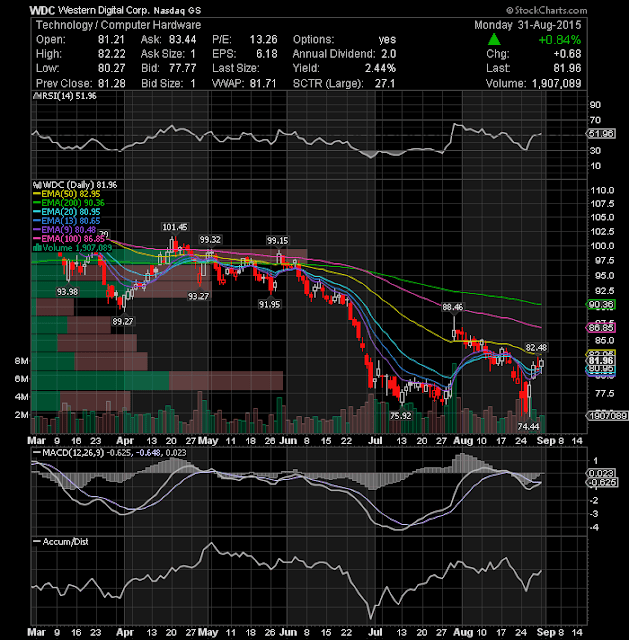 Western Digital Corp (NASDAQ:WDC) is showing early signs of reversal. A high volume move through the 82.95 price level would be buyable. The MACD is showing a positive divergence and the RSI is back above the 50 reading forcing me to think the possibility of a trend reversal.
at 12:03 AM No comments: Links to this post 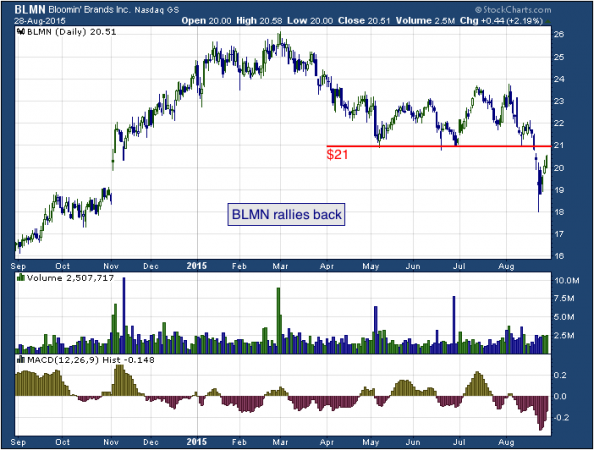 After its steady decline from the beginning of March into May, BLMN had been trading in an overall sideways move. During that time, the stock had also created an important level of support at $21 (red). Once the stock broke that support, lower prices followed, as expected. Traders could look for that $21 level to now act as resistance if approached.

The Tale of the Tape: BLMN broke a key level of support at $21. A trader could enter a short position on any rallies up to or near $21 with a stop placed above the level. If the stock were to break back above the $21 level, a long position might be entered instead.
at 12:03 AM No comments: Links to this post