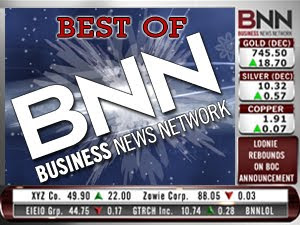 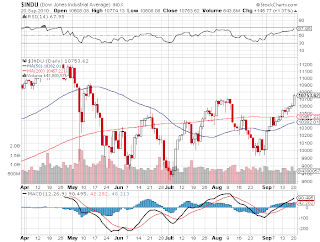 This is, a simple Dow Jones secret that would take the sweating and worries away from our trading sessions. There is nothing 100 percent accurate among trading systems, that's for sure, but my "Dow Jones Never Loss Trade" - set and forget system has showed that even without perfection it can make of you a profitable trader. You'll discover simple, easy-to-understand, easy-to-use and astonishingly effective technique that help you jump in and jump out of the market Automatically.. by setting one simple order.

Here's a fact that only the best, most successful traders know about: You don't need complicated, confusing fundamental or technical analysis to trade successfully.
It's easy like 1-2-3...

Simple systems based on logical, scientifically-sound, and well-tested concepts have been working extremely well -- and will continue to do so for many, many years to come. (click here)
at 12:24 AM No comments: Links to this post 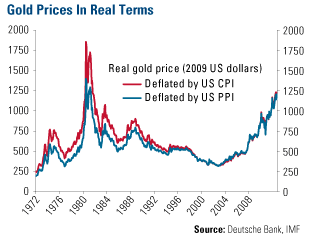 It’s no secret that we’re long-term bullish on commodities.

Our boiled-down viewpoint: there will likely be short-term volatility in the sector, but we believe the enduring strength of the global growth story being led by China and other key emerging markets will be a powerful demand driver in the years ahead.

Some of the research crossing our desks this week seems to line up with our thesis, and it also offers some perspective in the shorter term.

Goldman Sachs forecasts crude oil rising to $85 to $95 per barrel before the end of 2010 based on rising demand from emerging markets and limited supply response. It also sees gold at $1,300 per troy ounce in the next six months, and potentially even higher if the Fed comes out with another round of quantitative easing (QE). Oil and copper could also benefit in a QE scenario, Goldman says – more money created, more spending on key commodities. (more) 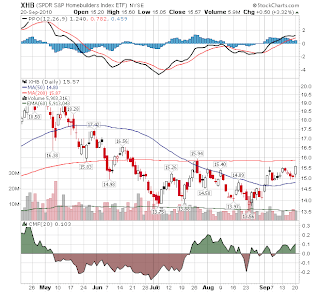 Homebuilders' confidence in the housing market stayed this month at the lowest level in 18 months, and more worry that the traffic of potential buyers is falling.

The National Association of Home Builders said Monday that its monthly index of builders' sentiment was unchanged in September at 13. The index has now been at the lowest level since March 2009 for two straight months.

Readings below 50 indicate negative sentiment about the market. The last time the index was above 50 was in April 2006.

The index is broken into three separate readings. Foot traffic from prospective buyers, an indication of future sales, fell slightly. The index measuring expectations for the next six months was unchanged. Current sales conditions were also unchanged.

"Americans by and large just aren't that excited about the prospect of buying a house," wrote Mike Larson, real estate and interest rate analyst with Weiss Research. (more) 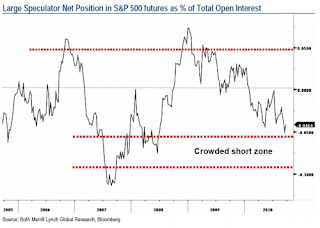 BofA's chief technical research analyst Mary Ann Bartels has released a note in which she demonstrates the bullish and bearish technicals currently in the market (although with the only thing mattering anymore is when and how big any given Fed permanent open market operation will be, we question the utility of technicals even). While Bartels is still holding on the a call for a "deeper equity market correction" while noting the obvious ("The equity market this year has frustrated both the bulls and the bears, and this is likely to continue into year-end, in our view") she points out that the broader market signals are mixed. She points out that "most short-term indicators have generated a sell signal and Net Tab is not oversold. We still need to break and hold above S&P 500 1150 to invalidate a potential head and shoulders distribution top. A test of the July low (1010) is still not ruled out. A break above1150 would point to a test of the April high of 1220." Today's action shows just how hard the market is trying to breach the upside resistance and disprove all the economic fundamentals that unequivocally point to an ongoing and accelerating deterioration in the economy. Below are the key charts supporting Bartels' call. (more)

According to Bloomberg, for the week ended September 17, corporate insiders bought $1.4MM in shares in a whopping 7 different companies. This was just marginally offset by sales of $441MM in 98 different companies, a ratio of 290 to 1 of stock notional sold to bought. But wait: this is GREAT NEWS: last week the ratio was 650 to 1! So this is a huge improvement and certainly yet another reason for today's rally, even though last week total notional sold was $332 million, or just under 25% lower, and sellers came in well lower at "just" 72. But who needs details when you have the Fed... Certain not retail, which has now pulled money out of domestic stock funds for 19 straight weeks. So for those wondering just who is orchestrating today's move higher, please let us know if you find out.
at 12:18 AM No comments: Links to this post

Sure, we may not have riots in the streets like the ones Greece has experienced over the last year or so. True, the Harper government continues to tell Canadians that compared to many other countries we are doing much better. But that doesn't mean Canada is in great shape.

Robson is not the only one who sees Canada's national debt as a problem. Between the time Parliament broke for its summer recess and when MPs return late Monday morning, a total of $14 billion will have been added to our national debt.

That's only half the problem.

When most people speak of Canada's national debt, they speak only of the federal component, which according to Canadian Taxpayers Federation debt clock, will stand at roughly $543,022,147,241.02 at 11 a.m. when MPs re-enter the House of Commons. Add in the debt of the provinces, territories and cities and the total government debt across Canada stands at $1.1 trillion US.

Kevin Gaudet, federal director of the Canadian Taxpayers Federation, puts that figure in slightly more relatable terms: $32,506 US for every man, woman and child in this country according to the Economist Magazine's Intelligence Unit. (more) 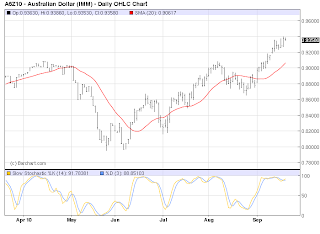 Good day... And a Marvelous Monday to you! Well... I did end up going to Columbia this past weekend after all. Tailgated with my kids, and then saw a game that wasn't exciting until the last minute! All-in-all, a fun time.

Speaking of fun times... That's what the currencies are having at the dollar's expense this morning, and while I've always said that the euro was the Big Dog, the star performer overnight is the Aussie dollar (A$)! The A$ is at a 2-year high VS the U.S. dollar, and is beginning to look a bit pricy, compared to the rest of the currencies in the world. But, we've seen this in the A$ plenty of times in the past. The A$ trades way past "fair value" because of the strong interest rate it pays.

The A$ is also getting some notice because the Reserve Bank of Australia (RBA) Gov. Stevens was in an upbeat mood in his speech last night, saying at one point that "Australia's growth in an increase from trend to something above trend, and that the fall in inflation over the past two years won't go much further."

This kind of talk brought the rate hike campers back in play... Although, I'm thinking that the RBA is finished with rate hikes this year. (more)

Will Silver Now Take the Lead? 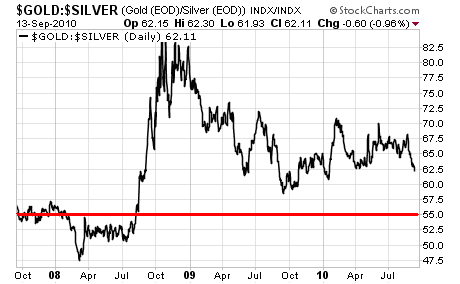 I've written about this ratio frequently, and I've pointed out that it is "mean-reverting", which is just a fancy way of saying that it eventually returns to the average. It's returned back to the average hundreds of times in the past 120 years - and it's one of the most reliable mean reverting ratios out there. It's the Old Faithful of the investment world.

With silver taking off, some investors might expect a correction. But even with silver prices north of $20, the ratio is still showing that silver prices are relatively cheap. (more)

The 10 Biggest Myths About Gold

Gold has been the investment phenomenon of the past decade. It hit a new high of $1,278 an ounce this week. In the past 10 years, investors in gold have made nearly five times their money. Over the same time, Wall Street has gone sideways.

But few investments seem to attract more myths and hokum than gold and other precious metals. At the risk of inflaming those on both sides of the issue, here are 10:

How can anyone know this? Nobody even knows what gold is worth, so it's impossible to say with any confidence that it's overvalued (or undervalued, for that matter). Some perfectly intelligent people, such as Dylan Grice, a strategist at SG Securities, argue that when compared to the ballooning money supply, gold is still low by historic standards. And even if gold is in a bubble today, it may have a long way to go. As I've pointed out earlier this year, as our accompanying chart shows, at a comparable stage Nasdaq (1998) and real estate (2003) still had a couple of years to run. (more)

The worst U.S. recession since the Great Depression ended in June 2009, the National Bureau of Economic Research said today, as a slowdown in economic growth raises the possibility of another slump.

“We are still expanding, but disappointingly slowly,” Robert Hall, a Stanford University economics professor who heads the NBER committee charged with dating business cycles, said in an interview. “It’s still too early to tote up the cost, given that we are still far from recovered from its effects. It’s definitely the worst apart from the Depression, which was far, far worse.”

The decision came as Federal Reserve policy makers meet this week to consider whether new measures to boost growth are needed and the Obama administration proposes additional fiscal stimulus. Bruce Kasman is among economists projecting the world’s largest economy will not grow enough to lower joblessness, which has been hovering near 10 percent. (more) 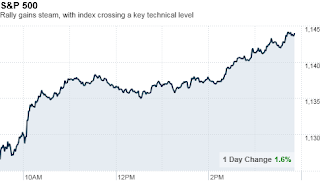 (CNNMoney.com) -- A U.S. stock rally continued to pick up speed through Monday afternoon, with all three major indexes closing at four-month highs after a key group of economists called an official end to the recession. The Dow Jones industrial average (INDU) gained 146 points, or 1.4%, to end at 10,753, its highest close since mid-May. The tech-heavy Nasdaq (COMP) rallied 40 points, or 1.7%, to finish at 2,355.

"The S&P has tried to sit above the 1,130 level in June, August and last week but failed, so the fact that it has broken up above that point and is staying there is considered a positive sign for the bulls and forcing traders to come back in," said Donald Selkin, chief market strategist at National Securities. (more)