Long Tesla $TSLA? Now Is The Time To Exit 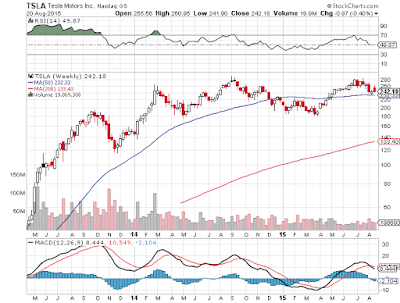 Tesla Motors Inc TSLA is one of the Street's most debated stocks. On the one hand, Trip Chowdhry of Global Equities Research thinks Tesla's stock is worth $385 as the company is strategically positioned to dominate the upcoming $1 trillion "TaaS" Industry.

On the other hand, Michael Lingenheld, managing editor of Cup & Handle Macro, has "given up" trying to understand why Tesla's stock trades at the levels it does.

"At $250 per share it doesn't even have a P/E multiple because it's unprofitable, and constantly fails to meet delivery targets," Lingenheld argued in a research note. "In Tesla's second quarter earnings announcement, CEO Elon Musk acknowledged they might not hit the previous goal of delivering 55,000 vehicles this year – yet again."

Lingenheld continued that this was "not a shock" and Tesla's stock dropped 8 percent – only to rebound and trade above its pre-earnings level, despite a fresh share issuance. He attributed the rebound to a report by Morgan Stanley analyst Adam Jonas who placed a $465 price target on Tesla, which would value it at $60 billion, or "more than $1 million for each electrical car it will produce this year."

"Why these analysts can make such arbitrary predictions and have the market react to them is beyond me and it reeks of Mary Meeker in 2001," Lingenheld argued. "It seems futile to short Tesla because it trades on hype but, if you're long, now is the time to exit."

Bottom line, Lingenheld did acknowledge that Tesla is "one of the more amazing" companies in existence today. As such, he said the stock could "easily" hit $465 "at some point," but there will likely be "major turbulence" along the way.

Chart of the Day Novavax $NVAX 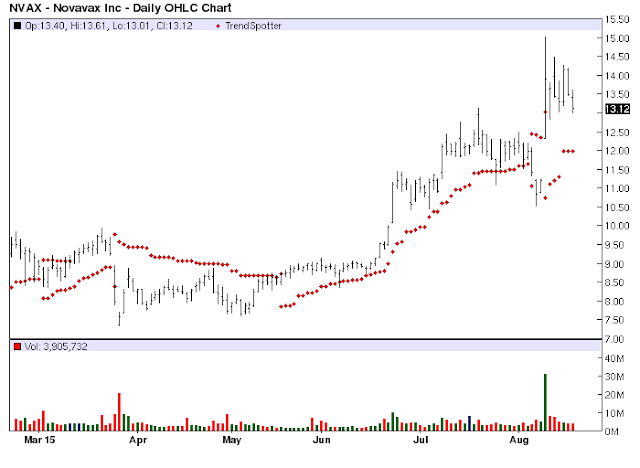 Novavax is a specialty biopharmaceutical company engaged in the research, development and commercialization of proprietary products focused on women's health and infectious diseases. Their technology platforms involve the use of proprietary, microscopic, organized, non-phospholipid structures as vehicles for the delivery of a wide variety of drugs and other therapeutic products, including certain hormones, anti-bacterial and anti-viral products and vaccine adjuvants.

technical indicators:
Fundamental factors:
at 12:03 AM No comments: Links to this post

WP Glimcher Inc., incorporated on December 13, 2013, is a self-administered and self-managed real estate investment trust (REIT). The Company is engaged in ownership, development and management of retail real estate. Washington Prime Group, L.P. (WPG L.P.) is the Company’s subsidiary that owns, through its affiliates, all of the Company’s real estate properties and other assets. As of December 31, 2014, the Company’s assets consisted of interests in 97 shopping centers in the United States, consisting of strip centers and malls.
Washington Prime Group Inc. operates independently of Simon Property Group Inc. as of May 28, 2014.
Take a look at the 1-year chart of WP Glimcher (NYSE: WPG) below with my added notations: 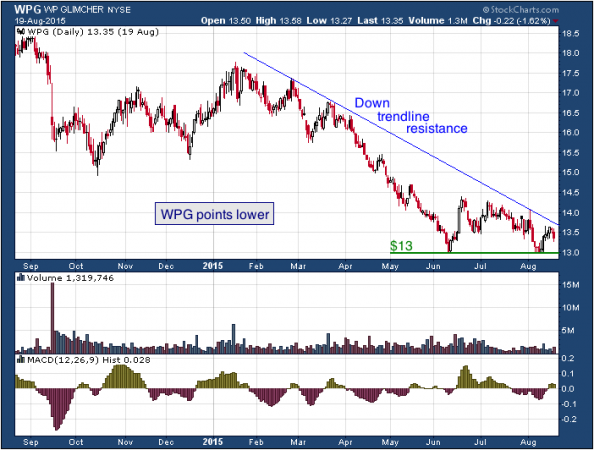 WPG has been trending lower for the past 8 months. Over that time, the stock has formed an important trend line of resistance (blue). Any (2) points can start a trend line, but it’s the 3rd test and beyond that confirm its importance. WPG’s trendline resistance currently sits right around $13.60.
The stock appears to be on its way down to its $13 support (green).

The Tale of the Tape: WPG is currently stuck under a down trending resistance. A break above that resistance should mean higher prices, thus a long trade could be made either then, or on a fall to the $13 support. Short traders might look to enter a trade at the resistance or on a break of support.
at 12:03 AM No comments: Links to this post

3 Factors Driving The Rally In Gold 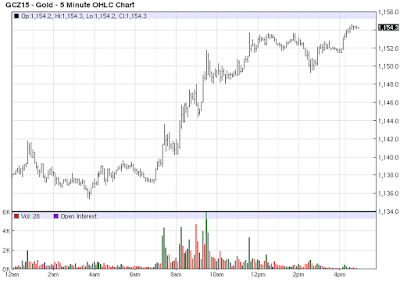 The inverse correlation between crude oil prices and gold is playing out to the core recently. While crude oil slumped heavily over the last 20 days, the opposite has happened with gold. From breaking down the 41,100 mark in late July, the yellow metal has recovered significantly and breached the $1,150 mark after more than a month.
Bob Alderman, head of wealth management at Gold Bullion International, was on CNBC Thursday to discuss what is driving gold's rally.

"We think there are three drivers that are in the market right now: the Fed, China – and I'll also couple in other emerging market currencies with China in terms of currency devaluation – and short covering," Alderman began. "I think, as far as the Fed goes, the dovish comments yesterday certainly led many to believe that there will be no rate change until at least December."

He continued, "As far as China goes and, I think, it's very important...to also add in that there are other countries and other emerging market countries that have suffered far greater currency devaluations that China has, although China is the one we point to."

"And then short covering, I think, what's happened over the last week or two is with so few contracts being long, short positions topped out at about 159,000 a couple of weeks ago. I think these shorts are providing fuel to exaggerate upside moves as they run for cover," Alderman concluded.