Stock investors haven’t been this bearish in 15 years 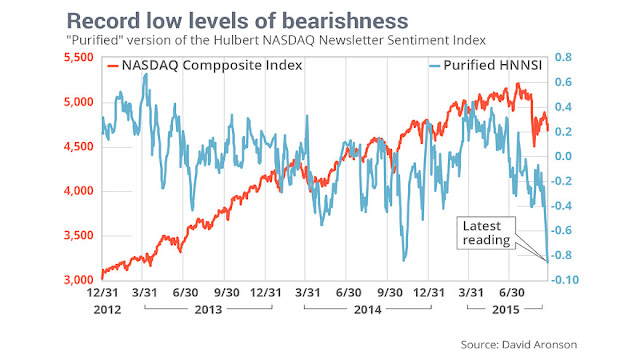 Bearishness has reached an extreme not seen at least since the top of the Internet bubble in early 2000.
Yet this is a bullish omen, according to the inverse logic of contrarian analysis: Extreme levels of bearishness indicate that there is a very robust “wall of worry” for the market to climb.  (more)

It has been a number of months since we last looked at the USDCAD relationship and the CBOE 30 Yr Interest Rate, and in the that time there have been some interesting movements in both those charts. So for this week's SIA Equity Leaders Weekly we are going to look back on both of these and see what has happened recently.

Back on July 15th, 2015 we reported that the currency pair just broke through resistance at the $1.2854 level and was closing in on further resistance at $1.31. Looking at the chart we can see that the USDCAD broke through that level earlier this month and is now wide open for further possible moves up to the $1.40 major resistance and psychological level. If by chance the momentum runs out, support levels are now seen at $1.2727, $1.1870, and lower at $1.1182.
With the continued strength in the US dollar we have seen the continued weakness in most commodity influenced economies as well as specific investments within both the Energy and Materials sectors.
Click on Image to Enlarge When we last looked at the TYX.I back in mid-May, we discussed the substantial bounce off the 2.442% level up to resistance at around 3.097%. Up until late June, the index continued its upside move all the way up to current resistance at 3.272%. But since then, we have been range bound between the 2.709 support and that 3.272 resistance.
Much of the tug-a-war has to do with the continued debate on the strength of the economy, inflation outlook, and the never ending discussion on possible interest rate hikes by the Federal Reserve in the US. Last weeks decision not to raise rates but comments afterwards that a rate increase this year still remains in the cards added continued uncertainty as to the when, and by how much.
What is interesting is that the SMAX is still at a 10, again showing short term strength across all the asset classes.
Both of these charts continue to give us relevant information that we need to monitor in order to make important decisions for our clients. Further updates can be anticipated.
Click on Image to Enlarge 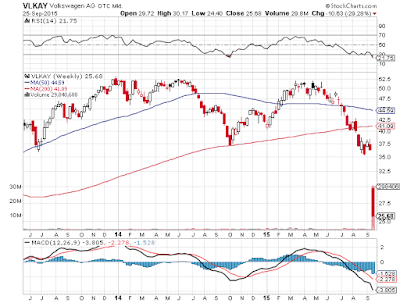 Volkswagen, a German auto manufacturer with 212 billion Euros in revenue over the past year, was on a public opinion collusion course this past week after the company was caught cheating on its emissions tests.
The backlash caused Volkswagen's stock price to tumble sharply and its CEO, Martin Winterkorn, announced his resignation.
A look at the stock price chart will show just how material this piece of news was to the wellbeing of the stock. However, as with all major drops in such a short time span, we need to understand if it is warranted, or if investors are simply looking to cash out.


A good example of a time when significant news broke out, investors fled, and then the stock recuperated thereafter, was the Deepwater Horizon oil spill, involving an O&G giant, BP. Following the explosion and sinking of the Deepwater Horizon oil rig, a sea-floor oil gusher flowed for 87 days, until it was capped on July 15, 2010. BP's stock was slashed in half, but has bounced back quite substantially several months post-incident.
BP BP 0.9% – July 2009 – July 2011

Just goes to show that stock markets are never fully efficient, and it takes time for investors to figure out the real material impact of a major news event. In the case of Volkswagen, we may see a similar bounce. Volkswagen's woes seem to weigh on other auto-related stocks, such as the ones on our list, but they too seem poised to recover.

Is This Why Biotechs $NBI Are Tumbling: "Head And Shoulders Top" Spotted In The NBI 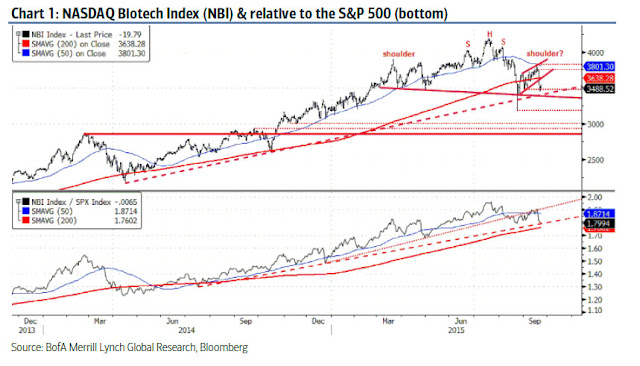 While no chart could have possibly predicted the populist outcry against Martin Skreli's widely publicized, and panned, decision to crassly boost the price of a Toxoplasmosis drug by over 5000% (doing something all other biotech companies have been doing but with all the grace of a bull in a china shop thus prematurely ending the party for everyone) only to promptly undo his decision following a furious public backlash which also resulted in Hillary Clinton proposing a price cap on specialty drugs and unleashing the worst drop for biotech stocks in 2015, now that concerns about a biotech top are in play, the biotech sector just can't seem to catch a bid, and as of moments ago was down over 3% dragging the Nasdaq just barely positive for the day even with the S&P up 0.8%
One reason for the continuied weakness may be that, as Bank of America points out, there are signs the dreaded head and shoulders top has appeared in the Nasdaq Biotech Index. (more)
at 12:03 AM No comments: