The Canadian Housing Bubble Puts Even The US To Shame

Since the bursting of the first US housing bubble in 2007, one of the primary explicit goals of the Fed has been to reflate the very same housing bubble (whose pop, together with the credit bubble, nearly wiped out the western financial system) as housing, far more than stocks, is instrumental to the "wealth effect" of the broader population (as opposed to just the 1%).
Sadly for the Fed, instead of recovering previous highs, median housing prices (not to be confused with the ultraluxury high end where prices have never been higher) have stagnated and are now in the downward phase of the fourth consecutive dead cat bounce, curiously matching a like amount of Fed monetary injection episodes.
But while the Fed has clearly had a problem with reflating the broader housing bubble, one which would impact the middle class instead of just those who are already wealthier than ever before thanks to the Russel 200,000, one place which not only never suffered a housing bubble pop in the 2006-2008 years, but never looked back as it continued its diagonal 'bottom left to top right' trajectory is Canada. As the chart below shows, the Canadian housing bubble has put all attempts at listening to Krugman and reflating yet another bubble to shame.

Here is the Globe and Mail's take:


The gap between the average price of a home in Canada and the United States widened to a record level in the first quarter of this year, contrary to what economists would have expected, according to Bank of Montreal’s chief economist Doug Porter.

Average Canadian home prices were 66 per cent above average U.S. prices during the first three months of this year, he says. (Note: these are prices for existing houses and condos, not those that are newly constructed).

“The main takeaway is that, contrary to all expectations, the Canadian housing market has just kept on rolling in 2014 even as the U.S. housing market has  paused for breath (after a steep climb out of the dungeon),” he writes in a research note. “Put it this way, how many pundits a year ago were calling for Canadian home prices to rise faster than their U.S. counterparts in any single measure?”

It's worth noting that there are many problems with comparing average Canadian home prices to average U.S. home prices, not the least of which is that average prices themselves can be highly misleading. Mr. Porter is aware that it’s not an apples-to-apples comparison.

“Some may quibble that this doesn’t take the exchange rate into account, but even adjusting for the Canadian dollar leaves a 50 per cent price gap,” he writes.


So if indeed the Fed is intent on reflating the housing bubble for all, not just for some, perhaps it is time to take a look at what the northern neighbor is doing and do the same.  Of course, the question remains how much more "up and to the right" movement is left in Canadian home prices, where the Chinese and Russian oligarch bid is, according to some, an even greater factor in setting marginal prices than in the US and Hong Kong.
Please share this article
at 12:04 AM No comments: Links to this post 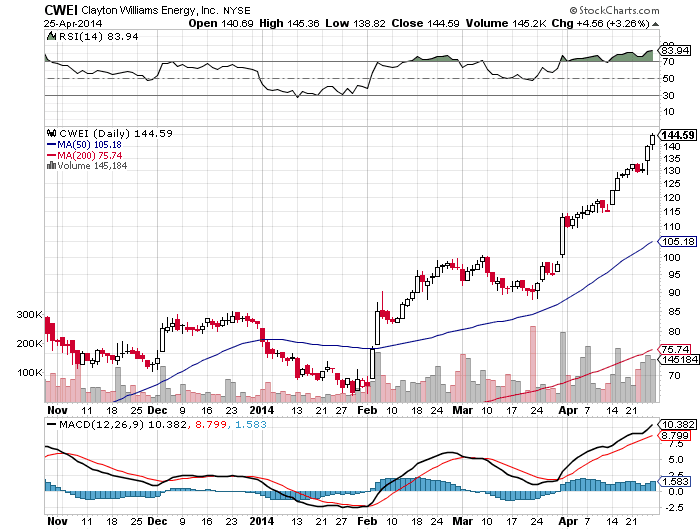 The Chart of the Day is Clayton Williams Energy (CWEI). I found the stock by sorting the New High List for new high frequency in the last month then reviewed the charts using the Flipchart feature. Since the Trend Spotter signaled a buy on 2/5 the stock is up 70.72%.

CWEI is an independent oil and gas company engaged in the exploration for and development and production of oil and natural gas primarily in Texas, Louisiana and New Mexico. A significant portion of the company's proved oil and gas reserves are concentrated in the Cretaceous Trend, which extends from south Texas through east Texas, Louisiana and other southern states and includes the Austin Chalk, Buda, and Georgetown formations.

According to a 2012 study conducted by IHS, wearable technologies will account for more than $6 billion in sales in the year 2016.
The world market for such things as smartwatches, health-monitoring bracelets, smart clothing, and whatever else the geniuses in the R&D departments of today's tech leaders come up with is expected to hit an estimated 171 million devices — a greater than 10-fold increase from the 14 million figure cited at the time of the study. 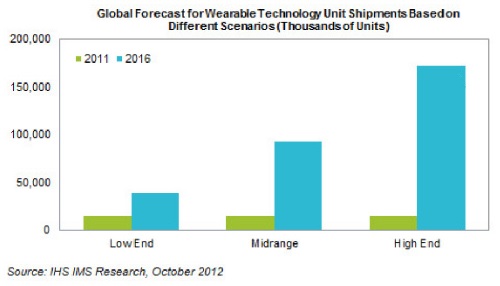 Of those 171 million devices, a vast majority will be privately-owned gadgets worn outside of a work setting for doing things like taking photos, sending and receiving messages, engaging with social networks, and the rest of the functions you generally expect from your current smartphone.  (more)
Please share this article
at 12:03 AM No comments: Links to this post