Investors are finding out what everybody else already knew: The consumer isn’t going to spend the economy into recovery.

Major U.S. stocks indexes tumbled by the biggest amount in six weeks Monday as investors grew worried that they have been too quick to bet on an economic rebound during the market’s five-month rally. Overseas markets plunged and investors’ demand for safe-haven investments sent the dollar and Treasury prices shooting higher.
The Dow Jones industrial average skidded 186 points and the major indexes fell at least 2 percent. The Nasdaq composite index was hardest hit, falling 2.8 percent, but it also had the biggest advance as Wall Street rallied this year.
A shudder in China’s main stock market touched off a wave of selling that spread to Europe and then the U.S. A drop in quarterly profits at home improvement retailer Lowe’s Cos. added to worries that an improvement in the economy is far off. (more)

The US-UK 10 year yield spread has risen to -2.10%, the best (US-favourable) level since June 24th, highlighting the dollar’s recovery against the British pound. More on GBPUSD below.

The 5.8% decline in the Shanghai Composite, the $2.50 decline in crude oil to $65.80 ($7.00 decline since Friday) and broad losses in govt bond yields are amid the many manifestations of deepening risk aversion in the aftermath of disappointing US consumer confidence and Colonial Bank’s failure, which is the 5th largest bank failure in the US. Markets shrugged the first increase in US industrial production in 9 months and focused on renewed declines in US consumer sentiment. The resilience of the US consumer is paramount in stabilizing waning US corporate revenues.

FACT: Although over 61% of S&P500 companies beat their Q2 earnings estimates, about 75% reported lower sales. This means that exceedingly low estimates and aggressive cost-cutting were the two main factors in propping earnings season. At which point will recovering US demand must come to the rescue of falling sales and dissipating profit margins is the question for the current quarter. Hence, the importance of US consumers and their employment prospects stands more relevant than recovery in industrial production

Sterling Signal More Losses Renewed declines in UK house prices as measured by Rightmove have intensified sterling’s selloff as compounded by overall risk aversion and last week’s dovish statements from the Bank of England. Sterling drops below its 50-day MA (currently $1.64) for the first time since March—when the Federal Reserve announced the purchases of US treasuries, an event that triggered the 4-month sell-off in the US currency and simultaneously cemented an intermediate bottom in GBP. But now that the Fed has signalled slower Treasury purchases at the same time that the extended its quantitative easing, sterling is set to break below this key technical level, extending losses towards $1.6250 and $1.5800. Last week’s BoE dovish justification to expand QE not only stated inflation would undershoot the 2% target in 2 years, but also stated the possibility of sub-1.0% inflation as early as autumn. The week’s CPI and retail sales data are considered viable fundamental catalysts for prolonged GBP losses.

Many have called attention to the Shanghai Composite’ failure to recover above that 1-day 5% decline of June 27. Today, the index is 17% below its all time high, reaching 7-week lows. The subsequent impact on emerging market bourses is gradually weighing on commodities, making energy the biggest victim.

Plunging Oil Prices are considered to be the more significant price action for any notable recovery in the US currency to take place. While many did see previous pullbacks in gold, equities and bond yields over the past 3 weeks, oil prices remained generally supported partly due to sustainable gains in emerging market bourses. But with the prolonged losses in EM and broadening losses in metals, the ensuing sell-off carries the technical properties required for extending losses towards $63.9500 and the key support of $58.00—38% retracement of the rally from the $33.49 low to the $73.40 high.

Maintaining our CAD-negative stance as oil prices accelerate their losses and equities broaden selling into G-5 indices. But interventionist rhetoric from CAD officials and deteriorating figures from Canada (payrolls and housing starts) have also accelerated selling in the loonie. Wednesday’s July CPI figures will likely validate the case for the BoC’s quantitative easing as annual CPI remains below 2.0%.

Eric Chang
at 10:36 AM No comments: Links to this post

The rise in Japan's second-quarter gross domestic product, its first quarterly growth in five quarters, did little for markets, as it was largely in line with expectations. GDP grew 0.9% from the quarter before, compared with a 1.0% rise tipped in a Dow Jones Newswires poll of economists. (more) 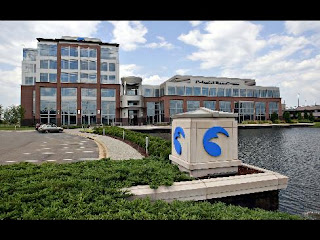 More than 150 publicly traded U.S. lenders own nonperforming loans that equal 5 percent or more of their holdings, a level that former regulators say can wipe out a bank’s equity and threaten its survival.

The number of banks exceeding the threshold more than doubled in the year through June, according to data compiled by Bloomberg, as real estate and credit-card defaults surged. Almost 300 reported 3 percent or more of their loans were nonperforming, a term for commercial and consumer debt that has stopped collecting interest or will no longer be paid in full. (more) 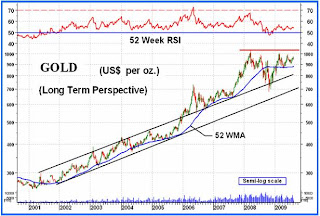 THE COMMODITY WORLD IS GROWING IN STRENGTH

The commodity market is bubbling. Whether it be sugar reaching a three year high, copper and other base metals reaching almost one year highs, or oil and gold rising further. The markets are looking good.

They're moving up on signs that the global recession is easing. This is boosting demand, especially in China and Asia, which is pushing prices up.

Tangibles are growing in strength. From the metals, natural resources, energy and food, these markets are rebounding strongly and they're poised to continue rising in the years ahead. Demand is the driving force, making commodities a powerful market.

The Chinese are astute investors. They're buying up lots of hard assets and commodities for infrastructure, and they're using their dollar reserves to buy these goods. (more)

Collapse Of The "Ownership Society"

The Obama administration, in a major shift on housing policy, is abandoning George W. Bush’s vision of creating an “ownership society’’ and instead plans to pump $4.25 billion of economic stimulus money into creating tens of thousands of federally subsidized rental units in American cities.

The idea is to pay for the construction of low-rise rental apartment buildings and town houses, as well as the purchase of foreclosed homes that can be refurbished and rented to low- and moderate-income families at affordable rates.

Analysts say the approach takes a wrecking ball to Bush’s heavy emphasis on encouraging homeownership as a way to create national wealth and provide upward mobility for low- and working-class families, especially minorities. Housing and Urban Development Secretary Shaun Donovan’s recalibration of federal housing policy, they said, shows that the Obama White House has acknowledged that not everyone can or should own a home. (more)
at 5:23 AM No comments: Links to this post

What Assets Are Going To Beat Inflation In the Coming Ten Years?

"So what do you think? Would you try it?"

Last night was trivia night in Elwood. Your editor sat across from Australian Wealth Gameplan editor Kris Sayce. Between questions about how many venomous snakes there are in Australia and whether New South Wales is larger than South Australia (it's not), we found the time to query him about whether buying inflation indexed bonds from the Australian government was a good investment strategy.

"The problem with them," he said, "is that you're relying on someone else to tell you what the rate of inflation is. That someone else is the government. And they are probably lying about it. It doesn't really offer you a hedge against inflation of they are under-reporting the real inflation rate." (more)