5 Oversold Stocks Due for a Rebound Before Year-End

The post-election sell-off continued on Thursday as investors considered whether a change to their year-end outlook was warranted. While we believe that there have been some fundamental changes to the investing landscape, we remain confident that the short-term selling pressure is presenting a buying opportunity for those traders willing to hunt for "deals."


These situations in the market are exactly why investors and traders alike need to be able to focus on technical measures to identify opportunities. We like to refer to it as "trading by instrument." Much like a pilot flying through cloud cover finds the need to fly according to the gauges on their dashboard, investors need to use technicals to trade when the fundamentals get cloudy.

With that in mind, we're closely watching our gauges for trading opportunities. At this time, keeping an eye out for technically oversold stocks that are still trading above their respective 100-day moving averages is a great way to find potential trade opportunities.

To give you an idea of how much that filter cuts down the market right now, of the 2,300 or so optionable stocks trading in the market, only 104 of them meet this criteria. The top 20 of those stocks (and ETFs) ordered by average trading volume are listed below.

According to our seasonality work, energy stocks often outperform the market in November, which is a nice bonus for Exxon Mobil (NYSE: XOM). This relative strength leading stock has set the stage for a year-end rally as strong seasonality is combining with increasing demand. The pullback to XOM's $88 level offers an opportunity to buy this stock before it heads back to its highs near $94, and beyond.  (more)

Now that the presidential election is over we can hopefully look forward to some respite from the perpetual bombardment dished out by both the Republican and the Democratic Party machines. President Obama has been re-elected so we can expect four more years of a Washington centric controlled economy with a rolling program of borrow, print, spend and pretend, similar to the last four years. The so called fiscal cliff will not be met head on, the approach will be one of extending some of the tax cuts now in place and a watered down strategy of fiscal prudence. Budget ceilings will come and go and the deficit will grow ever larger as the economic recovery will be considered far too fragile for any serious attempts at financial reform. All in all nothing has really changed, the slow motion train crash will continue and the fallout will affect everyone.
One of the casualties will be the dollar as quantitative easing will be applied in ever increasing doses, devaluing the dollars’ worth and its buying power. However the race to the bottom is alive and well as other nations will adopt similar strategies in an attempt to remain competitive and so Act Two reads like Act One.
Read More @ OilPrice.com
at 12:05 AM No comments: Links to this post

To review the H&S pattern that has formed on Hologic's stock, please take a look at the 1-year chart of HOLX (Hologic, Inc.) below with my added notations: 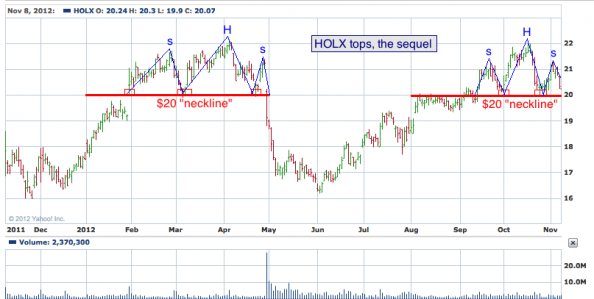 HOLX has been trending higher since June. Over the last (2) months though, the stock has created a key price level at $20 (red), which would also be the "neckline" support for the H&S pattern. Above the neckline you will notice the H&S pattern itself (blue). Confirmation of the H&S would occur if HOLX broke its $20 "neckline" support. If that happens, the stock should be moving lower from there.

One needs to look no further than this past April to see what could result if HOLX breaks $20. The stock created an H&S pattern then too with the same $20 support.
at 12:04 AM No comments: Links to this post

4 Must-Own Funds for the Looming Recession

The election is in the books, and after all of the hoopla, debates, campaign ads, and overblown rhetoric, the government is basically the same today as it has been for the past two years. President Obama is at the helm of the executive branch, Democrats remain in charge of the Senate, and Republicans remain in control of the House of Representatives. This is basically the same group of politicians that last summer put in place a stop-gap measure on the debt ceiling that's led us up to the so-called "fiscal cliff."


Indeed, Wall Street (and the rest of the world) has started to fear the worst when it comes to the damage inflicted by a poisonous cocktail of automatic spending cuts to crucial sectors such as defense, and automatic tax increases. The combination of these two events could take a $600 billion-plus bite out of GDP, so it's no surprise that traders, investors and really anyone with skin in the economic game is so worried about a potentially disastrous outcome.

Resolving this issue will likely be a game of brinksmanship on both sides; however, time is of the essence. Some semblance of a solution to avoid the automatic cuts and tax increases must be worked out by Dec. 31, or the country could be staring down the barrel of a recession.

Now, as they so often due, commodities traders already have begun to foreshadow a coming recession. If we look at the action in Wednesday's trade, we see that gold and grains moved higher, and were basically the best performers in the commodity pits. Conversely, we saw a big sell-off in energy and base metals.

Traditionally, commodities such as gold and grains are not driven by economic growth. The flipside here is that commodities such as energy and base metals are very much fueled by economic growth. The thesis here is that if the fiscal cliff fails to get resolved in time, or even if there is some patchwork, kicking the can down the road like last year, then the economy is in for some very choppy waters.

On the long side, there are funds such as the SPDR Gold Shares (NYSE: GLD), which is pegged to the spot price of gold, and the PowerShares DB Agriculture (NYSE: DBA), a basket of commodities such as cattle, coffee, corn, sugar, lean hogs and wheat.

Here's a breakdown of the trades as I see them:

According to my friend and colleague, Tom Essaye of The 7:00's Report, "The market is pricing in the expectation that fiscal cliff negotiations will drag on, and reduce economic activity, just the way the debt ceiling debate in the summer of 2011 did."
If Tom is right, and he almost always is, then these pair trades could make you a tidy recession/fiscal cliff profit in the weeks to come.

Peter Schiff and Ron Paul have been calling this "fiscal cliff" for years and years. But general public are﻿ too oblivious to heed the advice. Mike gets lost﻿ in details that have nothing to do with the fundamentals of money. What is money & how money is created and traded. The trap was set in the wee hours of Dec night in 1913 with passage of the Federal Reserve Act. That trap was sprung when Nixon, w/o any Constitutionally granted authority, reneged on international trade agreements to tie US Dollars to gold reserves. The ability to create money from nothing was thus borne and the collapse of economies around the globe begun.
at 12:04 AM No comments: Links to this post