Why is the U.S. in Decline?

Risk and returns often go hand-in-hand, and income hunters who are willing to stomach a little more risk can look overseas for attractive dividends in globally focused exchange traded funds.

With the Federal Reserve depressing yields on U.S. government bonds, investors have branched out to riskier investments for yields. [Surveying the Dividend ETF Landscape]

"What we have is money that had typically gone to fixed income now coming into equities," Chris Wallis, chief investment officer of Vaughan Nelson Investment Management, said in a Wall Street Journal article. "They're looking for bond substitutes and it doesn't mean that the money is going to exit and go either to cyclical stocks or go to cash. I think it's going to stay where it is."

For starters, the Global X SuperDividend ETF (NYSEArca: SDIV), which tracks the performance of 100 equally-weighted companies with some of the highest dividend yields in the world, comes with a 7.67% 12-month dividend yield and a 0.58% expense ratio. The fund is up 11.3% year-to-date.

Total collapse. That is the only way to explain what just happened with the Chicago PMI which imploded from 52.4, and printed at a contractionary 49: the first sub-50 headline print since September 2009. But that’s not all: Deliveries, Prices Paid and Production all hit their lowest since 2009; Backlogs posted their tenth month of contraction in the past 12 months. And what’s worst for the Department of Making Shit Up, Employment plunged from 551. to 48.7, its third month over month decline. Actually another way to phrase it: complete disaster. Obviously this number explains why S&P should have no problems crossing 1,600 today. Because for that other Department: of Propaganda and Creating money out of thin air, this means only one thing: the Fed is preparing to print ONE KROOGOL MORE!
Read More @ ZeroHedge.com

I am basing this conclusion on price charts, although I could also create a fundamental scenario to support the conclusions. I may reference a few of the fundamentals without comment herein. I provide this caveat — the technical bull case still has to be proven. Markets are about possibilities, not probabilities and not certainties. If you want probabilities, find a different blogger.
The long-term Meal charts are quite constructive. Consider the quarterly bar chart. The advance in early 2008 completed a massive 34-year base. The market then experienced a hard retest of the base starting in mid 2008. The rally in June 2012 confirmed the base and completed a 4-year symmetrical triangle. The weakness since September 2012 has been a retest of the triangle. 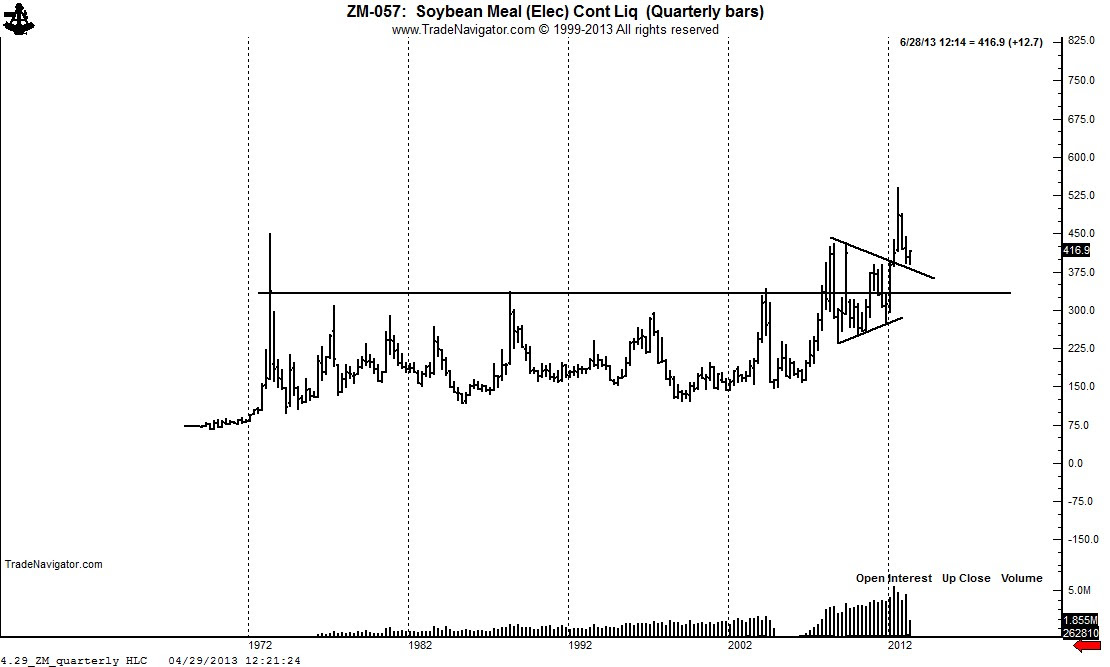 The concept of classical charting is based on a tendency of markets with certain construction to repeat. By way of comparison, look at the quarterly chart of Silver. The current Meal chart has many similarities to what the Silver chart showed a few years ago. (more)

My favourite moment of the working day is doing a dot-to-dot. And it happens every morning, after booting up my computer; I look across the various asset classes, and start connecting the dots.
After the first few screens, it becomes progressively easier to predict what is coming next: dollar down = risk on, equities up = bond prices down, risk off = metals down. But joining the dots has gone askew recently. So from the starting point of mortgage rates to a crude conclusion, here’s how joining the dots isn’t as simple as going from A to B.
Whether financial markets float your boat or not, what is a useful thing to know if you have a mortgage, want to buy a house, or want to refinance, is the biggest influence on mortgage rates. And while logic dictates that a 30-year government bond would be a decent guide for a 30-year mortgage rate, that would be somewhat inaccurate. It is actually a 10-year treasury bond:
Read More @ OilPrice.com

Poland is one of the few countries in Europe that has shown an ability to weather the economic crisis in the Euro-zone. The country’s solid economic performance despite the weakness in many of its neighbors can be attributed to the internal strength of the economy, and its minimal exposure to distressed southern European states (Poland ETF Investing 101).

However, the economy, which survived the four years of economic crisis, is beginning to show new signs of weakness.

Reduced government spending along with waning consumer confidence resulted in slower growth of the economy in 2012. The government, in an attempt to scale down the deficit level to EU's requirement of below 3% of GDP, has made significant cuts in spending.

Further, lower export demand attributable to the deepening crisis in the Euro-zone also dampened the growth of the economy to some extent. Slashed public investment along with stagnation in the housing market is leading to a deep recession in the construction sector.

For the last several weeks, the 10-year T-bond yield has been declining as the stock market (S&P 500) has been rising or working sideways:

Source: Bloomberg
Over time, T-bond yields tend to be positively correlated with the stock market: 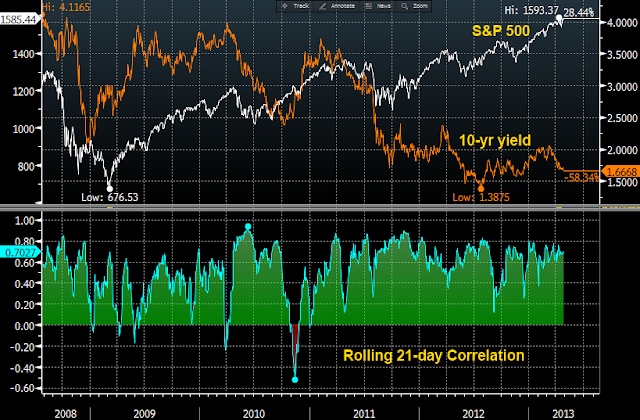 Source: Bloomberg
In general, as the stock market rises, so too does the 10-year yield, and vice versa. There are a few good reasons for why this correlation should hold, one being rising T-bond yields infer the economy is strengthening. Typically low government bond yields are due in large part to the Fed keeping rates low for the benefit of an anemic or ailing economy. Signs of economic growth are going to make it less necessary for the Fed to maintain such low rates, in effect framing rising yields as a bullish indication for equities. Another reason rising yields are bullish for the stock market is very simple: it implies money is getting re-allocated out of bonds (yields rise) and most likely into equities.
And yet as you can see in the first chart above, the 10-year yield is not confirming this recent rally in the stock market, a potential red-flag.
Also note that small-cap stocks likewise have not been confirming this recent S&P 500 move:

Source: Bloomberg
The Russell 2000 Index has been trending lower since mid-March, making lower highs as the S&P 500 made a new high and is trending higher. It doesn’t always hold true, but more often than not one wants to see smaller-cap stocks confirm the move of larger-caps. An index like the S&P 500 is very top-heavy, reflecting the ups and downs of several mega-caps, whereas the Russell 2000 Index is a much flatter and more equal-weighted benchmark, offering a better representation of market breadth. Based on the chart above, the average stock is not doing as well as the S&P 500 would suggest — another potential red-flag.
Please share this article
at 12:03 AM No comments:

Chart of the Day - Excelon (EXC)

The Chart of the Day is Excelon (EXC) and was right at the top of the New High list when sorted for frequency.  It has both a Trend Spotter buy signal and 96% Technical buy signals.  In the last month the stock hit 18 new highs and was up 9.57 and that is coupled with a 5.63% dividend yield.