Falling bullish wedge where this week we made multi-month lows, essentially shaking out the weak hands. I think we could bounce up to the $540 level before rolling back over and starting a next leg down. It’s an upside down world where you have RIMM massively outperforming the markets and AAPL being a dog, but that’s the world we’re in right now and until we have a scary capitulation type sell off, I don’t think Apple’s going to make much headway to the upside.
Below is A monthly chart that points out where I see Apple heading to before this current sell off is over.

There's a wave of wealth sweeping rural areas across North America.
Sleepy, rundown towns are bustling with commerce and activity as the new-found money breathes life into the economy. Poor farmers and other landowners of once near-worthless properties are swimming in capital from this new way to exploit a natural resource.

This new method of extracting natural resources isn't really so new, though. It originated in the 1940s, but it wasn't until 1998 that it was perfected enough to be an economically viable, widespread technique.

If you haven't guessed it yet, I am talking about hydraulic fracking, or simply fracking for short.
Simply put, fracking is the process of extracting natural gas from shale rock formations deep underground. We have known about this resource for many years, but only recently has it become economically sensible to drill for natural gas.

Fracking involves forcing a high-pressure mixture of water, sand and lubricants sideways into small cracks in the shale, opening up a natural pipeline for the natural gas to escape into the vertical well to be captured and transported to the final user.

U.S. energy independence is no longer a dream
Fracking is definitely a positive step on the path to U.S. energy independence. It accounts for about one-third of all U.S. natural gas production. The Energy Information Agency estimates the United States has enough natural gas to last for the next 100 years, creating the potential for energy independence a powerful assumption. In fact, Andy Obermueller, chief strategist of Game-Changing Stocks, says the United States "will run on natural gas" in the next few decades. (He's actually putting the finishing touches on a special report on this topic right now, including the names and ticker symbols of the companies that are set to profit from this trend.)  (more)
at 12:06 AM No comments:

LGF Could Yield 16% in One Month

Value investors often look for stocks trading with a price-to-earnings (P/E) ratio below the market average or even in the single digits. The goal is to buy undervalued stocks with limited downside and above-average upside potential. They tend to ignore stocks with high P/E ratios.

High P/E ratios can be a caution flag for investors. In bubbles, P/E ratios often climb above 100 or even 1,000 for some stocks. Unless the company is growing its earnings very quickly, these P/E ratios are usually unsustainable and the stock price often collapses suddenly when investors realize the stock is overvalued (i.e. the dotcom crash).

Then there are times when a high P/E ratio is justified. A company could be in the middle of a turnaround with low earnings over the past 12 months but a promising future. Large accounting charges could lower reported earnings but operating income might be high. In these cases, we might see a triple-digit P/E ratio based on historic earnings but a very reasonable P/E when expected earnings are considered.

Entertainment production company Lions Gate Entertainment (NYSE: LGF) looks like a company with a P/E ratio that is temporarily high, but the stock is a buy based on the forecasts for the next few years.

For the full year that ends in March 2013, analysts expect EPS of $0.97 and $1.37 the year after that. Based on next year's expected EPS, the P/E ratio is only 13 and LGF looks like a value stock. Analysts expect EPS growth to average 26% a year in the next five years after an average decline of more than 19% a year in the past five years. If they are correct, LGF is a turnaround story.

LGF has been establishing itself as a leading entertainment content creator. The company's movie franchises include "The Hunger Games" and "Twilight." It owns television shows like "Mad Men" and "Anger Management." Altogether, LGF owns the rights to more than 13,000 movies and television shows and is developing additional content all the time. There will be a new "Hunger Games" movie scheduled for release in 2013, and the big hits will likely keep coming.

This content leads to revenue, more than $2.1 billion in the past 12 months, and should deliver earnings. Based on the current price and value, LGF is a buy, but traders wanting to buy at a discount can use a put selling strategy that generates income while waiting for a pullback.
Put options should only be sold on a stock that you would buy, and LGF appears to be a great long-term buy. Selling a put could allow you to buy the stock at a discount. The February $18 put is selling at about $0.58, or $58 per contract. If LGF is trading below $18 when the options expire, traders who sold puts will have to buy the stock at $18, making the potential cost basis $17.42 (the strike price of the put minus the option premium received).

If LGF is above $18 when the option expires, the profit in the trade will equal the premium received when selling the put. Margin of about $360 (20% of the strike price x 100) will be needed to sell the put because each contract will be for 100 shares of LGF. If the put expires worthless, the potential one-month profit on this trade would be 16% ($58/$360 x 100), or well over 100% a year if we could find a trade like this once a month.

Traders could also consider buying part of the position they'd like to have in LGF now and selling puts to generate income while waiting for a pullback.


The 16.6% potential profit in one month (based on current option prices) assumes the put expires worthless. If it does not, traders will own LGF at about 12.7 times next year's estimated earnings.

Oil Guru Destroys All Of The Hype About America's Energy Boom 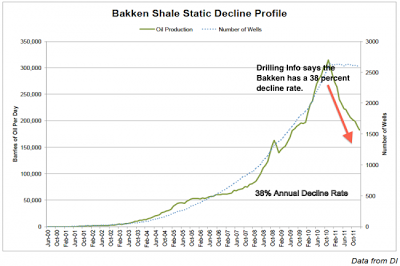 Not everyone believes the U.S. is capable of becoming energy independent thanks to its shale oil and gas reserves, as the International Energy Association suggested recently.
The math just doesn't work out, they say — America consumes too much.
But some are even more skeptical than that.
Arthur Berman, an oil analyst with Labyrinth Consulting Services, says the promise of America's shale reserves have been vastly overstated.
His main argument: shale is too expensive to drill, and shale wells usually don't last longer than a couple of years.
Last year, he laid out his case at a gathering of the Association for the Study of Peak Oil and Gas in Austin Texas.
With his permission, we've reproduced it here.  (more)

Chart of the Day - Equifax (EFX)

The "Chart of the Day" is Equifax (EFX), which showed up on Thursday's "All-Time High" list. Equifax posted an all-time Thursday at $57.24 and closed up +0.53%. TrendSpotter has been long since Jan 2 at $54.74. In recent news on the stock, Equifax's latest National Consumer Credit Trends Report released on Thursday, showed the amount of new credit card limits opened in the first three quarters of 2012 hit $675 billion, up from just $523 billion during the same period in 2010 as consumer credit cards continue their recovery with new credit originations returning to levels last seen three years ago. Equifax officials also noted that new auto loans hit a five-year high in September, mirroring the improvement economists have seen in unsecured borrowing. Equifax, with a market cap of $6.824 billion, is one of the leaders in facilitating and securing commerce by bringing buyers and sellers together world-wide through information, transaction processing and Internet businesses. Global operations include consumer and commercial credit information services, credit card marketing and processing services, check guarantee and authorization, software, modeling, database management, marketing solutions, analytics, direct to consumer services, and Internet identity verification and digital certificate services.