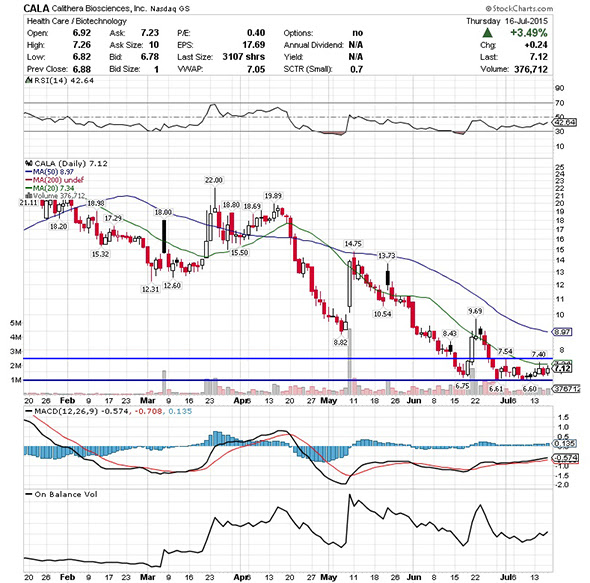 One clinical-stage biopharmaceutical player that's starting to move within range of triggering a near-term breakout trade is Calithera Biosciences (CALA), which focuses on discovering and developing small molecule drugs directed against tumor metabolism and tumor immunology targets for the treatment of cancer in the U.S. This stock has been slammed lower by the sellers over the last six months, with shares down huge by 61.9%.
If you take a look at the chart for Calithera Biosciences, you'll see that this stock has been downtrending badly for the last four months and change, with shares falling sharply lower from its high of $22 to its recent low of $6.60 a share. During that downtrend, this stock has been making mostly lower highs and lower lows, which is bearish technical price action. That said, shares of Calithera Biosciences have now started to stabilize over the last month, with shares moving between $6.60 on the downside and $7.54 on the upside. This stock has started to spike higher off that $6.60 low and it's now beginning to move within range of triggering a near-term breakout trade above the upper-end of its recent sideways trending chart pattern.  (more)
at 12:03 AM No comments:

A clutch of recent well-known initial public offerings have enjoyed prolific starts to their stock market careers. But short sellers are not so convinced the party will last.
Out of the U.S. IPOs over $100 million this year, Shake Shack Inc.SHAK +7.12%, Etsy Inc.ETSY +30.60% and Fitbit Inc.FIT -1.28% are among the top 15 most expensive to short, a good proxy for demand by investors, according to data from Markit.
The share price of Shake Shack, the U.S. burger chain that listed in early January, soared 119% on its first day of trading. The maker of the ShackMeister Dog became an early target of short sellers. However its share price remained strong into May and short sellers backed off a little.
Now they are back. Since mid-May, Shake Shack’s stock has slumped 45%, however it is still up 23% from its listing price. At present, 3.6% of its shares are on loan.
By comparison, the average stock out on loan in the S&P 500 (of which Shake Shack is not a component) is 2.5%, Markit says.
Of the major U.S. IPOs in 2015 Shake Shake is the most expensive firm to short sell, according to a Markit report. At present, short sellers are paying an annualized fee of 105% of the amount borrowed in order to short the stock, it says. 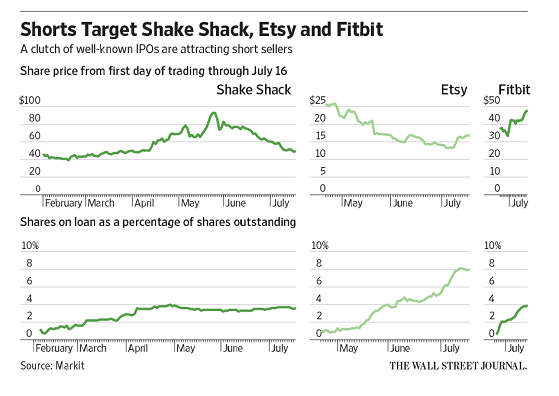 Etsy, the Brooklyn, N.Y.-based online marketplace for handmade and vintage goods that listed in early April, has been a steady target for short sellers. While the IPO soared 88% after a day of trading, it has since fallen 44% and is flirting around its offer price of $16. In the days after the IPO, only 1% of shares were on loan. This has steadily risen to 8%, according to Markit.
Gil Luria, an analyst at Wedbush Securities LLC, currently has a “sell” recommendation on Etsy. He thinks that Etsy is overpriced, and that revenue and the margins will come down in part driven by competition with Amazon Handmade, a rival service.
Another IPO that popped was wearable technology brand Fitbit. Listing in June 17, the company rose 48% over its first day trading, and 80% over its first week. It is currently up 139% from its offer price.
Analysts like the stock. Stifel Nicolaus, SunTrust Robinson Humphrey and Deutsche Bank AG have all nailed on “buy” ratings on the San Francisco-based company. However, shares on loan have risen to 3.7%, up from 2% in the days after listing.
Jim Duffy, an analyst at Stifel, has a “buy” recommendation on Fitbit. However, he says that part of the reason for the increase in short-selling interest could be that share prices have risen too high due to the short supply of growth venture companies and tech companies coming to market.
Etsy and Shake Shack declined to comment. Fitbit did not reply for comment.
at 12:03 AM No comments:

Gold Stocks To Continue the Plummet? 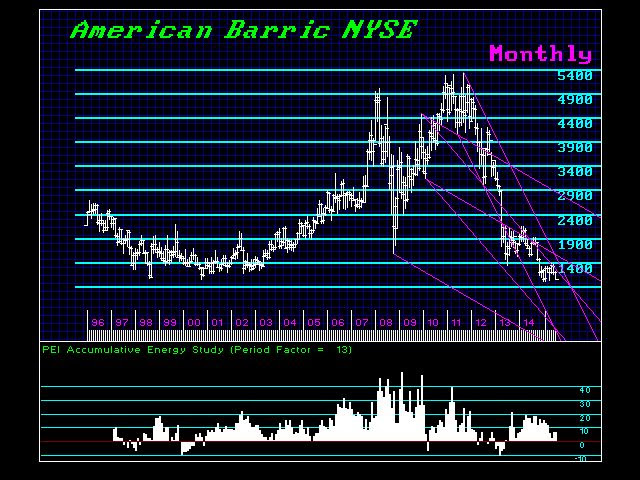 As long as there are people who still believe that the gold market is uniquely manipulated rather than simply in sync with the world economy, then the sad truth remains that we have not yet seen the bottom of the slide in gold prices just yet. Gold’s weakness led to a brutal sell-off among the world’s top gold miners and our Energy Models warn we are STILL not yet in an oversold position.
On Friday, more than 22 million shares of Barrick changed hands as the price plummeted some 5% to the lowest seen since 1990. Gold has no friends left, only believers as the price collapsed to the lowest level since April 2010 after the Fed said the world’s largest economy favors a rate hike counter-trend to Europe before year-end which has strengthened the dollar. This was augmented by China announcing it has diversified its foreign reserves placing only 1.6% in gold – a number that took the wind out of the gold conspiracy that China would back its currency with gold.
The gold market has turned increasingly bearish with the once large gold futures investors such as hedge funds slashing long positions. The holding of such funds has collapsed falling below 1 million ounces reaching new nine year lows. As European austerity becomes widely seen as just insanity, the big money is starting to see the writing on the wall – buy dollars.
The sell-off in gold was led by Barrick Gold Corp (NYSE:ABX, TSE:ABX), which is the world’s leading producer as its shares fell 5% to the lowest in USD terms since 1990. Barrick’s market value is now down 32% over the last three months alone bringing its market-cap to just under $14 billion in New York down from $64 billion at its peak in 2011. Barrick’s gold production is expected to fall further as it faces an oppressive debt-load of more than $13 billion – an amount equal now to nearly the total value of shares. This warns that a rate hike may see the value of Barric collapse even further.
Denver-based Newmont mines is actually the only gold company that forms part of the S&P500 index and is the second largest producer fell just under 3% on Friday. ADRs of AngloGold Ashanti (NYSE:AU), the world’s third largest gold producer in terms of output fell 5.8% for a market value of $3.1 billion on the NYSE.