Corning's Winning App for the iPad 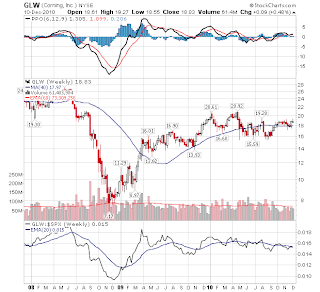 Corning shares have been almost as flat as its TV screens over the last few years.

Keeping Corning's share price (ticker: GLW) near last Thursday's 19 since late 2005 have been a variety of investor worries. The high-tech glass maker had to turn itself into a producer of liquid-crystal displays, or LCDs, for TVs once its fiberoptic business collapsed. But wasn't any venture tied to TV sales bound to be cyclical, with volatile profitability? That seemed to be true recently, as cash-strapped couch potatoes were less willing to get up and shell out hundreds of dollars for more dazzling video hardware.

The newest worries are "valid but overstated," says Nikos Theodosopoulos, an analyst with UBS. There's no doubt that Corning depends on its LCD business, which now kicks in 45% of estimated 2010 operating revenues and all of its profit; its market share is 55%. Still feeling the effects of recession, LCD inventories recently rose to 17 weeks, about three weeks longer than usual. And Corning's earnings growth has flattened.

But charting Corning's course based solely on month-to-month flat-screen TV sales misses the big picture, says the UBS analyst, who thinks the stock could rise to 25 in 2011. First, the LCD TV business is gradually loosening up. Black Friday sales and other discounts have brought TV prices down 20%-30%, helping cut LCD inventories a bit, to 16½ weeks. It's expected to gradually decline from there. More important, the economics of the LCD TV business differ from the old days: ultra-thin TVs will show up in more rooms in middle-class homes, and replacement cycles will significantly shorten from the old nine- or 10-year benchmark. Consumers will buy more often to get better picture quality, reduce power requirements and enable more sophisticated videogames. The LCD already has also found new applications: the revolving, framed picture gallery of grandchildren is one example. And LCD TVs haven't caught on in China and India the way cellphones and computers already have, so there's still room for growth. (more)
at 12:22 AM No comments: Links to this post

OPEC left its crude-oil production ceiling intact, despite recent signs that a recovering world economy might pressure the group to open its spigots next year.

The Organization of Petroleum Exporting Countries kept its targeted oil output rate at 24.85 million barrels a day at a meeting Saturday. The group, which disclosed that its next meeting would be in June in Vienna, has held its quotas steady at this level since late 2008, when they were scaled back by 15% in the middle of the global recession. Despite their stated target, OPEC actually produces 29 million barrels of oil a day, about a third of the world's output.

There is "no change," said OPEC President Wilson Pastor, who is also Ecuador's oil minister.

Oil prices in the past week flirted with $90 a barrel after rising 23% since late August. OPEC's wait-and-see approach sets the stage for heightened fears that high oil prices could undermine a fragile economic recovery in developed economies.

For now, however, there is no reason to panic, the world's top oil ministers say, despite crude's recent climb above the trading band of $70-$80 a barrel that Saudi Arabia, the world's No. 1 crude-oil exporter, advocates.

"Why do you want to disturb the market?" said Saudi Arabia's oil minister, Ali Naimi. "The market is in balance. Everybody is happy." (more) 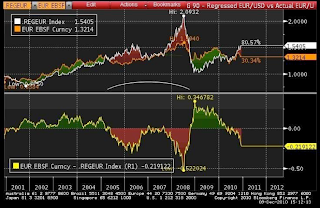 The EUR/USD Remains a Buy on Dips

Lately we have pointed to a number of issues regarding the EUR and the USD. Over the past few days, we have worked on a predictor of the EUR/USD price based off a number of inputs; namely the European/US 2-Year Basis Swap (a measure of US vs. European interbank credit quality); the interest rate differential between Europe and the US in the 2-Year swap rates; the level of the CRB Index (a broad basket of commodities); and lastly the price of Gold as a function of the USD Index. Our analysis supports our view that the EUR is undervalued relative to the USD, currently indicating an undervaluation of about 16 percent. Much of this undervaluation comes as a consequence of the dollar's “flight to safety” status, a status we have lately questioned. The latest move lower in the EUR/USD came as the flight to safety trade was added to on fears over imminent Euro collapse brought on by news out of Ireland and Portugal. See Chart 1.

Our reasons for why we like the EUR/USD are numerous. First, we see continued demand from Asian Central Banks to buy EUR in order to diversify out of their overly long USD foreign exchange reserves. Secondly, we are growing more concerned over state and local weakness in the municipal sector. Be it in California, New York or Illinois, the daily headlines concerning fiscal and pension deficits are increasingly alarming, especially given the only way out is through bail-outs or economic growth, and given the latest data on housing and employment we do not see the latter as the near-term outcome. Recent squabbling in the Congress over the inclusion of the Build America Bonds program in the latest tax deal is sweeping the only support for the municipal sector from under its feet. (more)
at 12:16 AM No comments: Links to this post 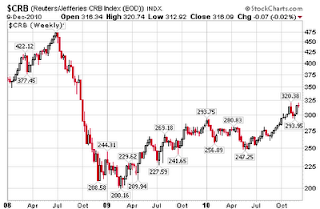 The Commodity Futures Trading Commission says futures positions in commodities are 17% higher now than when the commodity index peaked in June 2008. The Wall Street Journal picks up the story in Investors Pile Into CommoditiesInvestors are holding their biggest positions on record in the commodities markets as prices surge and debate intensifies among U.S. regulators about whether to limit the amount that any one trader can bet in markets for energy, metals and agricultural products.

Hedge funds, pension funds and mutual funds dramatically ramped up their holdings in everything from oil and natural gas to silver, corn and wheat this year. In many cases, the number of contracts held for individual commodities now far exceeds the amount outstanding in mid-2008, the last time commodity markets were soaring to records and debate raged about whether excessive speculation was driving up prices.

Contracts held by investors have risen 12% this year through October and are 17% higher than June 2008, according to data from the Commodity Futures Trading Commission, the market regulator. (more) 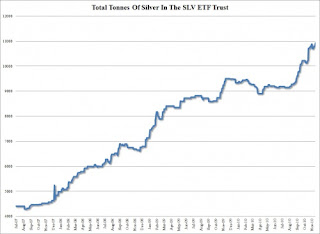 After we reported a week ago that JPMorgan was trying to corner the copper market, many noted this was not surprising, considering the bank's comparable approach in manipulating various other precious metal markets. Naturally, we extrapolated that the main reason why the CFTC continues to refuse to delay implementation of position limits is precisely due to the JP Morgan's need to control commodity pricing precisely due to such manipulative trading practices: "As for the CFTC, we now know why they are so intent on delaying the size limit discussion: after all, any regulation will be forward looking - better let JPM accumulate all commodities it can and distribute these via hidden channels to affiliated subs before the ever so busy Gary Gensler corrupt cronies decide to raise their finger on what is increasingly an ever more blatant market manipulation scheme. At least in this case, JPM will push the price higher unlike what it is doing courtesy of its gold and silver manipulation. However, the PM market (especially Asian accounts) will soon make sure Blythe Masters is looking for a job within 3 months as we predicted a few weeks ago." The only problem with this story is that so far, is that unlike copper, JP Morgan's now legendary paper short in the silver market, long taken for granted by the "less than in mainstream" community, has been persistently ignored by the broader media due to the a lack of concrete evidence. Hopefully that will now change: courtesy of a speech delivered by none other than the CFTC commissioner Bart Chilton, who continues to expose the CFTC and the banker cartel's illegal market manipulation practices, we now have proof that "one trader held over 40 percent of the silver market." As this trader is either JP Morgan directly, or various Blythe Masters proxies, we can only hope that finally the broader outcry against JPM's ongoing attempt to suppress precious metal prices (insert Mike Krieger/Max Keiser "Crush JP Morgan" campaign here) will force the bank to finally unwind its shorts. And if not, perhaps the market speculators will do it for them: as of Friday, the SLV ETF held an absolute record 10,941 tonnes of silver, an increase of 163 tonnes for the week. (more)
at 12:13 AM No comments: Links to this post

Jim Chanos: "Adam Smith will get his Revenge on China's Real Estate Bubble"

China is building US-priced condos where the average income is $3500 per person.

Margins on Chinese companies are razor thin. If China hikes rates substantially most companies in China will lose money. Chanos thinks they already are. "Every company we have looked at has accounting issues. The lower you get in the story the more interesting it becomes."

If China implodes, Chanos thinks the US will fare relatively well on the basis "Europe exports more to China than the US, and that South America is dependent on China as are parts of Asia."

When asked about the sustainability of what China is doing, Chanos commented that a lot of what the state is doing is "misdirected investment" in order to keep nominal growth. At the end of the day, that will come back to haunt them.

Chanos mentioned Adam Smith a couple of times in the interview. Adam Smith is author of The Wealth of Nations.

"Adam Smith will get his revenge in China's real estate market. It is very difficult to manage these kinds of bubbles."
at 12:11 AM No comments: Links to this post 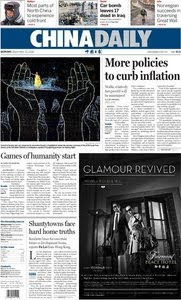 Are Housing Stocks Ready to Fly? The XHB homebuilders ETF is showing signs of life 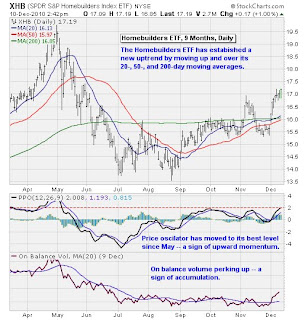 The housing market just can’t catch a break. The expiration of the government’s homebuyer tax credit resulted in a double-dip of sales activity over the summer. And now, prices are sliding again.

To make matters worse, the recent selloff to hit bonds – which was the subject of my last post — is pushing mortgage rates higher. The 30-year fixed mortgage rate has climbed from a record-low of 4.17% just a few weeks ago to more than 4.6% now. That’s hitting housing affordability at just about the worst possible time as the “shadow” inventory of foreclosed homes starts to hit the market as the foreclosure moratorium related to shoddy bank paperwork comes to an end.

And by extension, the same goes for housing stocks. While the overall stock market is pushing to new multi-year highs, the Homebuilders Index ETF (NYSE: XHB) has been stuck in purgatory since falling from its April highs and is down nearly -14% over the period. The same goes for its major constituents, including Toll Brothers (NYSE: TOL), PulteGroup (NYSE: PHM), KB Home (NYSE: KBH).

But now, there is some evidence that buyers are cautious returning to the sector. (more)