How to Survive The Next Financial Collapse ~ James Wesley Rawles

Alex is joined via Skype by Former U.S. Army Intelligence officer and survivalist author James Wesley Rawles to discuss the imminent danger of world-wide economic collapse and how we can prepare for the situation
Please share this article
at 12:07 AM No comments: Links to this post

Berry Petroleum Company, an independent energy company, engages in the acquisition, exploitation, exploration, production, and development of oil and natural gas in the continental United States. As of December 31, 2012, it had interests in 2,584 net productive oil wells and 271 net productive natural gas wells; and proved undeveloped reserves of 124.9 million barrels of oil equivalent in California, Texas, Utah, and Colorado. The company primarily sells its crude oil and gas to marketing companies or refiners. It is also involved in the generation and sale of electricity. Berry Petroleum Company was founded in 1909 and is headquartered in Denver, Colorado.
To review Berry's stock, please take a look at the 1-year chart of BRY (Berry Petroleum Company) below with my added notations: 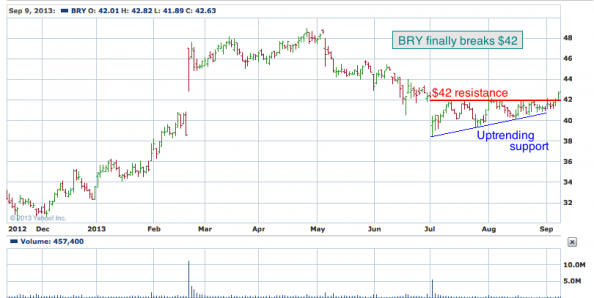 BRY had consistently hit resistance at $42 (red) over the last (2) months. In addition, the stock formed a clear trendline of support (blue) starting back in July. These two levels combined had BRY stuck within a common chart pattern known as an ascending triangle. At some point, the stock had to break through one of those two levels, and as you can see, it was the $42 resistance that finally broke.
The Tale of the Tape: BRY broke the resistance of its ascending triangle. A long trade could be made on a pull back to $42. A break back below the $42 level would set up a possible short trade and negate the forecast for a move higher.
Please share this article
at 12:05 AM No comments: Links to this post 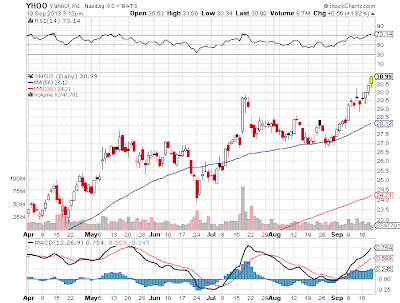 For over a year now former Google all-star Marissa Mayer has been at the helm of Yahoo! Inc. (Nasdaq: YHOO).

So far Wall Street has been enamored with Mayer as a businesswoman and a personality. She has outlined a much clearer vision for Yahoo than her predecessors.

Investors in Yahoo stock are happy – the share price is up more than 80% since Chief Executive Officer Mayer took charge.  (more)

Baron Rothschild, a member of the powerful 18th century banking dynasty, is credited with coining the phrase, "Buy when there's blood in the streets." Rothschild recognized that the smartest purchases are often when things appear so dire that nearly all hope has been lost.

This idea is at the heart of contrarian investing. A contrarian is an investor who goes against the herd. They often buy beaten-down stocks in hopes that a positive catalyst will soon drive the price higher. They know that the most value and potential profits come from shares that have been beaten down.
Obviously, being a contrarian does not mean buying stocks that are plunging due to solid
fundamental reasons with little hope of recovering. Successful contrarians only invest in beaten-down companies that careful research indicates are about to turn around.  (more)

Green Mountain Coffee Roasters (NASDAQ: GMCR) is a favorite among traders and the financial media, not to mention among java lovers in the ever-growing coffee culture in the United States. The stock's volatile swings during the past few years were enough to satisfy even the most voracious appetite for volatility. In recent months, GMCR has settled into a consolidation phase, but now looks poised for a breakout.
Before looking at GMCR's chart, I'd like to note the dramatic slide in the price of coffee futures during the past two and a half years. After topping in May 2011, coffee futures have slipped more than 60% and continue to fall.

While there is no direct inverse correlation between the price of coffee futures and the stock of Green Mountain Coffee Roasters, it certainly would be difficult to make the case that lower input costs are hurting the company. So, from a fundamental point of view, as I walk through the charts below, keep in mind that lower input costs should be a positive for the stock. (more)
Please share this article
at 12:03 AM No comments: Links to this post