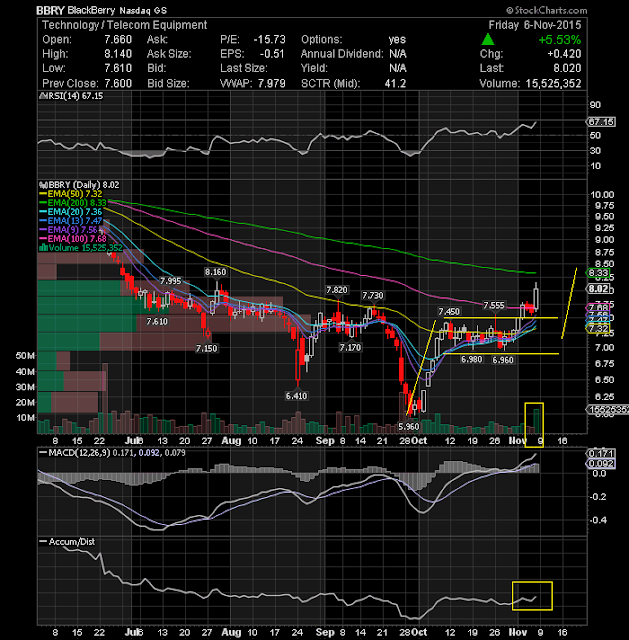 BlackBerry Ltd (NASDAQ:BBRY) Closed the week with a BANG and looks like it will continue to run up. After 4 weeks trading in a tigh range, patient investors were rewarded as the price finally broke out of the consolidation period. From a technical standpoint, the daily chart shows that the 200-day EMA stands at 8.33, providing a key dynamic resistance for the upcoming sessions, as an extension beyond this level, should lead to additional gains and a potential big short squeeze. In the same daily technical chart, indicators maintain their bullish tone above their mid-lines, which means that the rally is far from over.
at 12:03 AM No comments: Links to this post

Keurig Green Mountain, Inc. produces and sells specialty coffee, coffee makers, teas, and other beverages in the United States and Canada. It sources, produces, and sells coffee, hot cocoa, teas, and other beverages under various brands in K-Cup, Vue, Rivo, K-Carafe, and Bolt portion packs brands; and coffee in traditional packaging, including bags and fractional packs, as well as offers whole bean and ground coffee in bags, fractional packages, and cans. The company also offers other specialty beverages in portion packs, which include hot apple cider, hot and iced teas, iced coffees, iced fruit brews, hot cocoa, and other beverages for use with its Keurig hot brewing systems, as well as sells coffee-related equipment and accessories, gift assortments and hand-crafted items from coffee-source countries.
Take a look at the 1-year chart of Keurig (NASDAQ: GMCR) with the added notations: 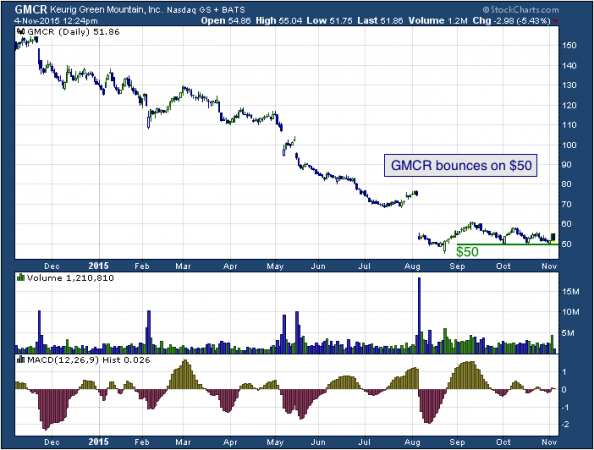 GMCR has been in a solid downtrend for the past year. However, the stock has been trading sideways on top of a $50 support (green) during the most recent two months. Now that the stock appears to be testing that support level again, traders should be able to expect some sort of bounce. However, if the $50 support were to break, lower prices should follow.

The Tale of the Tape: GMCR has a key level of support at $50. A trader could enter a long position at $50 with a stop placed under the level. If the stock were to break below the support a short position could be entered instead.
at 12:03 AM No comments: Links to this post

Ralph Acampora: Look for a Market Rally Through Year-End

Jim welcomes back legendary technician Ralph Acampora, Director of Tactical Investments at Altaira Wealth Management. Ralph advises buying the dips, as he sees a nice market run into the end of the year. Ralph notes we got the needed market washout in August and September, and it then turned up impressively in late September in the face of bad news from China. Ralph still believes we are in a secular bull market, with normal corrections and periods of sector rotation. He currently favors the financial sector, and offers some investment ideas within that sector. Also in this segment, Ryan Puplava has this week’s Market Wrap-up, and Robert Rapier covers the energy space.

Click Here to Listen to the Audio
Continue Reading at FinancialSense.com…