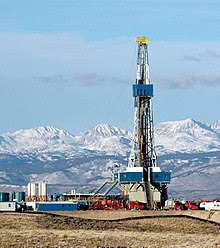 Finally, we were able to get Dr. Frackenstin on the show. He’s a 25 year veteran Petroleum Engineer. He’s drilled 10′s of thousands of wells, without a blow out. He does it safely and efficiently. He can regularly be found in the North Dakota tundra. He thinks that fracking has gotten a bad wrap and he’s not afraid to say so. In addition, he’s blowing the lid off the peak oil theory. Oil fields that were considered fully depleted 30-40 years ago have literally gotten a new lease on life, through horizontal drilling and other enhanced recovery techniques. Hopefully, this will mean that we won’t be on gas lines soon anytime soon.

Please bookmark us
at 11:31 AM No comments: Links to this post

With gold near $1,670 and silver close to $32, the Godfather of newsletter writers, Richard Russell, discussed a couple of global indexes, highlighted gold and the mining sector with some fascinating charts, and asks, what about Germany? Here is what Russell had to say: “Will Germany shock the world by pulling out of the eurozone? Germany’s stock index has been consolidating, but I don’t like the look of MACD. Germans are dreaming of getting back their beloved Deutsche mark — I think they’ve had enough of the euro.”
Continue Reading at KingWorldNews.com…


Please bookmark us
at 11:23 AM No comments: Links to this post

How To Analyze $SPX Wedges!

Here is the link for the Wednesday january 23rd Webinar.

I covered off all of the major wedges in the $SPX. I think this will help most people with what history has shown about major 2 year wedges and how you may want to trade around the prcie action relative to the wedge.

I received a lot of posts for people who saw the webinar and found it very enlightening.

Let me know what was valuable for you!

The opening range breakout strategy is one of the first day trading strategies explained in detail for individual traders. In 1990, Toby Crabel wrote a book called Day Trading With Short Term Price Patterns and Opening Range Breakout.
This book has been out of print for years and it is rumored that Crabel would not give permission for a second printing because he was profitably managing money with the strategies. Copies are occasionally available for prices starting at several hundred dollars on Internet auction sites.
The book describes very specific rules for trading several markets, rather than a general but practical overview like this article offers.

Traders using the opening range breakout strategy calculate the opening range, which is the difference between the highest price and the lowest price in the first few minutes of trading. Common time frames are the first 15 minutes or the first 30 minutes of the trading day, although longer or shorter periods can be used.If price moves significantly above or below that range, traders expect to see follow through and will place orders to enter trades near the high and low of the opening range.
How Traders Use It
An example of the opening range breakout strategy can be described with a few rules:
1. Calculate the opening range. For example, if the high is $102 and the low is $98 in the first 15 minutes of the trading day, the opening range would be equal to $4.
2. The size of the range is added to the high and a buy order is placed at that price. In this example, $4 is added to $102 and a buy order is placed at $106.
3. Subtracting the range from the low provides the short entry point. In this case the trader would enter an order to go short at $94, which is $4 below the low of the opening range at $98.
4. If prices fall back to the middle of the range, then the trader would close their position with a loss. In this example, a long trade entered at $106 would be closed at $100 and a short trade entered at $94 would be closed with a loss at $100.
5. All trades are closed at the end of the day.
There are many possible variants of these ideas. The time frame could be changed in step 1. A multiple of the range could be changed in steps 2 and 3. For example, aggressive traders might use a multiple less than 1 (like 0.5) to generate more trades while more conservative traders might use a larger multiple (like 2) to trade only the strongest trends. Stop-loss levels can be varied in step 4 and profit targets could be added as exits in step 5.
Why It Matters To Traders
The opening range breakout strategy has been widely used by traders to profit from intraday moves.
This is also an ideal trading system for day traders with full-time jobs. All of the required data is known shortly after the market opens, 15 minutes after the open in the example shown. Orders can quickly be calculated and entered with a broker so that traders can profit from intraday trends without having to monitor the market all day.

Cambridge House, Published on Jan 23, 2013
For years the Gold Anti Trust Action Committee has been on the front lines pushing for an audit of the Federal Reserve. Headway is being made and GATA is here to give an official update.
Featuring Chris Powell, Bill Murphy & Ed Steer.
http://www.gata.org/
Filmed January 20th, 2013

Find Bargain Stocks Like Buffett With These 4 Value Ratios

Putting his finger on this difference between price and value in stock investing is essentially what made Warren Buffett the third-richest person on Earth, according to Forbes. Today he's worth more than $44 billion.
What Buffett means is simply this: Every stock on the market trades for a certain price, but it's more important to know how much you're actually getting in return for paying that price. That's value.
To better explain, let's scale stocks down to lemonade stands. Say you want to make some money and you're deciding between buying one of two different lemonade stands to do it. Both stands are being sold by their owners for the same price -- $100.

Let's look at your two investment choices: If you invested $100 into the first stand, then you could earn $20 each year and make back your original investment in five years. But if you instead invested $100 into the second stand, then you could make back your money in one year and start earning profit after that. That's a 20% annual return versus a 100% annual return on investment. It's clear that the second lemonade stand is a much better value.  (more)

Lenic Rodriguez, CEO, Aurcana discusses why silver is gaining popularity among investors. He explains how that is helping his company’s business.
Please bookmark us

Eveillard: Wall Street Is A Den Of Thieves, I’m Not Selling Gold

kingworldnews.com / January 25, 2013
Today legendary value investor Jean-Marie Eveillard, who oversees $73 billion, told King World News, “I say to myself when I’m in a good mood, ‘Wall Street is nothing but a vast promotion machine.’  When I’m not in a good mood I tend to think, Wall Street may be, after all, a den of thieves.”  Eveillard also tore into Goldman Sachs for their bearish call on gold, and went on to emphatically state, “I’m not selling any of the gold I own.”

Here is what Eveillard had to say:  “What’s catching my eye is the Fed is printing enormous amounts of money.  Meanwhile the Bank of Japan, which up until recently had been quite reluctant to print money, Mr. Abe has now indicated without any ambiguity they will print very freely. ”
Jean-Marie Eveillard continues:

“To the extent that the central banks continue to print, and at some point the European Central Bank will print again, I think we have the conditions for the pure paper money system, which has been in place now for more than 40 years, to continue to fray at the edges.

So what I’m saying is that I have no idea where the price of gold will go over the short-term, but I think from a medium-to-long-term standpoint the conditions continue to be quite ripe for the price of gold to go up again.  Now I understand that Goldman Sachs has recently produced a paper which is negative towards the price of gold….
READ MORE

Over 1.4 million American borrowers pull out of negative equity in 2012.

doctorhousingbubble.com / By Dr. Housing Bubble / January 24, 2013
The big story of 2012 was the incredible decline in available housing inventory for sale.  This trend appears to be continuing and is adding a tremendous amount of pressure on the current market especially for those looking to buy.  Ironically, the increase of real estate values will also revive many home owners from their zombie slumber in negative equity.  Over 1.4 million borrowers came out of a negative equity position in 2012.  This is a large number given the limited amount of inventory on the market.  How many of these people will be looking to sell as their homes turn into positive territory?  The quest for inventory might come from a very familiar place with regular people selling their homes for a variety of reasons including moving to another place, cashing in, marriage, divorce, new job, or any other factors that cause people to sell.  In other words, a more normal housing market.  Will these former negative equity borrowers push inventory levels up?
The underwater nation
Even with 1.4 million borrowers exiting out of negative equity, we still have 10.7 million American underwater.  In many cases, some are severely underwater: 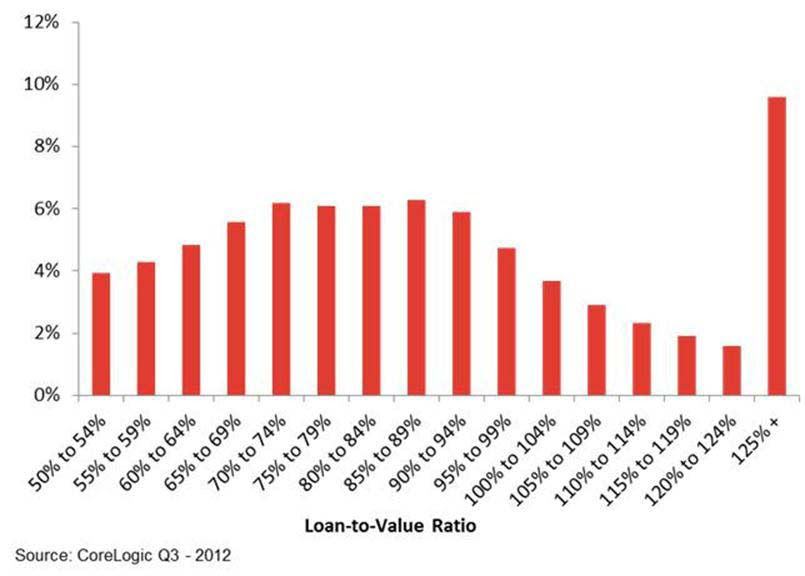 Nearly 10 percent of borrowers are still in deep trouble with loan-to-value ratios above 125 percent.  22 percent of properties with a mortgage are still underwater and this is a sizable amount.  The drastic drop in inventory is uncharacteristic but does make sense.  Banks are controlling the flow of distressed properties onto the market.  We currently have over 5 million homes in some sort of distress (foreclosure or with at least one missed payment).  This has been going on since the housing bubble popped.  The total completed foreclosure count is somewhere around 5 million.
READ MORE