The Bears are Back: Gas Prices Explained

Will 2012 begin the unclogging of 6,000,000 distressed properties? Over 40 percent of the 2 million active foreclosures stand with no payment in over

The housing market is clogged like backed up plumbing in an old building. The shadow inventory is still very present even though visible inventory declined last year. It seems like we are diving back into the rabbit hole where information is disguised and bad news is spun as being good. Take for example the number of homes actively in foreclosure. Early in 2009 we had roughly 2,000,000 homes actively in foreclosure. The number today? 2,000,000. The Catch 22 of the giant bank bailouts and financial shell game was the bet (hope) that housing prices would have gone back up after five years especially with trillions of dollars funneled into the banking sector. I mean what can go wrong when you trust banks with housing right? The reality is sinking in that home prices are going nowhere but down unless household incomes rise and that is why we saw foreclosure starts surge last month. The shadow inventory is coming online and that means lower prices. Don’t think this is a shell game? Over 40 percent of the 2,000,000 foreclosures have not had a payment in two years. This isn’t even factoring in the 4 million delinquent loans that are working their way into the REO side of the equation.

The current state of shadow inventory

It is always helpful to see where things stand today in regards to the distressed inventory pipeline: 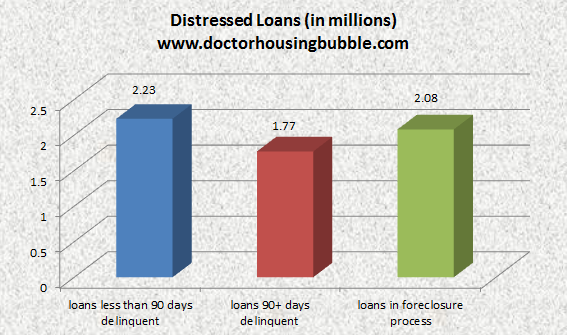 Over 2 million loans are actively foreclosed (ether with a notice of default filed, scheduled for auction, or flat out owned by the bank as REOs). Another 4 million are delinquent bringing the total distressed inventory pipeline to over 6 million. This number sounds familiar because it really hasn’t moved in well over a year (like pretending the toilet magically unplugged itself if you simply choose not to flush it). (more)

In what could prove to be the most critical unintended consequence of the ECB's LTRO program, we note that as of last Friday the ECB has started to make very sizable margin calls on its credit-extensions to counterparties. While the hope was for any and every piece of lowly collateral to be lodged with the ECB in return for freshly printed money to spend on local government debt, perhaps the expectation of a truly virtuous circle of liquidity lifting all boats forever is crashing on the shores of reality. This 'Deposits Related to Margin Calls' line item on the ECB's balance sheet will likely now become the most-watched 'indicator' of stress as we note the dramatic acceleration from an average well under EUR200 million to well over EUR17 billion since the LTRO began. The rapid deterioration in collateral asset quality is extremely worrisome (GGBs? European financial sub debt? Papandreou's Kebab Shop unsecured 2nd lien notes?) as it forces the banks who took the collateralized loans to come up with more 'precious' cash or assets (unwind existing profitable trades such as sovereign carry, delever further by selling assets, or subordinate more of the capital structure via pledging more assets - to cover these collateral shortfalls) or pay-down the loan in part. This could very quickly become a self-fulfilling vicious circle - especially given the leverage in both the ECB and the already-insolvent banks that took LTRO loans that now back the main Italian, Spanish, and Portuguese sovereign bond markets.

This huge increase in margin calls can only further exacerbate the stigma attached to LTRO-facing banks - and as we noted this morning (somewhat presciently) both the LTRO-Stigma-trade, that we created, and the potential for MtM losses on the carry-trades that LTRO 'cash' was put to work in could indeed start a vicious circle in European financials, just as everyone thought it was safe to dip a toe back in the risk pool. (more)

Irish journalist Vincent Browne confronts the ECB's (European Central Bank) Klaus Masuch demanding to know where the money is going.The Banker doesn't know where the money﻿ goes.He only knows what the higher ups want him to know so in fact he can't awnser, Mr.Brownes question. "Confidence in the banking system" !? Making people pay billions to incompetent banks will give them confidence in the banking system. All of it is nonsense. This man is right. We are being talked to like children who can't understand while they demand that we pay their tabs. It's open theft. It is﻿ how really low people manipulate children. This kind of manipulation is what these people are skilled in and it is exactly why they were sent to do this job.
at 12:05 AM No comments:

Is VIX Suggesting Market Collapse Around the Corner?

It took the mar­ket sev­eral weeks to fool the last momos going long this mar­ket. We are see­ing the biggest daily drop this year in todays ses­sion. Over the past weeks peo­ple have been buy­ing equi­ties, sell­ing vol, and all agree­ing “volatil­ity is dead”.

Well, real­ity is back, vol is spik­ing, and the con­fi­dent investors is scratch­ing his head. Below is a chart of SPX and the VIX. Note what has hap­pened when mar­ket crosses these “mag­i­cal” lev­els. Last time VIX traded at these lev­els (for more than a day or two), SPX was at 1300. The other times VIX crossed these lev­els in a sim­i­lar fash­ion, mar­kets col­lapsed. What’s next?

Maybe not the big col­lapse, but this Crash of 1929 video is def­i­nitely worth review­ing, just in case.... With many global investors still concerned about the price of gold and silver, today King World News interviewed the “London Trader” to get his take on these markets. Here is what the source had to say: “Yesterday when we dropped through $1,700, you would not believe the amount of physical tonnage orders that filled. US centric traders tend to concentrate on the COMEX, but the real market is made in London.”

To say the least, the last four years have been a wild and volatile ride for the Euro currency. As the implications rendered from Eurozone debt continue to evolve, economists the world over debate the Euro's fate daily. Below is a chart of the Euro, which has a potential head-and-shoulders-top formation in place. This is a potentially bearish formation that I will now explain.

Look to the right side of the Euro daily bar chart below. Notice the three red, short horizontal lines. Then picture a man's back facing you. The red line furthest left would represent his left shoulder, while the middle red line would be his head; and the line furthest right would be his right shoulder. This is a bearish chart formation, since attempts to retrace to the head's high fail during the formation of the right shoulder. Theoretically, market participants eventually realize that the upward trend has exhausted itself, and the trend reverses.

The projection measured from this head-and-shoulders neck-line, if completed, would take the Euro down to the 112.00 area minimally. As always, I like to mention that no analysis is fool-proof or guaranteed. That's why I always refer to chart patterns as potential ones. A pattern is confirmed only after a chart projection has been achieved. This pattern would be negated if the Euro rallied back up through 136.00 with momentum. It sits at 131.43 as of 11:15 AM CST today.

IMPLICATIONS – Similarly to the implications mentioned in my chart commentary on 30-year T-Bond yields of March 2, the Euro has in place a chart pattern that calls for a projection which, if fulfilled, would probably be problematic for global equities. The Euro has been part of the 'risk-on' trade and has tended to do well during times of less global economic duress. On the other hand, it has performed poorly during periods of more concern. A trip down to 112.00 (last seen in 2003) would probably be accompanied by a risk-off "flight-to-quality." A 112.00 Euro/USD would obviously be a new crisis low for the Euro, and would be a 62% Fibonacci retracement of the Euro's major rally of 2000-2008.

The "Chart of the Day" is Dick's Sporting Goods (DKS), which showed up on Tuesday's Barchart "All Time High" list. Dick's on Tuesday posted a new all-time high of $47.42 and closed +2.90%. TrendSpotter has been Long since Jan 13 at $40.18. Dick's on Tuesday rallied on earnings news and its comment that it has the potential to open 400 more stores over the next several years. UBS on March 2 reiterated its Buy rating on Dick's and raised its target to $52 from $45. Dick's Sporting Goods, with a market cap of $5 billion, is a leading full-line sporting goods retailer in the United States.

Bob Chapman : The stock markets are about to crash

Bob Chapman - National Intel Report - March 6, 2012 - Greece, the best and safest investments are gold and silver default will bring Europe down , the stock markets are about to crash , inflation will continue to rise
at 12:03 AM No comments: