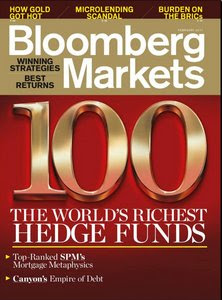 read more here
at 12:21 AM No comments: Links to this post

Thanks to its awesome autumn rally, silver has become something of a rock star in the commodities world. Investors and speculators alike are enthralled with this white metal. But with it just hitting new 30-year highs, many on Wall Street suspect silver is stretching to bull-ending extremes. However once silver’s modern history is recast into real inflation-adjusted terms, this metal’s secular bull is still looking young.

For any long-term price comparisons, over a decade, adjusting for inflation is absolutely essential. The US Federal Reserve is constantly creating new fiat dollars out of thin air, cheapening all the other ones already in existence. When the money supply grows faster than the pool of goods, services, and investments on which to spend it, nominal prices rise. Relatively more dollars compete for relatively fewer things to buy, driving up prices.

You may be old enough to remember 1980, the end of silver’s last secular bull. Back when silver hit its all-time nominal (not inflation-adjusted) high of $48 per ounce, the US median household income was under $18k. Across the nation, new houses averaged just $76k while new cars ran less than $6k! A candy bar went for a quarter. Obviously a dollar back then went a lot farther than a dollar today. The Fed’s inflation since has relentlessly eroded each dollar’s real (inflation-adjusted) purchasing power.

So comparing $30 silver today to $48 silver in January 1980 is grossly misleading, it isn’t even close to being an apples-to-apples comparison. We have to adjust past prices for inflation in order to see them rendered in today’s dollars, which are the only dollars we really understand. The purest way to do this is to adjust past prices for growth in the Fed’s money supply, minus real economic growth. If money ramps by 8% and the US economy grows by 3% in any given year, then actual inflation is probably close to 5%. (more)

Western European government bonds are riskier than emerging-market debt for the first time as investors brace for $1.1 trillion of borrowing from euro-region nations this year.

The Markit iTraxx SovX Western Europe Index of credit- default swaps insuring the debt of 15 countries, including Germany, Greece and Portugal, climbed to 7 basis points more than the Markit iTraxx SovX CEEMEA Index linked to Romania, Turkey and Ukraine, according to data provider CMA. The developed nations were 160 basis points more creditworthy than their emerging-market peers as recently as February.

Portugal’s borrowing costs surged at a six-month bill sale this week, the first of Europe’s high-deficit nations to test investor demand in 2011 after the threat of default forced Greece and Ireland to seek bailouts last year. Spain and Italy together need to raise 317 billion euros ($413 billion) this year, according to BNP Paribas SA.

“Concerns about the periphery are dragging down western Europe,” said Harpreet Parhar, a strategist at Credit Agricole SA in London. “Emerging markets have solid growth stories and are not directly weighed down by peripheral issues.” (more)

A Brief History of Silver Manipulation

The silver fairy tale of the brothers Hunt

In the early 80’s the attempt of the Brothers Hunt, Nelson Bunker and William Herbert Hunt, to fully clamp down the silver market was one of the most spectacular but at the same time also one of the most unsuccessful financials plans within the then fair world. Despite that the brothers failed in their attempt to clamp the silver market, they have succeeded to make a outright mess of the precious metals market and lose one of the largest fortunes in the world in no time.

The expansion of the Hunt Empire

Nelson Bunker Hunt and William Herbert Hunt were born in one of the richest American families. Their father Haroldson Lafayette (also known as H.L. or Arizona Slim), had acquired a fortune during the 20s and the 30s in the Texan oil industry. By investing these oil revenues in successful companies, the Hunt family grew into one of the most prosperous families from all over America. When H.L. died in 1974, he left his next of kin therefore an immense capital. H.L. Hunt had 14 children at three different women, 6 with his legal wife, 4 from a bigamist marriage and another 4 at one of his mistresses. Bunker and Herbert were two full-fledged brothers, namely the second and the third son of H.L. Hunt and his first wife Lyda Bunker Hunt. When Bunker and Herbert just started to get a grip on the silver market the 70’s, their capital was estimated around 13 billion dollars. H.I. Hunt’s logical successor and next boss of the Hunt Empire was originally his eldest son Hassie. However, his plans were thwarted when the same Hassie during his twenties had to do to with psychiatric problems and underwent various treatments without success. H.L. therefore had no choice but to name his second son as successor to lead. In the beginning, however, Bunker showed not the gift of his father in order to locate new oil fields. Bunker lost in his early years millions of dollars by error self-rated and fruitless attempts to find new oil fields for the Hunt Empire Carlo. But once Bunker learned how to do it after a few year, he did it immediately with verve and with style. He found an immense Libyan oil field, Sarir Field, which turned out to be one of the largest oil fields in the world. The discovery of this oil field swept into a seesaw the losses which he had piled up in the previous years from the table. In the early 70’s, he and his brother Herbert took over the Empire forever on. (more)
at 12:17 AM No comments: Links to this post 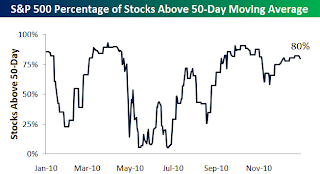 The chart shows the percentage of stocks above their 50-day moving averages in the S&P 500 and its ten sectors. As shown, the level remains at 80% for the entire S&P 500, and it hasn't been able to reach the highs seen during prior rallies over the past year.

Three sectors have more than 90% of stocks above their 50-days, and it may be surprising to see that the Financial sector is one of them at 93%. The Industrial sector has the highest reading at 98%, while Energy is at 95%. The two Consumer sectors and Utilities have the weakest breadth readings at the moment. Consumer Discretionary is at 66%, Consumer Staples is at 59%, and Utilities is at 47%. (more)
at 12:14 AM No comments: Links to this post

This week we examine the US PMI results, US nonfarm payrolls, US equity and bond mutual fund flows trends, EU inflation and growth stats, and a review of monetary policy developments over the past week.

1. US PMI
The US had two good results, the manufacturing PMI increased to 57 from 56.6 (driven by strong new orders, production, and prices), and the non-manufacturing shot up to 57.1 from 55 (driven by new orders, business activity, and prices). The new orders part of the results was a cracker, with both sub-indices above 60), showing there may be a bit of momentum to come. Another interesting aspect of the releases was the increase in the price indexes: inflation? And the other notable was a small decline in both of the indexes' employment sub-indexes, which lines up with the good but not great NFP figure below. 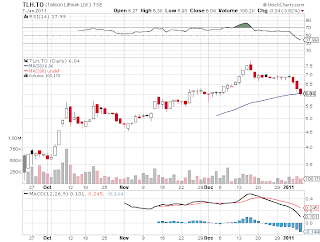 The Energy Report: Jon, tell us why lithium is generating a lot of excitement right now.

Jon Hykawy: It's a case of the general public starting to understand what the electric car might be able to do. As electric cars start to penetrate global markets, that will save the consumer a considerable amount of money, and help develop power infrastructure in the United States, a country now spending $300 billion a year on foreign oil. The electric car will also have a significantly positive effect on the environment—no matter how the electricity is generated. Obviously, lithium batteries will play a critical role because you need a fair bit of lithium per vehicle that is going to be built. I think people are starting to understand that there's going to be a tremendous pull on lithium. That's really what's driving the excitement.

TER: Lithium is not like gold or copper, two of the most commonly mined metals. If someone is investing in lithium companies, what are some lithium basics that investors should know?

The first rule of thumb is that lithium is an industrial chemical. There is a defined demand for it. Nobody makes jewelry out of lithium. There's not an insatiable demand for the stuff. You want to find the companies that can produce lithium inexpensively. Frankly, that tends to limit you to looking at brine deposits. You can look at hard rock deposits to the extent that you can look at a company like Talison Lithium Ltd. (TSX:TLH), based in Australia. Talison's ore grade is very, very high. It's really a bit of a mutant in the hard rock space. As a result, there are very few other hard rock projects that we think have any hope of doing anything in the market over the longer term. We tend to tell people to look either at brine deposits or possibly at the clay deposits because some of the clay projects out there, especially Western Lithium USA Corp.'s (TSX.V:WLC;PK:WLCDF) King's Valley lithium project in Nevada, have a shot at coming in at a relatively low cost. And cost is key; on the brine side, you really want what you want in every deposit—high grade. You want a high level of lithium in the brine. In Chile, off of the Atacama Desert, you're going to see grades of 2,000 parts per million (ppm) of lithium. That's at the top of the range. Anything over 800 ppm is a very, very strong deposit. But you also need low levels of contaminants like magnesium and sulfates. If you find all of those things, then you have a reasonable deposit. You just need to couple that with great management and good financing and you have yourself a mine. (more) 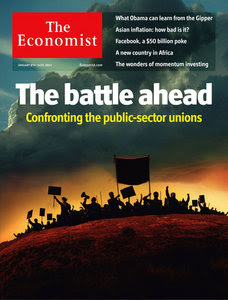 read more here
at 12:09 AM No comments: Links to this post 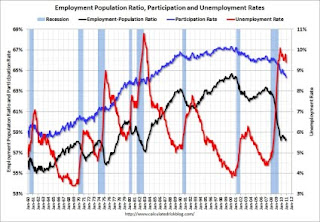 The economy added a total of 103,000 jobs in December. That is far below consensus expectations for a gain of 150,000. The small increase is particularly disappointing relative to the numbers put out on Wednesday by ADP that showed a gain of 297,000 private sector jobs.

Government payrolls declined by 10,000 and the private sector added a total of 113,000. The consensus was looking for a decline of 12,000 government jobs and thus also for a gain of 162,000 private sector jobs. On the other hand, the unemployment rate, which is derived from a separate survey, showed a surprising drop to “just” 9.4% from 9.8% in November. That is the lowest rate since May 2009.

The numbers for October and November were revised higher. Once those are factored in, the overall levels of employment are actually higher than the consensus was looking for. In November we actually gained 71,000 jobs, not 39,000. In October we gained 210,000 jobs, not 172,000 as was reported last month. (more)