In Bailouts, Spain Will Be 'the Biggie': Strategist

The biggest bailout the European Union will have to do if it comes to it will be Spain and it is worrying that there is not a set mechanism on how to go about it, Cornelia Meyer, CEO & Chairman, MRL Corporation, told CNBC Monday.

At the weekend, euro zone financial ministers and Irish officials agreed on a bailout of under 100 billion euros ($137 billion) for Ireland, sending stocks in Europe and the euro higher, as investors breathed a sigh of relief.

But the next in line for European Union and International Monetary Fund money may be Portugal, and then Spain, analysts said.

"We're getting near the end-game in terms of Ireland, and that was a good bailout, and we did all the right things; but hot on the heels of Ireland we have Portugal and then Spain, and Spain will be the biggie," Meyer said.

She predicted that a Spanish bailout would likely cost up to 500 billion euros; but there is no "real mechanism" to deal with it, Meyer added. (more)
at 12:22 AM No comments: Links to this post

The People's Bank of China raised the reserve requirement ratio for its banks by a half-percentage point on Friday in an attempt to control the flow of new money and combat inflation.

China's increase is the second such move in days. The central bank also increased the reserve requirement ratio by 50 basis points on Nov. 10.

But China's central bank didn't touch interest rates. There has been much speculation around the world about a possible rate hike by China, and that has some investors on edge.

The reserve ratio increases are one method China can use to keep its strong economy from overheating.

But China's tightening comes as the Federal Reserve plans for more quantitative easing. The Fed plans to inject money into the economy by buying $600 billion in long-term Treasuries over the next eight months.

The Fed's plan has been attacked by many politicians and economists as a program that effectively undermines the value of the dollar. At the same time, U.S. officials have also been critical of China for keeping its own currency, the yuan, artificially low.

4 Stocks Poised to Benefit as Investors Pile Into the Market

Here's a fairly simple investment premise: if the stock market rises +10% or 15% in the next six months, one sector will rise +30% or even +50%. That's because a rising stock market tends to bring out increased interest from individual investors. And they bring lots more business to online brokers. Indeed, I just wrote how individual investor sentiment is now at its highest level in nearly four years, and these folks are getting bullish simply because the market has been on the rebound since late August.

Lear Capital: Could An Ounce Of Gold Be Worth Trillions One Day?

In a really bizarre moment in history, a single American dollar was actually worth 4.2 trillion German marks.

It really happened. To fund its mega-expensive World War I effort, Germany severed the tie between its mark and gold -- something that's always happened, sooner or later, with government-generated currency.

Today there are no gold-backed currencies in the world.

After 1914 in Germany, the mark became just another fancy piece of worthless paper. No longer tied to gold, there were no longer any limitations on how many marks could be printed. But no worries, either -- the patriotic German populace somehow believed everything would work out fine as long as Germany won the war. Because the winners of wars, everybody knew, always dictated the terms of surrender, including -- and especially -- the economic terms.

By the end of the war in 1918, Germany was a real mess. The Treaty of Versailles imposed steep war reparations, and that did nothing to strengthen a German Reichmark no longer backed by gold or anything else for that matter. (more)

Silver-coin sales will climb as investors seek to protect their wealth from weakening currencies, according to the Perth Mint, producer of about 6 percent of the world’s gold bullion.

“There seems to be more upside with silver than gold right now,” said Ron Currie, sales and marketing director. The mint, founded in 1899, also wants to sell more gold to China even as it scales back production rates from the peak levels seen last year after the 2008 financial crisis, Currie said.

The mint’s outlook adds to signs that global demand for silver, which trades for about 50 times less than gold per ounce, will increase. The Royal Canadian Mint said last week that silver-coin sales will jump more than 50 percent this year. The Perth Mint may match that gain, Currie said in an interview.

Some customers have moved gold holdings into silver, Currie said on Nov. 19. There are no fundamentals to the silver market “but people are buying it,” he said from the mint, which is controlled by the Western Australian government. (more) 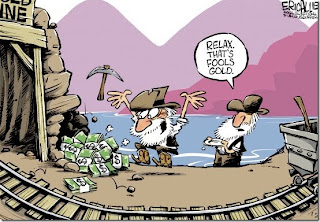 How Mobile "Swipe and Pay" Could Deliver +33% 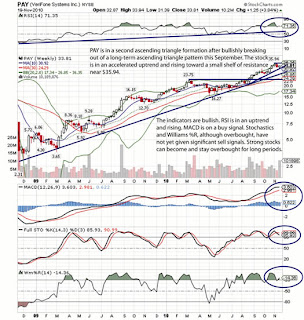 The company behind credit card swiping technology is now working on a system that enables you to "swipe and pay" with your mobile phone. The technology is considered by many experts to be the future of payment systems, so you can imagine the potential this company has.

But what's really fueling the company's growth is its pay-at-the-pump gas station systems. Gas stations worldwide, especially in China, are upgrading their payment systems to Verifone's pay-at-the-pump technology. As such, analysts estimate its revenue could potentially triple in the next four years. 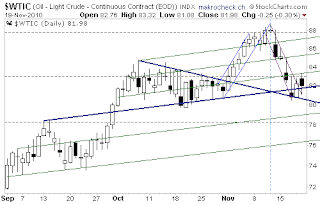 Back in the days, after a well was drilled, an explosive charge was released down the pipe & set off with the anticipation & hope to crack the rock open in order to increase the petroleum flow into the bore hole. These days, acids are mostly used to achieve larger flow rates. Drillers did not have & use blowout-preventers as they do today to control high-pressure reservoirs. Generally, as soon as highly pressured formations are breached, the hydrocarbon fluids (oil & gas) ascend up the well. Once reaching the surface, the hydrocarbons (now in liquid & gas state) hopefully shoot up many hundreds of feet into the air being a classical sign of a successfully discovered & spudded reservoir. However, as soon as the first hydrocarbons break through the surface & a first small blowout of oil & water is noticed, the shooting typically diminishes strongly & fades away for some seconds before the real blowout erupts highly into the air.

The oil-price gusher started to erupt in early November 2010 as the price broke the (blue) triangle-leg at 82. A short breakout to 88 followed, whereafter a classical pullback to the (protracted) triangle occurred. As per definition, the thrust starts directly thereafter – as the price commenced to rise the last 2 days, a thrust to the upside is anticipated (instead of a thrust to the downside). The goal of this thrust is to rise above the resistance that was marked by the previous breakout (88) & to transform it into a new & sustainable support so that a new & sustainable upward-trend can start. (more)

Why you're poorer than your parents 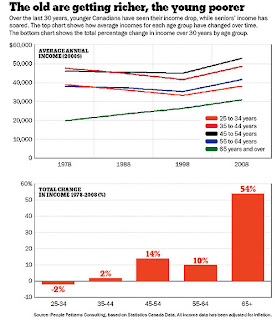 Incomes for young Canadians are falling, even while incomes for retirees soar. What's going on?

Muhammad Ali Jabbar considers himself one of the lucky ones. When he graduated with a degree in mechanical engineering from Toronto's Ryerson University last year, the 25-year-old Milton, Ont., resident already had a decent-paying job lined up in his field. But even so, he finds himself struggling to pay his mortgage, his $30,000 student loan and $15,000 line of credit. "Basically all the money I make goes to paying bills," he says. "I wasn't able to make my payments last month and I got a call from a collection agency. It's discouraging."

Jabbar lived with his parents while he was at university, and held down various jobs to pay for it-he worked at a gas station, he was in the Canadian Forces reserves, and he was the student union president. But he never made enough to cover his $6,200 tuition. Now he's weighed down by such a large debt that he and his wife have decided to hold off on having kids, as he's worried about "having more people to feed."

Many other young families are finding themselves in a similar bind-and the recent recession has shouldered most of the blame. But is this really just a short-term blip that will evaporate over the next few years? Or is there a deeper problem here? To find out, MoneySense commissioned researcher Roger Sauvé to dig through piles of Statistics Canada data to find out how the incomes for different age groups have changed over the 30-year period between 1978 and 2008. He discovered that the high unemployment and low wages that young Canadians ran into during the recession were just the latest in a long string of losses. Even before the recession hit, young Canadians had been losing income and wealth to older generations for years. (more) 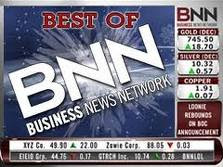 China Inflation May Be Too Hot for Controls Amid Cash Glut

Standing near his 12-table noodle shop on Beijing’s Yonghegong Avenue, owner Liu Heliang says meat and vegetable prices have climbed 10 percent in a year and staff wages are up 40 percent.

“I’m struggling to make ends meet with costs going up like this,” said Liu, a native of Sichuan province who pays his workers as much as 1,800 yuan ($271) a month, or 88 percent more than the Beijing minimum wage, to serve up a staple Chinese meal. “Raising prices is the only way out,” he said, predicting he won’t be able to hold out beyond two months.

Premier Wen Jiabao’s cabinet last week announced it will sell grain, cooking-oil and sugar reserves, ordered an end to tolls on trucks carrying produce and threatened price controls to rein in a 10 percent inflation rate for food. Because the measures would do nothing to counter the 54 percent surge in money supply over the past two years, the risk is they will prove insufficient to cope with the challenge.

“They are just not addressing the fundamental problem at all,” said Patrick Chovanec, an associate professor at Beijing’s Tsinghua University. With the expansion of credit and cash in the economy stemming from China’s response to the global crisis, “you’re sitting on a volcano,” said Chovanec. (more)