John Embry – This Is Why Silver Will Smash Through $100

Today John Embry spoke with King World News about why the price of silver is going to smash through $100 and what the Chinese are up to in critical markets. Here is what Embry, who is chief investment strategist at Sprott Asset Management, had to say: “The central planners recognize that the whole system is based upon keeping the collateral that’s supporting all of this debt elevated. Consequently, if gold and silver were to suddenly start to rocket up in price and truly reflect what’s going on, interest rates would follow briskly behind them and the whole bond market would literally collapse.”
John Embry continues @ KingWorldNews.com
at 12:08 AM No comments: Links to this post

The largest company in the world, Apple (NASDAQ: AAPL), fell almost 9%, but major market indexes were little changed. Markets will likely continue consolidating until some hint of clarity emerges from Washington.

Stock Prices Reach an Important Level
Other than AAPL, many stocks saw only small price changes last week. Because AAPL accounts for about 19% of the assets in PowerShares QQQ (NASDAQ: QQQ), an ETF that tracks the 100 largest Nasdaq stocks, that ETF was down, falling 1.32% for the week. About 4% of the assets in SPDR S&P 500 (NYSE: SPY) are invested in AAPL, but that ETF managed to deliver a small gain of 0.18% last week.

Because AAPL is such a large holding of index funds, the stock can't be ignored. There are some reasons to expect at least a short-term rally in AAPL.

Shown on the chart above is an exhaustion indicator called the DeMark Sequential. It is one of the most widely followed indicators on the more than 200,000 Bloomberg terminals used by market professionals. On Friday, the count reached 12. When the sequential count reaches 13, a buy signal often follows.
Traders will also see that stochastics is on a buy signal on the weekly chart, but is bearish on the daily chart. The indicators are mixed, but I think there is a very high probability we'll see a bounce in AAPL, which would be a positive for the major stock market averages.  (more)

High levels of household debt and sections of the housing market that refuse to cool remain the biggest domestic threat to Canada's economy, the country's central bank says.

"These household imbalances could themselves be a trigger for financial system stress or they could amplify adverse economic shocks originating elsewhere," the Bank of Canada said on Thursday in its Financial System Review, which is essentially a twice-a-year check up on the stability of the system.
The Bank says Canadians are vulnerable to two major and interlinked shows: a significant decline in housing prices and a sharp deterioration in the job market.

The bank notes sales of existing homes have declined and the growth in house prices has slowed. But with the ongoing strong rates of construction, particularly of multiple-unit dwellings in some regions, there are increased worries about "future stock imbalances."

"In this context, there are two dimensions to this risk: on the one hand, a rebound in housing-market momentum may cause a further buildup of imbalances, while on the other hand, the current moderation in the housing market may turn into a more severe correction," it said.

In July, the federal government tightened mortgage lending rules -- the fourth such move since 2008 -- as household debt levels skyrocketed against a backdrop of a frothy real estate market that had been fueled, in part, by ultra-low interest rates.

What does it all mean?

Essentially an oversupply in the condo market could shift the supply-demand dynamic, sparking a sudden correction in prices, the bank said.

"Price corrections in particular segments of the housing market may put downward pressure on house prices more generally. This would likely lead to a decline in housing activity, adversely affecting household incomes and employment, as well as confidence and household net worth, which would in turn reduce household spending," the bank said.

That could then create a domino effect that would hit the broader economy.

David Tulk, chief Canada macro strategist at TD Securities, said the impact of the tighter mortgage regulations that took effect in July has slowed activity in the housing market but it is too soon to tell if the effect will prove to be temporary.

"I think it's a state of the world where we need to be quite vigilant watching how the housing market unfolds," said Tulk.
at 12:06 AM No comments: Links to this post

Waters Corporation, an analytical instrument manufacturer, designs, manufactures, sells, and services high performance liquid chromatography, ultra performance liquid chromatography, and mass spectrometry technology systems and support products primarily in the United States, Europe, Japan, and Asia. Its products are used in various industries to detect, identify, monitor, and measure the chemical, physical, and biological composition of materials, as well as to purify a range of compounds; and in drug discovery and development, including clinical trial testing, the analysis of proteins in disease processes, food safety analysis, and environmental testing. The company also offers thermal analysis, rheometry, and calorimetry instruments that are used in predicting the suitability of fine chemicals, polymers, and viscous liquids for various industrial, consumer goods, and healthcare products, as well as for life science research. In addition, it develops and supplies software-based products that interface with its instruments. The company provides its products for pharmaceutical, life science, biochemical, industrial, food, environmental, academic and government customers working in research and development, quality assurance, and other laboratory applications.

To review Waters' stock, please take a look at the 1-year chart of WAT (Waters Corporation) below with my added notations: 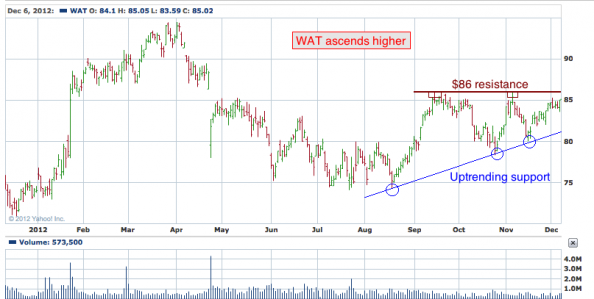 Over the last 3-4 months WAT has created a couple of short-term price levels to watch. First, WAT has formed a clear resistance level at $86 (brown). In addition, the stock has also been forming an uptrending support level (blue). These two levels combined have WAT stuck within a common chart pattern known as an ascending triangle that will eventually have to break one way or another.
at 12:05 AM No comments: Links to this post

The Oil Crash of 2013 ~ The End of our Industrial Civilization

The "Chart of the Day" is Marathon Petroleum (MPC), which showed up on Friday's Barchart "All-Time High" list. Marathon on Friday posted a new all-time high of $60.74 and closed +2.19%. TrendSpotter has been long since Nov 6 at $56.98. In recent news on the stock, JPMorgan on Dec 7 initiated coverage on Marathon with a Neutral and a target of $62. BoF/Merrill on Nov 21 resumed its coverage on Marathon with a Buy and a target of $70. Morgan Stanley on Nov 20 reiterated its Overweight rating on Marathon with a $82 target and said that Marathon provides the best value in the energy sub-sector based on refining value following the spin-off of MPLX LP (MPLX). Marathon Petroleum, with a market cap of $20 billion, is engaged in refining, transporting, and marketing of petroleum products.

This Trade Could be Your Ticket to 27% a Year Income 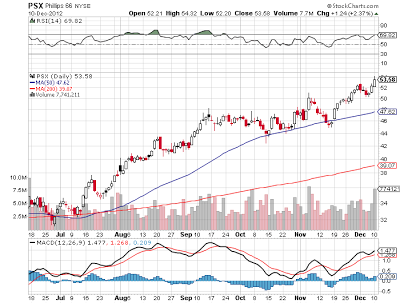 Bad news tends to dominate the headlines and we often miss the signs of good news that are buried lower on the page. One example of good news was the unemployment rate for November falling to 7.7%, a four-year low.

As people return to work, the economy should grow, and that growth will benefit a number of companies. Energy companies are usually among the winners in a growing economy. These companies can be risky, though, especially if the price of oil falls, but there are some companies that are diversified energy plays.


Phillips 66 (NYSE: PSX) is a diversified energy company. With 15 refineries, PSX offers a way to benefit if the demand for oil and gasoline rises, as it would if the economy grows. The company's 10,000 gas stations and retail outlets would benefit from an increase in the number of miles driven. And demand and prices of its chemicals will increase with gains in industrial production. With so many ways to benefit from growth, PSX is in some ways a trade on GDP.

PSX was spun off from ConocoPhillips (NYSE: COP) earlier this year and has a limited trading history. The stock does seem to be undervalued, trading at a price-to-earnings (P/E) ratio of about 6, less than half the average of large-cap stocks in the stock market. Earnings are expected to drop next year, but PSX still looks undervalued with a P/E ratio of 9 based on next year's expected earnings. After falling next year, analysts expect earnings per share (EPS) to grow at about 7.2% a year, a number I think we can use to define a fair value for PSX.

Some analysts believe that a stock is trading at fair value when the P/E ratio is equal to the EPS growth rate, a measure known as the price/earnings to growth ratio (PEG). Analysts expect EPS for PSX to come in at $6.22 next year. Assigning a P/E ratio of 7.2 to those earnings, the stock would have a fair value of about $45 a share. I like PSX as a long-term investment and would like to buy it at $45, and by selling a put I might be able to do that.

Put buyers expect to see a stock price fall. Put sellers may think that the stock price will go up or stay the same, or they may be selling because they are willing to invest in the company at the right price. Since I believe PSX would be fairly valued at $45, I can sell a put at $45 and buy the stock at that price if it falls about 17%. If PSX reaches $45 by the time the put expires, I own a great stock at a fair price. If PSX does not fall that much, I earn income from the premium that I collect when I sell the put.
January $45 puts are trading at about $0.28. Each put option is for 100 shares, and selling one put will generate $28 in immediate income. Brokers allow these types of trades with a 20% margin, or $900 in this case. If the put expires worthless, the 3.1 % income works out to an annualized rate of return of about 27%. If the put is exercised, I believe that PSX will deliver a total return of more than 10% a year in the long-term when the$1.25 a share annual dividend is considered.

PSX looks like a long-term winner, but it also looks slightly overvalued. A put sale creates an opportunity to earn income while waiting for PSX to fall to a fair valuation.

Recommended Trade Setup:
-- Sell PSX Jan 45 Puts at the market price
-- Do not use a stop-loss
-- If the puts are not exercised, the premium received will be a 100% profit; if they are exercised, then PSX will be bought at about 7 times next year's expected earnings