Popular writer and pundit ‘Ranting Andy’ Hoffman from Miles Frankiln precious metals is back to talk to SGTreport. In Part 1 we talk about the fall of Greece at the hands of the IMF banksters and Silver to $50 by summer (which will help to break the backs of the criminal banking cartel). And don’t miss Part 2: $6 Trillion in seized bonds and $1,000 – $4,000 SILVER! 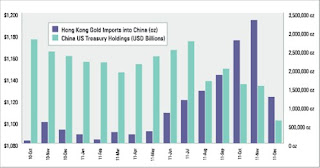 2012 is proving to be the 'Year of the Central Bank'. It is an exciting celebration of all the wonderful maneuvers central banks can employ to keep the system from falling apart. Western central banks have gone into complete overdrive since last November, convening, colluding and printing their way out of the mess that is the Eurozone. The scale and frequency of their maneuvering seems to increase with every passing week, and speaks to the desperate fragility that continues to define much of the financial system today.

The first major maneuver took place on November 30, 2011, when the world's G6 central banks (the Federal Reserve, the Bank of England, the Bank of Japan, the European Central Bank [ECB], the Swiss National Bank, and the Bank of Canada) announced "coordinated actions to enhance their capacity to provide liquidity support to the global financial system".1 Long story short, in an effort to avert a total collapse in the European banking system, the US Fed agreed to offer unlimitedUS dollar swap agreements with the other central banks. These US dollar swaps allow the other central banks, most notably the ECB, to borrow US dollars from the Federal Reserve and lend them to their respective national banks to meet withdrawals and make debt payments. The best part about these swaps is that they are limitless in scope - meaning that until February 1, 2013, the Federal Reserve is, and will be, prepared to lend as many US dollars as it takes to keep the financial system from imploding. It sounds absolutely great, and the Europeans should be nothing but thankful, except for the tiny little fact that to supply these unlimited US dollars, the Federal Reserve will have to print them out of thin air. (more)

According to the data I downloaded from my Stockcharts.com subscription, the cumulative volume so far this year is 110.3 Billion versus 135.5 Billion in the first 37 days of 2011. That is a -18.6% decline.

I continue to caution that, despite the continued superior performance of the 2012 year-to-date rally, the trading volume doesn't offer strong confirmation. 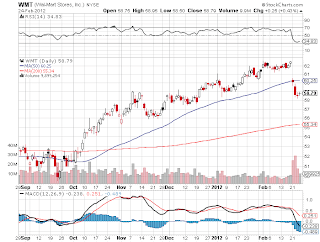 A company as immense as Wal-Mart (NYSE:WMT) is not going to show a great deal of turbulence from quarter to quarter, but there's nothing wrong with steady growth and stepwise execution of a solid business plan. To that end, Wal-Mart shareholders have little to worry about, as management continues to balance an overseas growth strategy with a domestic operating efficiency plan. Although Wal-Mart is not especially cheap, it likely remains a reasonably good conservative play on consumer spending in the United States, tinged with some international growth.

Basically Solid Fiscal Fourth Quarter Results
Wal-Mart didn't deliver too many surprises in its fiscal fourth quarter, and investors basically have to go to the right of the decimal points to find much deviation from expectation.

Sales and revenue both rose about 6% for the quarter, with U.S. sales up a little more than 2% and international sales growing more than 13%. U.S. comps were up 1.5% on an even mix of traffic and ticket, with only apparel sales being notably weak. Sam's Club comps were up more than 5%.

Internationally, the company did well overall, with double-digit growth in Walmex and China. Operations in Japan and the U.K. saw low single-digit growth, while Brazilian comps were down a bit.

Wal-Mart chose to sacrifice a little margin to maintain growth and market share. Gross margin declined 39 basis points as the company re-emphasized its everyday low price positioning and boosted in-stock levels (inventories up almost 12%). Operating income rose about 4%, with management recouping some of the lost gross margin and minimizing the operating margin erosion to 10 basis points.

Fine-Tuning Domestic Execution
Wal-Mart knows that torrid revenue growth is not going to happen in the U.S. market anymore, so the company is keenly focused on its operational execution. To that end, the company is investing more in inventory management, holding higher stock levels and buttressing its low-price positioning.

This is hardly good news for the likes of Target (NYSE:TGT) or the extreme discount retailers like Dollar Tree (Nasdaq:DLTR), Dollar General (NYSE:DG) and Family Dollar (NYSE:FDO). Target in particular seems to be struggling to find its way; rivals like Kohl's (NYSE:KSS) have bled away its momentum in "high-end discounting," while Wal-Mart's scale and extreme efficiency make competing dollar-for-dollar a losing proposition.

Wal-Mart also seems to be building on its strengths in food retailing. This is still a somewhat new venture for the company, but the strong comps in food this quarter suggest that the company continues to widen the gap with the likes of Kroger (NYSE:KR) and Safeway (NYSE:SWY).

Ongoing Square Footage Expansion Overseas
While the U.S. business is about execution, the overseas story is still very much about growth. While it is true that many of the major cities in emerging markets like China, India, Brazil and South Africa are well-stocked with stores, it's a much different story outside of those major cities. Said differently, Latin America and China alone can continue to drive very significant growth for some time to go.

It's worth wondering if Wal-Mart's management will consider any sort of split or tracking stock to give investors a more distinct choice between the cash-rich U.S. operations and the growth-rich international business. Yes, there is Wal-Mart de Mexico (OTCBB:WMMVY.PK), but a fuller separation could be of interest to some investors.

Wal-Mart has been a market-beater over the past year and sits near its 52-week high. Though the stock is not overvalued today, neither is it cheap. Wal-Mart is a decent enough hold at today's prices, but investors buying today are looking at a pretty narrow margin of safety relative to fair value. 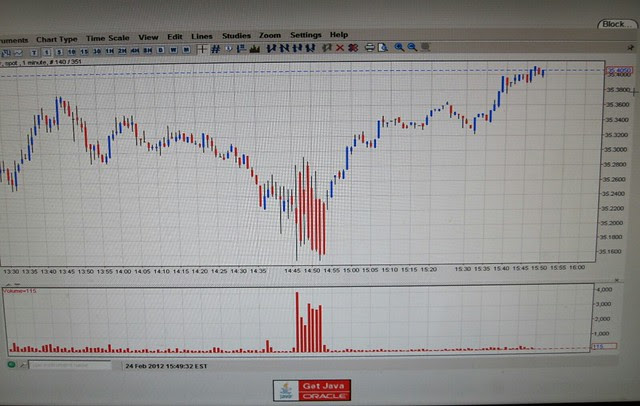 If you happen to need to take a trip to an NYC ER room tonight and experience an extraordinarily long wait, The Doc’s about to explain why.

Silver has put in a monster rally this week, and much to the cartel’s dismay, was preparing to close the week above $35.50 today, preparing a break-out next week that could potentially fill the gap from the September smash to $40, and see silver off to the races back to challenge the all-time nominal highs near $50. Obviously, the cartel stepped in with a massive paper raid to prevent such a bullish weekly close.

That’s where things got interesting and likely induced more than a few Myocardial Infarctions today among JPMorgan execs.

Martin Armstrong: The British Pound the Decline and Fall 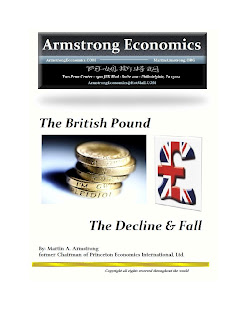 
The British Pound the Decline and Fall

Today Ben Davies told King World News that a new buyer has come into the gold market. This buyer is very large and it has trapped some of the shorts in the gold market. Davies, who is CEO of Hinde Capital, also spoke with KWN about short-term price targets. Here is what Davies had to say: “Fantastic action indeed and I think it’s caught a lot of the participants in the market offside. When a market moves, as gold did, from structurally oversold and moves back quite quickly in the medium-term, particularly when a market is perceived to be in a bear phase, people are very keen to take to the short side of the market.”

The "Chart of the Day" is IBM (IBM), which showed up on Thursday's Barchart "All Time High" list. IBM on Thursday posted a new all-time high of $199.23 and closed up 1.93%. TrendSpotter has been Long since Jan 23 at $189.98. In recent news on the stock, Sterne Agee on Feb 6 initiated coverage on IBM with a Buy and a target of $230. IBM, with a market cap of $228 billion, sells a broad range of technology-based hardware, software and services.

[Ed. Note: We first covered this story here. You can get the background on this story in the video below, for those of you playing catch-up... Below that, is a copy of the document in question, the one which he speaks about in the video. It was posted here.]

A scanned document of the contract between Yohannes Riyadi and the Federal Reserve:

END_OF_DOCUMENT_TOKEN_TO_BE_REPLACED

The S&P 500 rose on Friday to close at the highest level since before the collapse of Lehman Brothers in 2008, continuing a pattern of steady gains on signs of U.S. economic recovery.

The broad index has risen more than 8 percent this year, a rally built on a succession of modest gains, with only a handful of losses, none greater than a 0.7 percent drop.

Many analysts still expect a more significant pullback, but worries about an impending correction have been blunted by a string of upbeat economic reports.

"We're grinding higher, but it doesn't seem like there's a whole lot of conviction on either side," said Brian Lazorishak, portfolio manager at Chase Investment Counsel in Charlottesville, Virginia.

The lack of conviction could be seen in the recent low volumes. An average 6.4 billion shares changed hands daily on the NYSE, NYSE Amex and Nasdaq this week, compared to a 7.81 billion daily average during February 2011.

Volatility has also remained low, with the CBOE volatility index (:.VIX) down about 11 percent so far this month.

For the week, the Dow and S&P rose about 0.3 percent and the Nasdaq added 0.4 percent to close at its highest since mid-December 2000.

The S&P 500's close was the highest since June 6, 2008, a few months before Lehman Brothers went bankrupt as the global credit crisis spiraled out of control.

The S&P 500 has struggled to climb above last year's intraday high near 1,370. The level has thrown up strong resistance in the past week, but a break above could set the market up for more gains.

Above that level the benchmark "would not be any more overbought than it already is and may in fact bring in some technical buying," Lazorishak said.

U.S. consumer confidence hit its highest point in a year this month despite a strong rise in gasoline prices, while new home sales fell in January but upward revisions to prior months' sales helped confirm the housing market is in a recovery.

According to Thomson Reuters data through Friday morning, of the 461 companies in the S&P 500 that have reported earnings, 63.3 percent topped expectations. That is below the 70 percent beat rate in the past four quarters but above the average of 62 percent since 1994.

The Morgan Stanley healthcare payor index (NYSE:^HMO - News) gained 1.6 percent, with Wellcare Health Plans (NYSE:WCG - News) up 5.9 percent to $71.10 after a roadblock to a legal settlement was removed.