Oil futures were on the tip of every political and financial pundits’ tongues less than a month ago as geopolitical tensions in Iraq heated up. Fast forward to today, and tensions in the Middle East have intensified further. However, since June 25th oil prices have been falling fast.
Oil futures prices have fallen from around $107.50 per barrel down to around $101.50 / barrel as I am writing. As the chart below indicates, oil futures should see some support around the $101 per barrel price level and stronger support yet down around $98 per barrel. 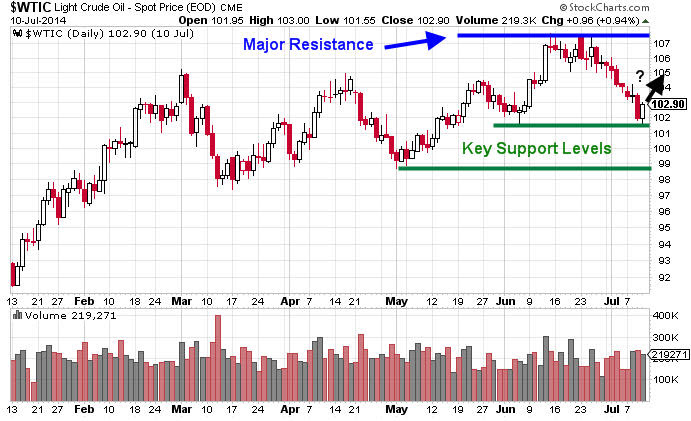 Is this a pullback that is setting up for a larger move to the upside, or is oil prices going to move down toward $95 / barrel again? Purely from a statistical standpoint, including June 25th through today oil prices have traded 12 sessions. During those 12 trading sessions, oil prices only managed to close in positive territory 4 times with some very strong selling pressure along the way. In raw percentage terms, oil futures have lost nearly 5.5% since June 25th peak to trough.  (more)
Please share this article
at 12:05 AM 1 comment: Links to this post

Naked Shorts on Gold, Now and in 1933, Point to Gold Confiscation, Soon!

If you're planning to buy gold, it woldn't hurt to spend an hour or two, hearing a discussion about gold confiscation It's much like a college exam; It's not possible to over prepare, but most who take the exam will under prepare for it This one hour and fifteen minute discussion could be useful, if you hear it with pen and paper in hand, making notes about your ideas, like things to investigate, before you buy I hope you do not do what I did, listen to a dealer of the precious metal and then buy, heavily, relying on bad advice, because I lost 40% of the value in two years By the way, I listened to one dealer and bought from another I recall thinking that the dealer was crazy to sell a precious metal that would be worth so much more, very soon Looking back, I see very clearly why he sold, the price fell by 40% He knew what he was doing and I didn't! I got 'experienced' There are three people here The broker who said that silver is in short supply and we need to buy Me, the putts who fell for the lie and the broker who unloaded his cargo and sunk my ship Two of us are wrong; The liar and the fool Don't trust liars and you won't be anyone's fool
Please share this article
at 12:04 AM No comments: Links to this post While larger names in the patch including Suncor Energy, Canadian Natural Resources, and Husky Energy continue to provide investors with steady dividends and growth, it is the smaller, more exciting oil explorers and producers that offer the greatest potential upside. Let’s take a closer look at three smaller players from the patch with solid growth potential.

John Williams, founder of Shadowstats.com, points out there are more than $16 trillion liquid dollar assets held outside of the United States. If everybody starts dumping their dollars, Williams says, "That could trigger very high inflation here. You will see, for example, higher oil prices. You will also see mounting pressure, that is already there, to have the dollar removed as the world reserve currency, and that would accelerate domestic inflation. I am still looking for a near term hyperinflation; that is dependent on a very heavy decline in the U.S. dollar."

How bad could things get on the inflation front? According to Williams, measured against gold, the dollar could become virtually worthless. Williams contends, "In a hyperinflation, which I am looking to evolve here, gold could be $100,000 per ounce or a million dollars per ounce. All that reflects is purchasing power of the dollar assets you put into gold represent the purchasing power if you kept your asset in dollars. Gold is a store of wealth. I am not looking at this to make profits. I am looking at this as a long term hedge against high inflation to maintain purchasing power for the terrible currency crisis ahead."
Please share this article
at 12:03 AM No comments: Links to this post 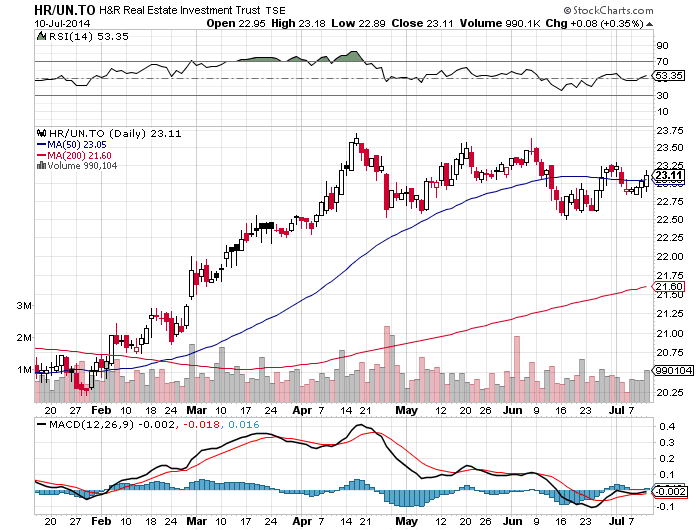 Here are three real estate investment trusts that we recommend for buying at recent prices.

Canadian Real Estate Investment Trust or CREIT (TSX-REF.UN), delivered strong financial results in its first quarter, with funds from operations, or FFO, rising seven per cent year-over-year.
CREIT owns and manages a diversified real estate portfolio of retail, industrial and office properties (including a limited number of development properties) throughout Canada.
The portfolio’s 197 properties, including development properties, contain 31.9 million square feet of gross leasable area, with CREIT’s ownership interest at 23.9 million square feet.
For the three months ended March 31, 2014, CREIT’s funds from operations, or FFO, were $50.2 million, or $0.73 a unit, compared with $46.7 million, or $0.68 a unit, in the same period of 2013.
The decrease was primarily attributed to property transactions, a declining cost of debt, improvements in same-asset performance and higher interest income.
In February, CREIT increased its distribution to $1.75 a unit from $1.65. On a quarterly basis, the distribution is 58.8 percent of the first quarter’s FFO, giving the trust plenty of flexibility to raise the distribution in the future.
CREIT’s existing real estate portfolio should let it continue to deliver stable and rising distributions. And a strong balance sheet positions it to pursue income growth opportunities. Its goal is to consistently average year-over-year FFO growth of two to three per cent.
The units are a buy below $46.00.

H&R (TSX-HR.UN) has agreed to sell a 50-per-cent non-managing interest in three enclosed shopping centres within its Primaris portfolio.
The REIT acquired Primaris REIT last year for $3.1 billion. The purpose of the purchase was to gain exposure to high-quality shopping malls across Canada.
With the purchase, H&R became not only an owner, but a third-party manager of regional shopping centres.
By acting as manager, the REIT should be able to increase the growth rate in the funds from operations earned from these malls.
And the divestment of the 50-per cent stake in the three shopping malls further leverages the benefits that stem from this management role.
For one thing, H&R reduces its equity investment but still generates management fees. Second, the REIT reduces risk through its reduced stake. And third, it’s able to redeploy about $113.0 million in net proceeds from the sale to other opportunities.
The REIT reported solid first-quarter results. For the three months ended March 31, 2014, H&R’s FFO were $135.2 million, or $0.47 a unit, compared with $90.0 million, or $0.45 a unit, in the same period of 2013.
The economic outlook for commercial real estate in North America is positive, particularly in the U.S., where H&R has a sizable investment.
H&R is a buy.

Despite a competitive acquisition environment in its industry, RioCan REIT (TSX-REI.UN, $27.16) has purchased its partner Trinity’s interest in three high-quality developments in various stages of completion.
For a total consideration of $105 million, the REIT has acquired Trinity’s 10-per-cent interest in Calgary’s East Hills new format retail centre; a 25-per cent interest in McCall Landing, also in Calgary; and a 25-per cent interest in The Stockyards in Toronto.
The acquisition of these interests further increases RioCan’s portfolio concentration in Canada’s six major markets, a long-stated objective.
And in the case of The Stockyards, the REIT has increased its interest in a Target-anchored shopping centre in a densely populated community.
For the three months ended March 31, 2014, RioCan’s operating FFO were $127 million, or $0.42 a unit, compared with $124 million, or $0.41 a unit, in the same period of 2013.
The increase was primarily due to a rise in operating income caused by acquisitions, same-store growth of 3.1 per cent for Canada and 3.0 per cent for the U.S., favourable foreign currency exchange, straight-line rent of $2.4 million and lower interest expense.
The units are a buy below $28.00.
Please share this article
at 12:03 AM 1 comment: Links to this post