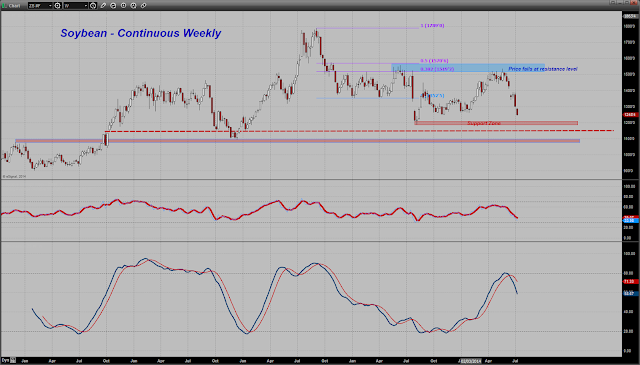 traderdannorcini.blogspot.com / Dan Norcini /
Ever since that last USDA report, wherein the agency surprised the market with a big jump in planted acreage, the beans have been on the defensive. That report, plus the continuation of very good growing conditions changed the dynamic completely in the beans. Prior to the report, the focus of many traders was the continued tightness in old crop carryover. Simply put, the market was of a mind to ration demand so as not to run out of available bean supply prior to this year’s harvest. It was that old crop carryover tightness that had been the driving factor particularly in the July and to some extent, the August bean contracts. New crop November had been yanked, tugged, pulled and generally distorted by the buying in those former mentioned contracts.
READ MORE
Please share this article
at 12:05 AM No comments: Links to this post

Qihoo 360 Technology Co. Ltd. provides Internet and mobile security products and services in the People’s Republic of China. Its core Internet security products include 360 Safe Guard, a solution for Internet security and system optimization; 360 Anti-Virus, an anti-virus application that uses multiple scan engines to protect user’s computers against various kinds of malware, as well as 360 Mobile Safe, a security program for the Google Android, Apple iOS, and Windows smartphone operating systems.
To review Qihoo’s stock, please take a look at the 1-year chart of QIHU (Qihoo 360 Technology Co. Ltd.) below with my added notations: 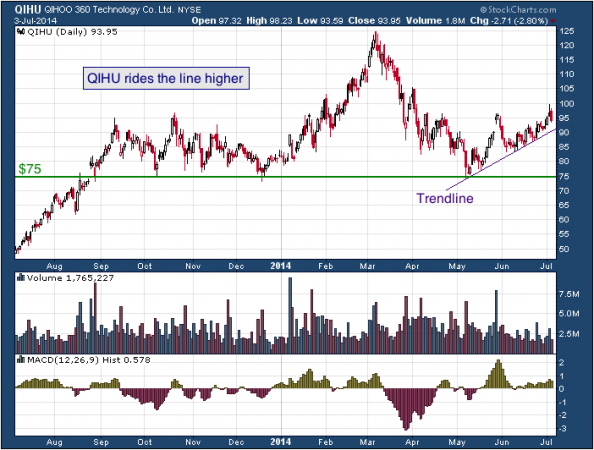 After selling off in March and April, QIHU has formed a trend line of support (purple) since its May bottom. Always remember that any (2) points can start a trend line, but it’s the 3rd test and beyond that confirm its relevance. As you can see, the market deems QIHU’s trendline to be very important. In addition, the stock also has a key level of support at $75 (green).

The Tale of the Tape: QIHU has a trend line support and a lower $75 support. A long position could be entered on a pullback down to the trendline, which currently sits near $92. A short position could be entered if QIHU were to break below the trendline with an expectation of a fall back down to $75.
Please share this article
at 12:04 AM No comments: Links to this post

kingworldnews.com / July 9, 2014
With global stock markets recently hitting new and in some cases all-time highs, KWN is pleased to share a chart which exposes the nightmare of bullish sentiment that the Fed has created.  The spread between the bulls and bears is now solidly in the danger zone as the astonishing chart below illustrates.
Here is the latest Investors Intelligence report along with the all-important sentiment chart:  Markets started the long July 4 weekend with the main indexes all at highs. Indicators also strengthened over the week, with most oscillators overbought and at their prior top levels. A few newsletter editors noted the strong action and shifted back to bullish, including some changes after yesterday’s modest decline. The result was a resumption of the overly optimistic expectations recently shown. Again they signal potential danger ahead for the market.
READ MORE
Please share this article
at 12:04 AM No comments: Links to this post

Recent IPO”s can be a great source of bullish setups if they start strong out of the gate. SDPI has rallied 75% after it’s initial public offering and has come off a bit, but is holding most of those gains. In fact, right now it is forming a base from where it could springboard higher so keep this on your radar if you are looking for a bullish speculative play in the oil sector.

French Industry Calls for Massive Devaluation of the Euro 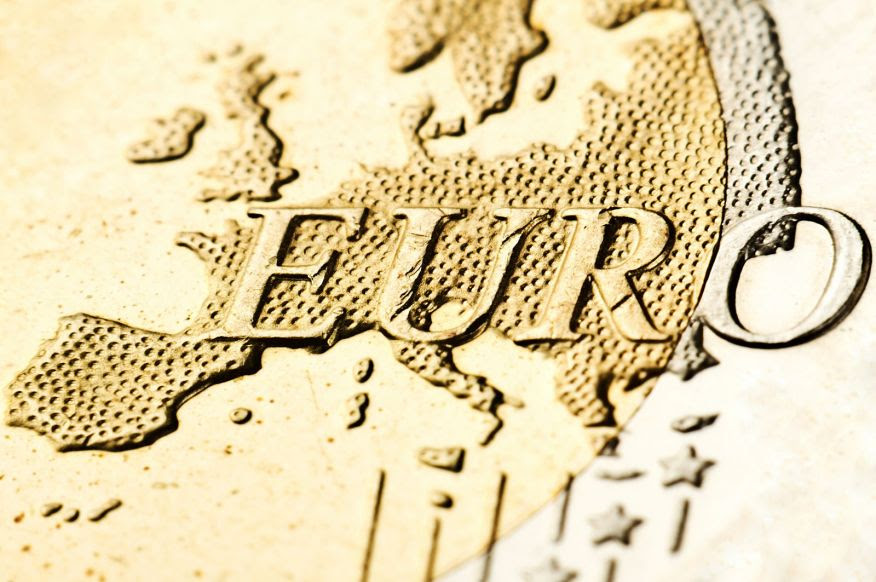 armstrongeconomics.com / By Martin Armstrong / July 9, 2014
Head of Airbus in France calls on the ECB to lower the rate of the euro by massive money printing to $ 1.20. Like other states, he is calling effectively for a devaluation of the Euro to make European goods competitive in world markets. The Eurozone use currency as a weapon. The Airbus Group would benefit from a weaker euro in order to sell more planes. This is the same thing we are looking at with respect to the sequence of events We had the age of competitive devaluations to get better trade deals throughout the ages.
SOURCE
Please share this article
at 12:03 AM No comments: Links to this post