The Gold Report caught up with John Embry, Chief Investment Strategist, Sprott Asset Management, to get his thoughts on gold and some mining stocks he favors. Embry, an industry expert in precious metals, has researched the gold sector for over 30 years. Read about why he thinks gold could gain another 30% this year as a greater proportion of the public realizes the degree of difficulty that sovereign debt is in. He believes as confidence in gold returns people will seek an outlet in gold stocks, especially small-cap gold producers and junior explorers with solid projects.

The Gold Report: John, in Investors Digest of Canada you recently said you're expecting gold to gain another 30% this year.

John Embry: I would say at least 30%. I said that I thought it would be the best year to date. We've had nine years consecutive higher year-end prices and the best year in that span for a year's return was 31%. I think this will be the year that we exceed it in this, the 10th year of the bull market. (more)

Congress should act immediately to abolish credit default swaps on the United States, because these derivatives will foment distortions in global currencies and gold. Failure to act now will only mean the U.S. will be forced to act after these "financial weapons of mass destruction" levy heavy casualties. These obligations now settle in euros, but the end game is to settle them in gold. This is so ripe for speculative manipulation that you might as well cover the U.S. map with a bull's-eye.

Credit default swaps are not insurance. If you buy fire insurance on your home, you must own the house. If you buy credit protection on the United States, however, you do not need to own U.S. Treasury bonds. If your protection gains value after you buy it -- not because the U.S. defaults, but because of market mood changes -- you can resell that protection and make a profit. (more)

Equity mutual funds are burning through cash at the fastest rate in 18 years, leaving them with the smallest reserves since 2007 in a sign that gains for the Standard & Poor’s 500 Index may slow.

Cash dropped to 3.6 percent of assets from 5.7 percent in January 2009, leaving managers with $172 billion in the quickest decrease since 1991, Investment Company Institute data show. The last time stock managers held such a small proportion was September 2007, a month before the S&P 500 began a 57 percent drop, according to data compiled by Bloomberg.

For Parnassus Investments and Janney Montgomery Scott LLC, depleted reserves is a sign returns will fall from last year, when the S&P 500 rose 23 percent, the most since 2003. Bulls say any pullback is a buying opportunity because investors have $3.17 trillion in money-market funds and may return to stocks after putting 16 times more money into bonds since last March. (more) 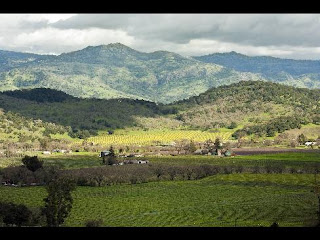 In California’s Napa Valley, producer of the most expensive U.S. wines, 2010 may be a vintage year for foreclosures as the industry is squeezed by falling land values and a consumer shift to cheaper brands.

As many as 10 wineries and vineyards in Napa will change hands in distressed sales or foreclosures this year and next, up from none in 2008, according to Silicon Valley Bank. In a bank survey of vintners, 7 percent called their finances “very weak” or “on life support.”

“We have 250 vintner clients saying this downturn is the worst in 20 years,” Bill Stevens, manager of the bank’s wine division in St. Helena, California, said in an interview. “Anybody who was late to the party won’t have staying power.” (more) 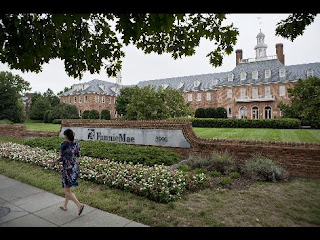 Yields on Fannie Mae and Freddie Mac mortgage securities that guide U.S. home-loan rates are trading at the lowest relative to Treasuries on record, even as the scheduled end of Federal Reserve purchases approaches.

The difference between yields on Washington-based Fannie Mae’s current-coupon 30-year fixed-rate mortgage bonds and 10- year Treasuries narrowed 0.02 percentage point today to about 0.63 percentage point to match the smallest spread since at least 1984, according to data compiled by Bloomberg.

Spreads on agency mortgage bonds have held near lows while the unprecedented Fed program, in which the central bank is buying $1.25 trillion of the debt, nears its March 31 conclusion. Some investors consider the debt more attractive at tighter “nominal” spreads because of declines in expectations for interest-rate volatility, affecting how certain they can be about how long it will remain outstanding, according to JPMorgan Chase & Co. (more)

Most U.S. business economists expect the Federal Reserve to raise benchmark interest rates within six months by between a quarter and a half percentage point, according to a survey released on Monday.

A majority of economists in the National Association of Business Economists' semiannual survey found the Fed's current stance of rates near zero percent is appropriate. A growing number, however, believe the U.S. central bank's policy's are too stimulative, according to a poll of 203 members taken Feb. 4-22.

"A majority believes that a rise in interest rates is both likely and appropriate in the next several months," said NABE President Lynn Reaser.

The Fed has said continued high rates of unemployment and low inflation warrant holding rates exceptionally low for an extended period. Still, reports show the economy is recovering gradually, and some policy makers believe the Fed should begin to prepare markets for the beginning of the process of tightening financial conditions. (more)
at 3:41 AM No comments: Links to this post

To Hell in a Handbasket

I live in New York. To say that the politics of my state are dysfunctional would be like saying that Adolph Hitler could sometimes be not such a nice fellow. It’s all true, of course. It just doesn’t do just justice to the scope of the crimes committed.

We have a governor (as of this writing, anyhow) who just got blasted by the New York State Commission on Public Integrity for lying to them under oath in their investigation of him. But that’s okay. Before that, he accepted the favor of free tickets to the World Series, which is what he lied about. But that’s okay. Before that he was putting pressure on a woman who was the victim of domestic violence to go away and shut up. But that’s okay. The person who was beating and choking her was one of his top staffers. But that’s okay, before that he and his wife were involved in all sorts of tawdry but unspecified sex and drug related scandalous behavior. But that’s okay. He’s the governor who came in after the last governor had to resign because he was laundering money in order to visit high-priced hookers. But that’s okay. Everybody in Albany is out of control, including one state senator who cut his girlfriend’s face open with broken glass, and a former leader of the Senate on trial for wholesale corruption. But that’s okay, because none of them actually do anything, anyhow. (more)
at 3:39 AM No comments: Links to this post

How Goldman Sachs (Rothchilds) took over the world

If there's something weird in the financial world, who you gonna call? Goldman Sachs.

The US government, involved in a firefight against the conflagration in the credit markets, is calling in another crisis-buster from the illustrious investment bank, this time Goldman's most senior banker to finance industry clients, Ken Wilson.

And so with this appointment, the Goldman Sachs diaspora grows a little bit more influential. It is an old-boy network that has created a revolving door between the firm and public office, greased by the mountains of money the company is generating even today, as its peers buckle and fall.

Almost whatever the country, you can find Goldman Sachs veterans in positions of pivotal power. (more)

In a recent conversation with a fellow gold analyst, he was emphatic that the price one pays for physical gold should be ignored. “What’s far more important,” he insisted, “is how many ounces I own in relation to the total value of my assets.”

Building a core position in gold bullion is a smart goal, to be sure, and a strategy Casey Research has been advising for years. However, ignoring the price you pay for gold could be seen as foolhardy; sure, it’s insurance, but isn’t price part of the consideration when you shop for insurance?

The World Gold Council just released their 2009 annual report on gold trends. From the densely populated pages of interesting data, there’s one compelling tidbit I gleaned that may shed some light on the buying behavior of gold investors. (more) 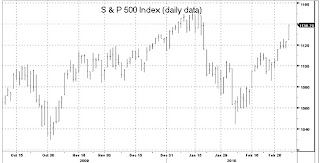