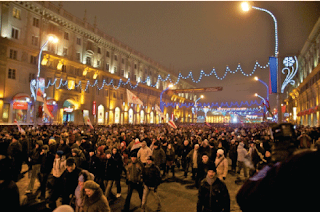 L: Tatich, I'm in Minsk, where I just recorded/participated in an illegal march through the city. Opposition supporters rallied... there has been some violence... I hear they've broken into a government building, but I have not been able to confirm that yet.

Doug: Sounds like fun. Maybe some appropriate music should accompany the festivities. The Marseillaise worked for the French in the 1790s… let me think… you should play them Street Fighting Man on your iPhone.

L: I should have stayed longer. The crowd seemed to be breaking up, so I came back to my flat, and now I'm seeing reports that the "special police" have turned violent. I left friends there… (more) 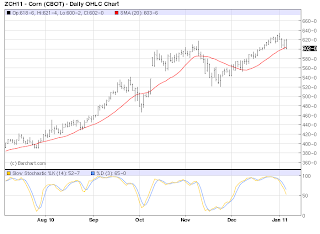 For as stable as the corn futures looked after Wednesday's trade it was that unstable after Thursday's trade. The Wednesday night session was narrowly mixed but on the Thursday day session re-opening selling re-appeared. Weekly export sales were disappointing but we did not didn't think they were bad enough for the old crop to totally reverse Wednesday action. Thursday's weakness may have been front running of the rebalancing that is scheduled to start on Friday or perhaps some of the Index funds already started. Open interest from Wednesday's higher price action rose by 9,975 contracts this has to be viewed as some of the anticipated new money coming in. Thursday's action showed no evidence of this unless one looks to new crop. That spread lost as much as 9 cents. Yesterday the big fertilizer firm, Mosaic, predicted that U.S. farmers would plant 92-93 million acres this coming year. The Brazilian government is suggesting their corn crop is 52.7MT versus the USDA at 51.0MT. Recent rains were scheduled to move out of Argentine on Thursday. Coverage was barely enough to maintain status quo which according to most is not that good. Forecasts are calling for light scattered showers this weekend and again mid next week. The private analytical firm Informa, is suggesting the Argentine corn crop is 23.75MT versus the USDA at 25.0MT. It's amazing to see the differing

Guesstimates of the Argentine corn crop ranging from a low of 19.5MT to as high as 24.0MT. Informa has also agreed with recent Chinese estimates that their corn crop is closer to 172.0MT versus the USDA at 168.0MT.

Basis levels in the U.S. interior are mixed; some a bit easier, some a bit firmer. The US Gulf basis continues to ease. This confirms the sloppy spread action in the futures' markets. (more) 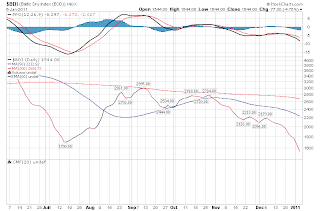 Philadelphia, Pa January 2011….Dow Jones daily stock averages is the feel good third rail 'now you see it and now you don't' of

The Pyramid scam fraud is repeated verbatim from c.1660 England to the bowels of lower Manhattan with the formal inception of the "Buttonwod Agreement" c.1792 birth of the New York Stock Exchange financial market.

A sensation that accelerates every human emotion, the Dow Jone rising every day hits new stock market highs. It feels good, it is correct, the future is bright, things are going as planned, no need to look any further at soothsayers three card Monte statements "now you see it and now you don't." Dow Jones feel good philosophy is not reflecting the US economy or is it correlating wealth of any kind. It's a total hoax. (more)

Ron Paul: "The U.S. Government Must Admit It Is Bankrupt"

BlackRock Inc.’s Daniel Rice, who beat 99.9 percent of U.S. stock-fund managers over the past decade, said an expanding global economy will probably push oil prices above $100 this year.

The gain may lift shares of oil and gas companies by 25 to 30 percent and help double the price of coal stocks, the manager of the $1.5 billion BlackRock Energy & Resources Fund forecast in an interview in his Boston office. His biggest concern, Rice said, is what happens if oil rises even higher.

“I will be bullish on the stocks for part of the next surge, but I won’t be if oil gets to $120,” said Rice, whose fund returned 18 percent a year over the past decade

Crude topped $92 a barrel Jan. 3, the highest in 27 months, helped by an economic rebound, stock market gains and a decline in inventories. Rice, the longest-serving manager of a U.S. energy mutual fund, according to Chicago-based Morningstar Inc., said oil may rise high enough by 2012 to trigger a global economic slowdown, much as it did in 2008 when oil reached $145 a barrel.

“If the world keeps growing at this rate, it strains the whole system,” said Rice, who believes an oil price between $85 and $90 a barrel is the most the world can tolerate for an extended period. “There just are not enough commodities to satisfy the demand.” (more)

Why the World Is Financially Doomed in Four Charts

The global economy is doomed to implosion, and here are four charts which explain why.

Though the complexities may appear endless, the global economy's coming implosion is really fairly easy to understand: here are four charts which do the heavy lifting. It boils down to these basics:

1. When money is dear and difficult to borrow, then productivity and capital accumulation are encouraged, speculation, malinvestment and debt-based consumption are discouraged.

2. When money is "free" (zero-interest rate policy) and liquidity is unlimited, then the opposite conditions hold: speculation in risk assets, malinvestment and debt-based consumption are all encouraged, and productivity and capital accumulation are heavily discouraged.

3. When debts exceed the value of the underlying assets, the only way out of the Tyranny of Debt is to write off the debt on both the borrower and lender's balance sheets, wiping out their capital via liquidation and bankruptcy.

4. The "extend and pretend" policy pursued by all major nations is simply transferring the impaired debt from private hands to the taxpayers (public debt), crippling the economy with higher taxes and higher debt service. (more)

Why Are Taxpayers Subsidizing Facebook, and the Next Bubble?

Simon Johnson, the former chief economist at the International Monetary Fund, is the co-author of “13 Bankers.”

Goldman Sachs is investing $450 million of its own money in Facebook, at a valuation that implies the social-networking company is now worth $50 billion. Goldman is also creating a fund that will offer its high-net-worth clients an opportunity to invest in Facebook.

On the face of it, this might seem just like what the financial sector is supposed to be doing – channeling money into productive enterprise. The Securities and Exchange Commission is reportedly looking at the way private investors will be involved, but there are more deeply unsettling factors at work here.

Remember that Goldman Sachs is now a bank-holding company – a status it received in September 2008, at the height of the financial crisis, in order to avoid collapse (see Andrew Ross Sorkin’s blow-by-blow account in “Too Big to Fail” for the details.)

This means that it has essentially unfettered access to the Federal Reserve’s discount window – that is, it can borrow against all kinds of assets in its portfolio, effectively ensuring it has government-provided liquidity at any time. (more)
at 12:12 AM No comments:

When Will Gold and Silver Go Down?

Gold and silver are in a bubble, if the bulk of economists and financial pundits are to be believed. With no dictionary definition of what exactly a financial bubble is, we are left to our own devices to interpret the significance of such a proclamation according to our own experiences.

Lets say we consider a bubble the phenomenon whereby the prices paid for a given commodity, be it homes, coffee, copper, rubies or tulips, rises rapidly relative to an average market history timeline as a result of sudden and irrational investor demand, and then shortly thereafter sees a price collapse to a point lower than when the bubble started.

Consistent with all commodities that can have been categorized as recipients of bubble phases over the last 200 years is that at that onset of the bubble formation phase, the utile value of the commodity in question becomes the subject of elevated speculation in anticipation of an increase in demand as a result of a predicted rise in utile consumption. (more)

Housing collapse will result in new types of 'declining cities' 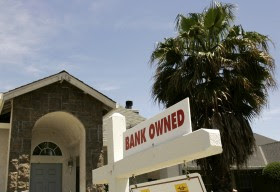 U.S. metropolitan areas which have suffered the steepest drops in housing prices are poised to endure long-term deterioration similar to how certain cities in the Rust Belt were permanently damaged by the decline of manufacturing.

According to a new report published by the Research Institute for Housing America, a division of the Mortgage Bankers Association, a new kind of "declining city" will emerge in the U.S. that will witness neighborhoods with high rates of vacancies and a sustained drop in population.

Indeed, certain urban and suburban areas in California, Nevada and Arizona will become like the fading old post-industrial cities in the East like Cleveland, Buffalo and Detroit.

"Some neighborhoods are going to suffer tremendously or are never going to come back or come back very, very slowly," said James R. Follain, senior fellow at the Rockefeller Institute of Government and author of the study. (more) 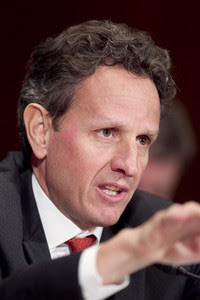 Treasury Secretary Timothy F. Geithner said lawmakers must raise the federal borrowing limit in the first quarter of 2011 or risk a default on U.S. debt and a loss of access to global credit markets.

A failure to act would cause “catastrophic damage to the economy, potentially much more harmful than the effects of the financial crisis of 2008 and 2009,” Geithner said in a letter to Speaker of the House John Boehner, Senate Majority Leader Harry Reid and all other members of Congress. Lawmakers should act before a default becomes “imminent” because damage from even a short-term disruption “would last for decades.”

The Treasury estimates the debt limit could be reached as early as March 31, and “most likely” between that date and May 16. The limit stands at $14.29 trillion, leaving about $335 billion of “headroom,” Geithner’s letter said. (more)