The idea that the government of a major advanced country would default on its debt -- that is, tell lenders that it won't repay them all they're owed -- was, until recently, a preposterous proposition. Argentina and Russia have stiffed their creditors, but surely the likes of the United States, Japan or Britain wouldn't. Well, it's still a very, very long shot, but it's no longer entirely unimaginable. Governments of rich countries are borrowing so much that it's conceivable that one day the twin assumptions underlying their burgeoning debt (that lenders will continue to lend and that governments will continue to pay) might collapse. What happens then? (more)
at 4:16 AM No comments: 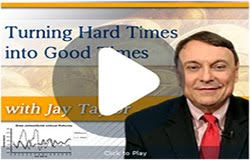 Inside the thick Goldman Sachs investment circular were the details of a secret, $2 billion deal channeled through a Caribbean tax haven.

The Sept. 26, 2006, document offered sophisticated U.S. and European investors an opportunity to buy into a pool of supposedly high-grade bonds backed by residential, commercial and student loans. The transaction was registered through a shell company in the Cayman Islands.

Few of the potential investors knew it, but the ratings of many of the mortgage securities hid their true risks and, in some cases, Goldman's descriptions exaggerated their quality. (more)

"Jonathan May formerly worked for the International Monetary Fund in England. In the early 1980s he came to America with a plan to release Americans from debt to the banking system by employing the same "credit creating" system used by international banking. The law governing this system is the Uniform Commercial Code (UCC). May was initially successful. Eventually, however, he was targeted and imprisoned by the banking system. He is now in a Federal prison in the midwest. While in prison he was interviewed by Lindsey Williams via phone." This is a talk, given by Lindsey Williams in 1986, covers the continuing efforts of International Bankers to control the economies of the world through 20:1 fractional lending, gold and oil manipulation, and eventually the setup of one world central bank.
http://video.google.com/videoplay?docid=5541564304553695985#
at 3:52 AM No comments:

White House Chief of Staff Rahm Emanuel has been telling Democratic members of the House Financial Services Committee that he supports amending the Investor Protection Act of 2009 -- a bill designed to beef up protection for investors -- in order to exempt small businesses from a requirement in the Sarbanes-Oxley Act that mandates audits of internal controls. The Sarbanes-Oxley Act was enacted in 2002 in the wake of accounting scandals at Enron and Worldcom that rocked investors and damaged confidence in the markets. (more) 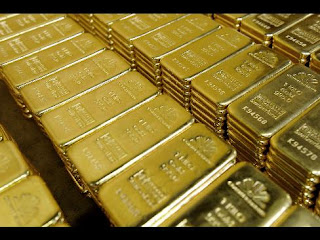 The International Monetary Fund sold 200 metric tons of gold to the Reserve Bank of India for about $6.7 billion, its first such sale in nine years.

The transaction, equivalent to 8 percent of global annual mine production, involved daily sales from Oct. 19-30 at market prices and is in the process of being settled, the IMF said in a statement yesterday. The average price to India, the biggest consumer, was about $1,045 an ounce, an IMF official said on a conference call. Gold for immediate delivery gained 0.2 percent.

“The fall in the U.S. dollar seems to be pushing all the central banks to strengthen their portfolio with gold,” said N.R. Bhanumurthy, professor at the National Institute of Public Finance and Policy in New Delhi. “Gold is a safe store of value compared to the U.S. dollar.” (more)

Best-selling author Daniel Estulin states that the key issue to be discussed this week at the G20 Finance Ministers and Central Bank Governors Meeting, being held in St. Andrews, Scotland, is how to bring down the present world financial system through dumping the US dollar. Estulin first reported on this initiative as being deliberated at the most recent Bilderberg meeting held in Greece in May 2009. Estulin says that the success or failure of this callous plan hinges on the ability of the US and UK representatives to convince the Russian, the Chinese and other national governments to go along with their scheme.

Estulin maintains that if the co-conspirators succeed, such sudden devaluation of the US dollar would result in the sinking of the world economy through a chain-reaction collapse of the entire world’s financial system. As discussed during the Bilderberg Group’s super-secret conclave back in May, this breakdown would then be used as an excuse to launch a new world monetary system. G20 leaders are aware that those who run the monetary markets, the monetary system, control the world. That is why today, the world is run through a dominant one-currency monetary system and not by national credit systems. (more) 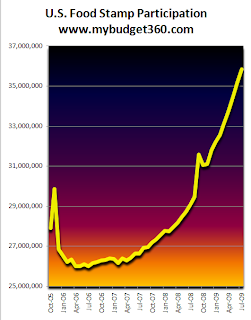 It is a sobering fact that in 2009, there will be as many people filing for bankruptcy as those filing for a divorce. We are on track to seeing an average of nearly 5,900 bankruptcy filings a day for 2009. While some people use the stock market as their barometer of economic recovery, there are a few other “misery” indicators that show things are still bad for millions of Americans and counter the recovery talks. If you want to track a broader recovery, I would recommend people examine the five indicators of the misery index. Food stamps, bankruptcies, long-term unemployed, foreclosures, and credit card defaults are probably your best gauges to the real economic recovery. (more)
at 3:29 AM No comments:

David Tice, the famous stock bear at Federated Investors, predicts that the Standard & Poor’s 500 Index will drop more than 60 percent — to 400.

He told Bloomberg that the recent 60 percent rally has gone too far.

“It’s gotten very overbought,” Tice said. “There’s been a huge shift from negative to positive sentiment. We think a lot of the positive numbers coming out are really not very good underneath.”

As for the S&P 500, “We believe the market won’t bottom until it gets to a 400 level. Will it take three, six, nine months to get there? Probably. The market will generally overshoot fair value.” (more)