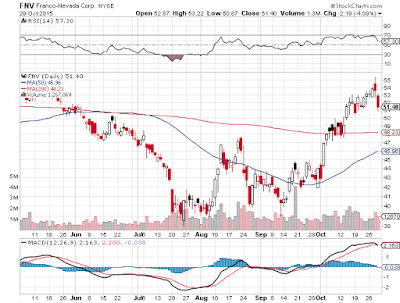 Franco-Nevada (FNV) has made another major streaming deal, using debt for the first time in its history.
The new transaction is a silver stream on the world-class Antamina copper mine. Antamina is the eight largest copper mine in the world and one of the lowest-cost mines in the world
Franco will pay Teck Resources (TCK) $610 million, and in return will receive most of its share of the silver produced from Antamina (starting at 90% and declining to 60% after about 30 years.
The deal is immediately cash flowing and is accretive. It also strengthens and diversifies the portfolio.
On current reserves, the rate of return would be mid-single digits, hardly exciting.
But as Franco notes, they acquire royalties and streams for the upside and fully expect production to grow well beyond current reserves. It is a long-life asset, so Franco expects to participate over several price cycles.
After this transaction, Franco will still have $800 million in available capital. The company has clearly telegraphed that there will be another one or two large transactions.
We think this is a very good deal. It is accretive, it diversifies and strengthens the portfolio, and Franco is buying at a low point in the cycle; finally, this is a world-class asset with a long-life and lots of upside.
Franco sees many opportunities for this type of transaction in the current low commodity price environment. Royalty companies have come a long way from the acquisition of third-party royalties.
The stock has moved strongly from $40 in early September, though it remains below the $60+ level it reached last year.
If you don’t own it already, then buy it here and look for any pullbacks if you are adding to existing positions.
at 12:03 AM No comments: Links to this post

The Probability Of A December Rate Hike Has Never Been Higher

What a difference a word and a day makes...
December odds the highest they have ever been...

Tempur Sealy International, Inc., together with its subsidiaries, develops, manufactures, markets, and distributes bedding products worldwide. It operates through two segments, North America and International. The company provides mattresses, foundations, and adjustable bases, as well as other products comprising pillows and other accessories. It offers its products under the TEMPUR, Tempur-Pedic, Sealy, Sealy Posturepedic, Optimum, and Stearns & Foster brand names. The company sells its products through furniture and bedding retailers, department stores, specialty retailers, and warehouse clubs; e-commerce platforms, company-owned stores, and call centers; and other third party distributors, and hospitality and healthcare customers.
Take a look at the 1-year chart of Vera (NYSE: TPX) below with my added notations: 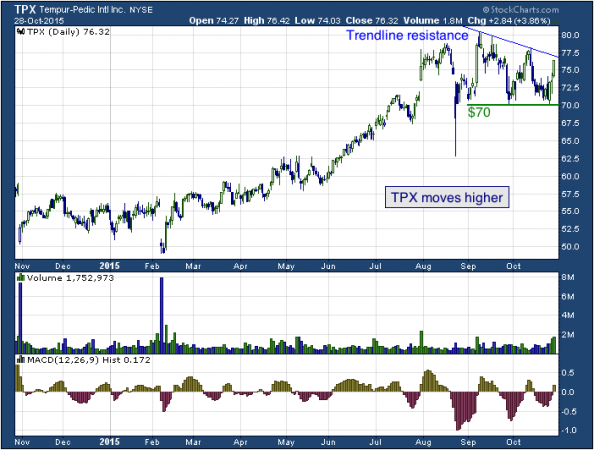 TPX has formed a key support level at $70 (green) over the past two months. In addition, the stock is declining against a short-term, down trending resistance level (blue). These two levels combined have TPX stuck within a common chart pattern known as a descending triangle. Eventually, the stock will have to break one of those two levels.