What investors Should Do With Their Money Right Now

Today one of the wealthiest people in the financial world spoke with King World News about what he is telling the affluent investors and professionals they should be doing with their money at this time. Rick Rule, who is business partners with billionaire Eric Sprott and the CEO of Sprott USA, also takes KWN readers through an interesting set of questions regarding where the future price of gold and silver is headed.
Rule: “This is the time when people need to do some soul searching. Normally when I give a speech people ask me a bunch of questions at the end. But the world is turned upside down, so my talks are turned upside down.
Continue Reading at KingWorldNews.com…

After closing at an all-time high in April, the stock market saw a big sell-off on May 1.
Once again, traders were asking themselves if they should "Sell in May and go away."
This old stock market rule was coined because there is actually some strong historical data to back it up.
Walter Zimmerman, the top technical analyst at United-ICAP, charted the performance of a $10,000 investment in 1950 if you sold in May, and then bought back on November 1.
"The other half of the proverb is ‘Buy Back on Saint Crispin’s Day,’" said Zimmerman.  "That would be 25th October."
"This advice has shined the brightest in those years with the most extreme bullish sentiment going into May."
Check it out: 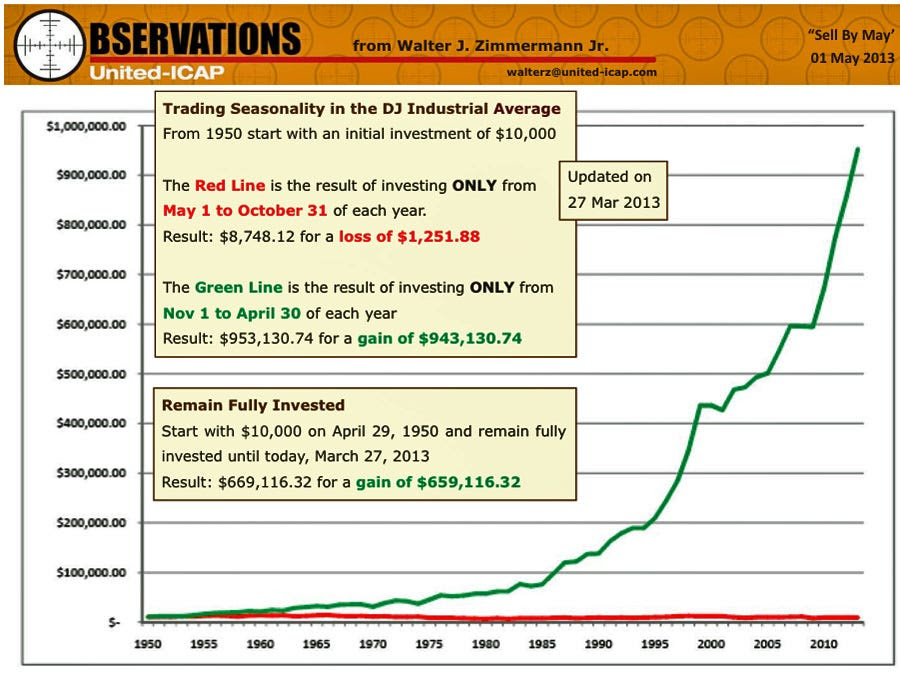 For this weeks edition of the SIA Equity Leaders Weekly, we will focus in on how the USD/CAD currency exchange and the 30-year yield rate are affecting the market.

United States Dollar/Canadian Dollar (USDCAD)
Having last looked at the USD/CAD at the end of February, the USDCAD has had little movement. The black trend lines show the directional channel the USD/CAD has been trading in now for the past year and a half sloping slightly downwards. However, the near-term strength has strengthened to a score of 5 out 10 (from 2, prior) with resistance above at $1.0534 which corresponds with the declining long-term trendline. Further strength may then see the next resistance at $1.0852 come into play. To the downside support is now at 0.9827 and again at 0.9351, the low from 2011.

For some time we have seen U.S. Equities outperforming CAD Equities. If additional strength in the USD shows up this could put additional relative pressure on CAD Equities. Should the channel break to the downside this could see the opposite, and bring some of the CAD dollars moving south of the border back into play with the CAD Equity Market.
Click on Image to Enlarge CBOE Interest Rate 30 -YR (TYX.I)
The CBOE 30-Year Interest Rate moved down strongly in April after a strong move upwards since the middle of 2012 to March 2013. Currently the yield sits against support at 2.847% after breaking through the upwards trendline. If the weakness of the TYX.I continues, as the near-term SMAX score indicates with a score of 4 out of 10, the support level at 2.682% could now come into play.

The Man Who Oversees $65 Billion Discusses Action In Gold

Today legendary value investor Jean-Marie Eveillard, who oversees more than $65 billion, spoke with King World about the recent turbulence in the gold market and what long-term investors should focus going forward in this environment. Below is what the legendary value investor had to say in this exclusive interview.
Eric King: “People are going through a tough time in the gold market. What do you say to them?”
Continue Reading at KingWorldNews.com…

Patterson-UTI Energy, Inc., through its subsidiaries, provides onshore contract drilling services to major and independent oil and natural gas operators in the United States and Canada. The company offers pressure pumping services that consist of well stimulation and cementing for completion of new wells and remedial work on existing wells, as well as hydraulic fracturing, nitrogen, cementing, and acid pumping services in Texas and the Appalachian Basin; and contract drilling services primarily in Texas, New Mexico, Louisiana, Arkansas, Oklahoma, Colorado, Utah, Wyoming, Montana, North Dakota, Nebraska, Alaska, Kansas, Pennsylvania, Ohio, West Virginia, Michigan, and western and northern Canada. It also owns and invests in oil and natural gas assets located primarily in Texas and New Mexico. As of December 31, 2012, it had a drilling fleet of 314 marketable land-based drilling rigs. Patterson-UTI Energy, Inc. was founded in 1978 and is headquartered in Houston, Texas.
Before discussing potential trading opportunities, please take a look at the 1-year chart of PTEN (Patterson-UTI Energy, Inc) below with my added notations: 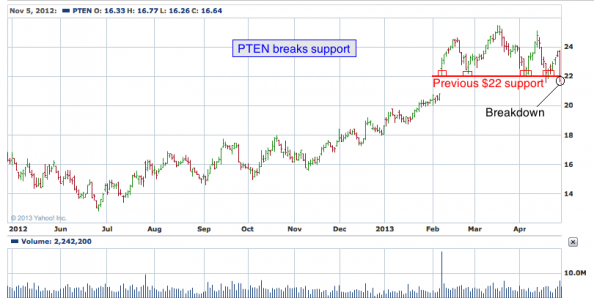 PTEN had been rallying for most of the last year until March. Over the last (3) months the stock has found support at the $22 level (red). Last week the stock broke that $22 support. The breakdown occurred on a slight increase in volume, which should add validity to the breakdown.
The Tale of the Tape: PTEN has broken its support at $22 and the stock has started moving lower. A short position could be entered on any rallies back up near $22 with a stop placed above that level. A break back above $22 would negate the forecast for a move lower.


The bottomline? Economists’ models cannot explain consumer bubbles, tech bubbles or commodity bubbles. Nor can they predict a post-bubble future.

- Stephen Poloz
As is well known, Goldman’s Mark Carney is leaving the Bank of Canada on June 1 to take over the UK money printer in a few months, at which point he will proceed to create about GBP25 billion per month out of thin air, pushing the total monthly G-7 liquidity injection to a healthy $200 billion (an annualized rate of $2.5 trillion). Which meant that a successor had to be found. Moments ago we learned just who that is, and surprisingly it does not appear to be yet another Goldman Sachs Partner, MD or even Vice President. Carney’s replacement is Stephen Poloz, the former head of Export Development Canada.
Promptly upon the announcement Poloz noted that flexible inflation targeting no threat to credibility, and Canada’s monetary policy has helped through crisis, and that experience at EDC gives him a feel for Canada’s economy. If nothing else, at least he has held a real job. Unlike those mandarins in the Marriner Eccles building. Either way, his monetary stance is largely unknown, although it will hardly be a hurdle to the other lunatics who have taken over the money printing asylum.
READ MORE