We had highlighted last week that a lot of reversal patterns were in the works for beta assets. A lot of them were not validated by a follow through the next day, with the exception of precious metals. Still, the picture remains the same: if you buy equities here you buy a market that rallied 25% since July 1, with bullish sentiment at its highest since the Nasdaq bubble, trading anemic volume on the uptick, with the 10-day NYSE TRIN at its lowest since before the 1987 crash, and a put-call ratio telling you no long is hedged. With that in mind some will tell me that I am going to miss an 8% move or something like that. When you start getting worried about missing out on some upside that's exactly when you start thinking like the guy who is going to be left holding the bag. Personally I would gladly miss even 20% to make sure I am not left long when this one bursts. I won't extend too much again into why I think we missed a great opportunity to clean up the system in 2008 and instead set ourselves up for a harsher fall as I fear I might lose my most bullish readers to their brickgame.

In short, a lot of the flashing lights technically that we observed last week are still very worrying for the risk-on theme. (more)
at 12:24 AM No comments: Links to this post

Trade of the Week: Buy Barrick Gold (ABX) on an Expected Pullback 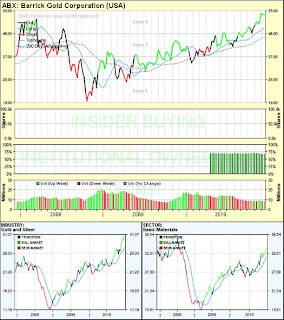 Although my broad market indicators are telling me that the market could end mildly positive, there could be some significant downdrafts if taxes are dramatically raised in the United States, starting the first of the year. Odds are high that the tax situation will remain unchanged, but should Congress be unable to keep the current rates, I suspect many stock market investors will look for ways to pull profits into 2010 at the current tax rates, rather than take the risk of a tax hike on profits in 2011.

If this occurs, we could see a lot more selling than buying in the last few days of this year, which could drive the market substantially lower.

My forecasting model tells me that the near-term low for gold miners should occur this week -- Thursday, to be specific. See the forecast chart for the Gold Miners Index (HUI) below: (more)
at 12:20 AM No comments: Links to this post

China and India may increase imports of coal by 78 percent to 337 million metric tons next year, further driving up prices from the highest in two years and diverting supplies from Europe to Asia.

China may buy 233 million tons more of the fuel than it exports next year, up from net imports of 143 million in 2010, Citigroup Inc. said in a Nov. 29 report. India faces a shortfall of 104 million tons in the 12 months ending March 2012, mjunction Services Ltd., a Kolkata-based commodity trader, said in a note on Dec. 6, citing Coal Minister Sriprakash Jaiswal.

Asia’s two fastest-growing major economies are burning more of the fuel as economic expansion raises demand for electricity. The International Monetary Fund forecasts that China’s gross domestic product will next year expand 9.6 percent and India 8.4 percent. China added about 51 gigawatts of coal-fired capacity last year, more than half the total capacity of the U.K., according to data from Daiwa Capital Markets and the U.S. Energy Department.

“All the indications are for increased demand in 2011,” Andrew Harrington, an analyst at Patersons Securities Ltd. in Sydney, said in a Dec. 9 interview. “China has become much more important especially because of the expectations that they will be unable to meet their own needs from domestic supply.” (more)
at 12:17 AM No comments: Links to this post 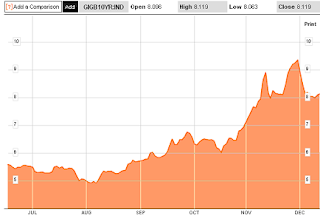 As a result of our Federal Government’s inability to cut spending while at the same time extending Bush era tax cuts, our country’s debt is in danger of being downgraded from its triple-A rating.

What it means: future bond rates will necessarily have to go higher. You don’t get to keep selling low-yield debt when your ability to pay it back is universally recognized as not-quite-prime.

Don’t get me wrong: I’m not saying that we should raise taxes. But I am saying that you can’t cut taxes unless you’re prepared to cut expenses. If that seems like an extreme position, then I take that as good news for my gold and silver holdings.

If our elected leaders didn’t see this potential downgrade coming, they should resign in disgrace. They’re simply not fit to govern if they don’t understand that planned-deficit spending has real world consequences. (more)

Top-performing stocks from the past six months are likely to do well over the next six months, too. That's particularly true of shares that are hitting new highs.

Value investors might cringe at that logic, but momentum-based trading strategies have been the subject of extensive research. A study published in the Journal of Finance in 2004 compared a handful of such strategies using returns for U.S. stocks from 1963 to 2001. Each was a "long/short" strategy designed to isolate the predictive ability of a single variable. One strategy mimicked buying shares that had been top gainers over the past six months while selling short (or betting against) those that had been top losers. If price momentum showed no predictive ability, the buys and sells would have offset each other for a net return of zero. Instead, returns averaged nearly 0.38% a month (or 4.6%, annualized), but began to fizzle after six months. (more)

Chart of the Day: Tax Receipts, Spending and Debt 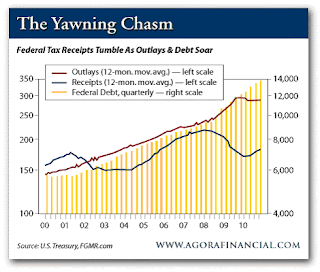 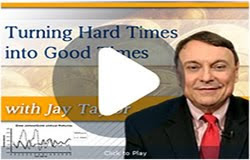 The Chinese National Bureau of Statistics announced on Saturday, China's inflation has soared to a 28-month high. The consumer price index rose by 5.1 % year-on-year in November.

Food was the biggest concern, with prices rising 11.7 %. Economists say inflation could be spreading to other sectors, with health care up 4 % and house prices up 5.8 %.

Economists blame massive lending and billions of stimulus spending in reaction to the financial crisis. (more)
at 12:13 AM No comments: Links to this post

Investing In Farmland: Is Farmland In An Asset Bubble? 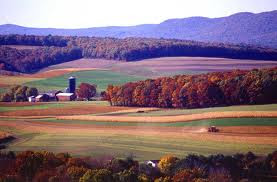 The surging farmland values caught the attention of FDIC chair Sheila Bair. She said farmland could be the next asset bubble at risk of bursting.

Her revelation isn’t surprising given the impressive gains and the recent history in the residential and commercial real estate markets. But I think she missed the mark on this one.

I believe farmland is the ideal diversification asset for investors.

Simply put, it’s a better hedge against inflation than gold. It generates more income than government bonds. And if the “you-know-what” really hits the fan, you can still live off the land.

But doomsday theories aside, farmland is still a very attractive investment.

4% isn’t huge but it still knocks the socks off what you’ll get from a bank CD or government bond. And price appreciation will protect your investment when inflation rears its ugly head.

But the fact remains… price appreciation has outpaced inflation by 58% since 2000. Does it mean farmland prices are getting bubbly? Not by a long shot! (more)
at 12:11 AM No comments: Links to this post

Canada’s top economic officials yesterday urged households to be wary of taking on too much debt after data showed the indebtedness of Canadians surpassed U.S. levels for the first time in 12 years.

Bank of Canada Governor Mark Carney, Finance Minister Jim Flaherty and Prime Minister Stephen Harper said in separate public appearances that they are concerned about rising debt. The ratio of household debt to disposable income in Canada was 1.48 in the third quarter according to Statistics Canada, exceeding the U.S. level of 1.47.

“Our parents were more inclined to pay off that mortgage as soon as possible, and some Canadians are not as inclined to do that now,” Flaherty told reporters yesterday. “I encourage them to do it.”

The comments by the policy makers underscore government concern that debt levels in Canada could threaten the recovery if borrowing costs rise and households struggle to pay their bills. Canada has relied on regulatory steps to rein in mortgage borrowing, most recently in February, and Flaherty said yesterday he is prepared to take additional measures if needed. (more)