How a Bursting Housing Bubble in China Could Slam the U.S.

China's housing crisis is much worse than the one in the U.S., according to a Chinese government minister, and given the scale of its pumped-up real estate bubble, suddenly deflating it could have global consequences.

The worst consequence of a burst housing bubble might be a huge spike in interest rates. But fear of an even bigger force -- Chinese citizens' anger at the high cost of real estate -- could tame China's efforts to constrain the housing market. (more)

It's been 37 days since BP's offshore oil rig, Deepwater Horizon, exploded in the Gulf of Mexico. Since then, crude oil has been hemorrhaging into ocean waters and wreaking unknown havoc on our ecosystem -- unknown because there is no accurate estimate of how many barrels of oil are contaminating the Gulf.
Though BP officially admits to only a few thousand barrels spilled each day, expert estimates peg the damage at 60,000 barrels or over 2.5 million gallons daily. (Perhaps we'd know more if BP hadn't barred independent engineers from inspecting the breach.) Measures to quell the gusher have proved lackluster at best, and unlike the country's last big oil spill -- Exxon-Valdez in 1989 -- the oil is coming from the ground, not a tanker, so we have no idea how much more oil could continue to pollute the Gulf's waters. (more)
at 12:50 AM No comments:

David Rosenberg: S&P Will Plunge to 850 as Growth Slows

The good news: Earnings have been rising while the market has been correcting, which has helped cut the degree of overvaluation in half.

The bad news: the ECRI leading economic index foreshadows a deceleration in real GDP growth, to 1.5 percent in the second half of the year from the 3.75 percent average pace since the recession technically appeared to have ended around mid-2009. Because of that, the S&P 500 Index may fall more than 20 percent.

"The S&P 500 level that would be consistent with that sort of pace would be closer to 850 than the current level" of about 1,100, Rosenberg wrote in a note to investors.

Add investment legend Warren Buffett to the list of those who warn of a municipal debt meltdown.

Many municipalities have promised overly generous retirement and health benefits to public workers without any viable plans to bring in the money necessary to pay for those benefits. 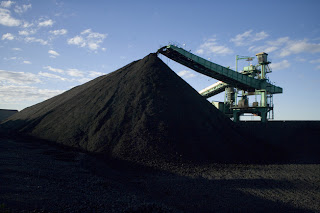 Most Asian stocks fell, led by mining companies, after the world’s two largest copper producers warned of lower demand for the metal because of China’s plans to curb its economy. Energy companies and automakers rose. 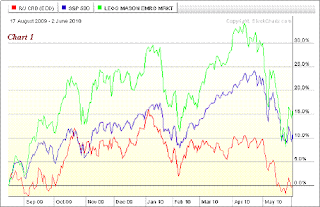 Deutsche Bank AG recently noted that commodities will continue to “struggle” as the dollar strengthens and China seeks to restrain growth. Looking at the recent performance between the CRB index, S&P 500 and Legg Mason Emerging Market [LGEMX] would certainly seem to support Deutsche’s view.
(more)
at 12:05 AM No comments:

The WSJ's Hit Piece On Gold

The WSJ issues an amusing hit piece on why gold is nothing but a "Ponzi Scheme", ignoring the fact that by its definition the stock market is precisely the very same. Either way, since we are seeing no let up in the currency debasement department of Central Banks, and gold continuing to trade near record highs, it is a good thing to occasionally have a shake out of the weak hands. After all it will merely provide far better entry prices for countries like Russia, which as we disclosed recently, have been buying up all the IMF has to sell in the open market. At the end of the day - the opinion of Brett Arends or of David Einhorn, David Rosenberg, Jim Rickards, Eric Sprott, and, oh yeah, John Paulson.

Some philosophical snippets from the WSJ hit piece. No commentary necessary: (more)

Folks who panicked and dumped their positions on Tuesday after BP conceded the “top kill” effort in the Gulf of Mexico had failed? They missed out big-time yesterday.

Consider the case of the OSX -- the Philadelphia Oil Service Index, comprising 15 companies, three of them tied directly to the spill. After an end-of-the-world 7.5% plunge on Tuesday, the OSX rallied 5.5% yesterday. Within some of the index’s components, the market action bordered on the absurd.

Halliburton, for instance, issued a statement that said, To heck with Obama and his six-month ban on deep-water drilling. We’ll just move our people and equipment to other places where they’ll be welcome.

Of course, anyone who casually follows the sector already knows Halliburton has no shortage of business. But the statement was enough to pump up HAL stock 12% in a day.

Such is life when the overall market exhibits signs of the bipolar disorder we diagnosed last week. Yes, the sector is still pretty beaten up compared to before the Deepwater Horizon disaster -- which nearly coincided with the overall market’s top in late April.

So where from here?