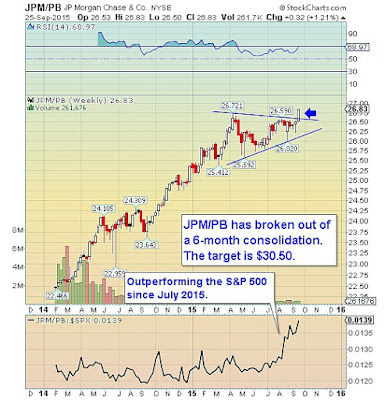 Technicals:
Recently broke out of a 6-month triangle consolidation
New 52-week High
New all-time high
Buying momentum (RSI) is positive and advancing
Buying volume is neutral
The stock has been outperforming the benchmark S&P 500 since July 2015
Support is at $26.60

Note: If JPM/PB moves past the target, we suggest using a 3% trailing stop.
at 12:03 AM No comments: Links to this post 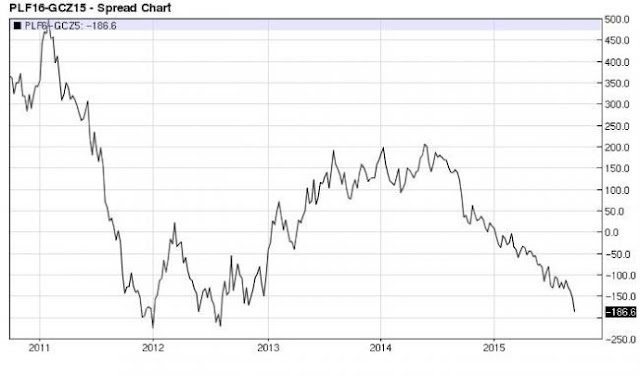 This week platinum prices moved to new lows that we haven’t seen for seven years.  Both technical traders and fundamentalists had reason to sell, as we broke through long term support levels and several news stories are working against the metal.  Gold futures meanwhile, continue to trade favorably and outperform the other metal markets.  The divergence between these two metals has created an opportunity in the relative price of each contract.  (more)
at 12:03 AM No comments: Links to this post

The biotech sector garnered headlines as it plunged this week, but big pharmaceuticals stocks were hit just as hard. Most have similar patterns to the broader market indices. In other words, they have renewed their downside breaks.
Bristol-Myers Squibb (NYSE: BMY) was one drug stock that bucked the trend in September with a much stronger rebound than its peers following the broader market's breakdown in late August. While the pharmaceutical sector index formed a rising wedge pattern, which is typically bearish, from its late August lows, BMY scooted sharply higher. 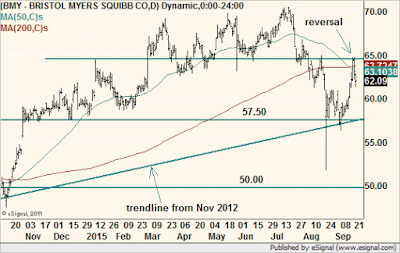 The stock even managed to poke its head above both its 50-day and 200-day moving averages. Considering the total breakdown across most sectors of the market, that was rather impressive.
But the good times ended abruptly with a bearish reversal on Sept. 21, the day presidential candidate Hillary Clinton tweeted she would release a plan to tackle rising drug prices the next day.

Still, I believe the real driver for the decline was overall weakness as many market and sector indices broke down.
Regardless, this bearish reversal ended BMY's defiance of its sector's foibles on the charts. The stock could not hold above its major moving averages. As prices hit resistance set by the ragged bottom of the mid-2015 trading range, the bears took over.
The next downside stop is the $57.50 area, not far below current trading. This marks the November and December lows, as well as the twin highs from January and March of 2014 (not shown on the chart), setting a nice floor for the stock. The rising trendline from November 2012 will also be in this area within a day or so. Recall that the broader market started a multimonth rally in November 2012, so this trendline is rather important.
Should this support level fail to hold -- and given the overall weakness in the market it seems quite likely that it will -- the downside objective would be much lower. A breakdown would target the trendline from the start of the bull market in 2008 in the $50 area. There is also horizontal chart support there from the trading range seen late last year.