From a ‘30 year cycle’ point of view, corn is starting to look very interesting.  While it could still take several weeks to see if corn will bottom above the 360 price level,  this is a market that could offer a low risk/high reward trading opportunity if the October 2015 corn pattern continues ‘shadowing’ the October 1985 corn pattern.  As highlighted on the first chart below, corn bottomed in October 1985 and then rallied into December 1985:
December 1985 daily corn chart

December 1985 corn futures reached an initial low on Sept 4  that was tested the following week.  As the chart shows, following the re-test of the Sept 4 low corn rallied and - over the next two weeks - was able to trade back up above the 10 and 13 day EMA’s.  Also noteworthy is at that time corn was bottoming,  the 10 and 13 day EMA’s (red/green lines) were positioned below the 55 day EMA (blue line) and corn was trading below all three EMA’s.(more)
at 12:03 AM No comments: Links to this post

The Stock Market $NYSE is Overbought

The stock market is even more overbought today than it was last week.
Over the past two weeks, we saw the S&P 500 rally as much as 7.5%. That's a remarkable move. And the proverbial rubber band is now stretched far to the upside.
It can stretch further. Overbought conditions can get even more overbought.
But the odds are against it...
Too many technical indicators are now at levels that often coincide with a short-term top in the stock market.
For example, take a look at the charts below. They show the McClellan Oscillators for the New York Stock Exchange (NYSE) and the Nasdaq at Friday's close... 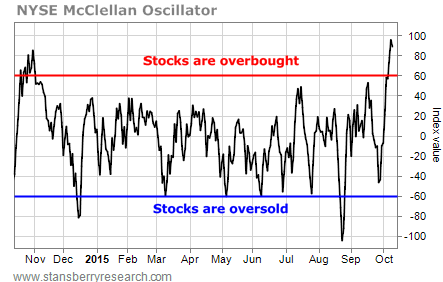 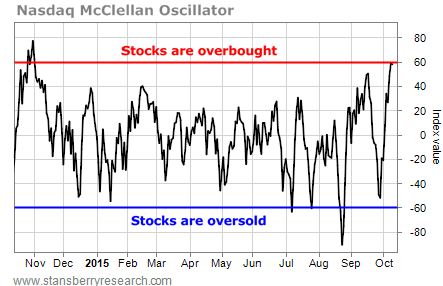 The McClellan Oscillator is an indicator of overbought and oversold conditions. It's generally considered to be oversold when it falls to less than -60. It's overbought when it rallies to more than 60.
As you can see from the charts, both the NYSE and the Nasdaq McClellan Oscillators closed Friday at the most overbought readings of the year.
And the Volatility Index (VIX), a contrary measure of investor sentiment, has collapsed from where it was a few weeks ago... 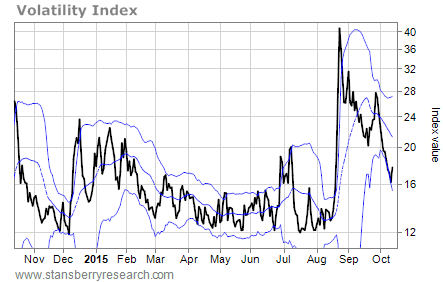 The VIX closed Monday at 16.17 – just a fraction higher than its lower Bollinger Band. This represents an extreme move to the downside.
The VIX often rallies off of this sort of oversold condition. And a strong rally in the VIX is usually accompanied by a strong decline in the broad stock market.
The stock market has held up well since I turned cautious on it last week. But with so many technical indicators at levels that often precede a broad stock market decline, it's hard to argue that the market is headed even higher in the near term.
Traders need to be cautious here. Tighten your stops. Trim your profits. And brace yourself for a big move to the downside.
at 12:03 AM No comments: Links to this post Our technical model is showing the completion of a downside capitulation signal for silver prices, indicating that a significant long term bottom is either already in place or will be finalized over the next several weeks across the silver market. Whether or not we see additional short-term weakness to the extent of a few dollars per ounce, the emergence from this pattern will represent a long term silver buy signal of similar magnitude to the one that occurred in November 2008, which saw silver rise over 400% within 2.5 years. Over the same timespan, certain silver miners saw gains well in excess of 1,000%.

We remain optimistic on silver due to fundamental supply/demand metrics, which include significant uptrends in investor demand since 2005 amidst mostly inelastic and stable industrial and jewelry demand. Such will be the topic for another article; in this feature, we focus on the technical side of the market and begin with an examination of our most important indicator: the relative strength ratio of the company Silver Wheaton (SLW) to silver bullion. (more)
at 12:03 AM No comments: Links to this post