U.S. dollar will "get a lot stronger than anyone can imagine": John Mauldin


The U.S. dollar is on a roll. The dollar index, which measures its value versus a basket of other world currencies, is at a four-year high. John Mauldin, best-selling author and chairman of Mauldin Economics says, get used to it.

Mauldin believes the dollar is going to keep rising and “get a lot stronger than anyone can imagine.” He says, “We are going to be trading stronger against nearly every currency.“
In other parts of the world, currencies are slipping as the U.S. dollar strengthens. Central banks in Europe and Japan are shifting policies to fight slowing growth and fend off deflation. Last month, the Bank of Japan boosted its quantitative easing strategy, and the yen fell to a seven-year low against the dollar on the news. The European Central Bank is expected to start its own QE program.

Even currencies in emerging markets are struggling against the dollar. In Russia, the ruble is being beaten down by slower growth and economic sanctions against the nation. Currencies of other major emerging markets like India and Indonesia are still trying to claw back after sharp declines following the announcement of the end of quantitative easing in the U.S. last year.

On Monday, the president of the Boston Federal Reserve bank, Eric Rosengren, said the rise of the dollar against world currencies is a sign of how strong the U.S. economy is and doesn't indicate a currency war is developing. "Various economies are in very different positions," Rosengren said.

Mauldin says the rise of the dollar puts the Fed in a more difficult place as far as raising rates. One of the problems of a stronger dollar is that it creates a deflationary environment. Deflation hurts the economy by encouraging a delay in spending if the assumption is that prices will be lower in the future. The Federal Reserve wants inflation and has a target of 2%. But the Fed isn't getting any closer to meeting its inflation target.
Of course, anyone who is heavily invested in gold wants inflation to rise too. The dollar’s strength isn’t good for the precious metal. Gold is bouncing along four-year lows. But Mauldin calls it “central bank insurance.”

Jim Rickards joins us live from Nashville, TN.
Porter was away at our Alliance meeting in the Dominican Republic this week and so I got to go into our paid content file and pick something very special for you.

I picked something extraordinary...

It's amazing how much Jim can pack into a 30 minute speech – recession, depression, inflation, monetary policy, and the Fed.

Sit back in your favorite chair, grab a beverage, close your eyes, and listen. (click here)
Please share this article
at 12:04 AM No comments:

Lululemon Athletica (NASDAQ: LULU) Less Than $1 Away From a Breakout Buy Signal 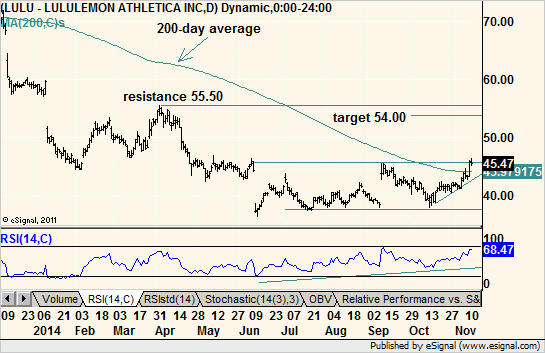 When most of us think of Lululemon Athletica (NASDAQ: LULU), we think about see-through yoga pants and a big product recall to remedy it.
But the drop suffered in the stock price in March 2013, when that news broke, is nothing compared to the pounding the shares have taken in the past year and a half on a series of bad news and disappointing earnings guidance.

The good news is that since the latest beating, which stemmed from a lowered earnings outlook released in June, the stock has actually been moving sideways for many months.(more)
Please share this article
at 12:04 AM No comments: 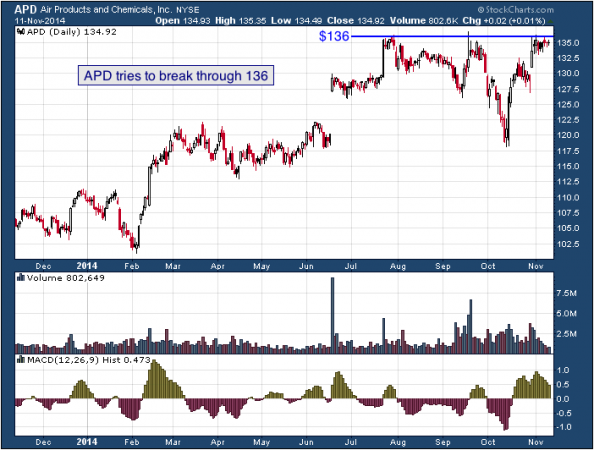 APD rallied from February into July before finally stalling at $136. The stock reached that $136 mark again in September only to sell back off. APD is now testing the $136 level once more (blue) and may be looking to finally break through. A close above that resistance would also constitute a new 52-week high.

The Tale of the Tape: APD has a 52-week resistance at $136. The possible long position for APD would be on a breakout above $136.
Please share this article
at 12:04 AM No comments:

Republican control of the U.S. Senate has made approval of the Keystone pipeline imminent.
The controversial $8 billion project, skillfully delayed for years by U.S. President Barack Obama, would transport oil sands crude from Canada to refineries on the U.S. Gulf Coast.
TransCanada Corp. (NYSE: TRP), the company building the Keystone XL pipeline, would be the greatest beneficiary of its approval, of course. But dozens of other companies also figure to gain from the project.
With the Democrats soon to be the minority party in the Senate, Majority Leader Harry Reid, D-Nev., will lose his power to block voting on Keystone XL pipeline bills, as he has done for years. (more)

Overall gold and silver mining stocks are now entering a key long term investment level, but don’t jump the gun and buy yet…
Knowing that most of the largest moves based on percent happen during the last 10% of the trend, we must expect micro-cap stock prices will be extremely volatile for many months. Another 30-60% hair cut could still be ahead. 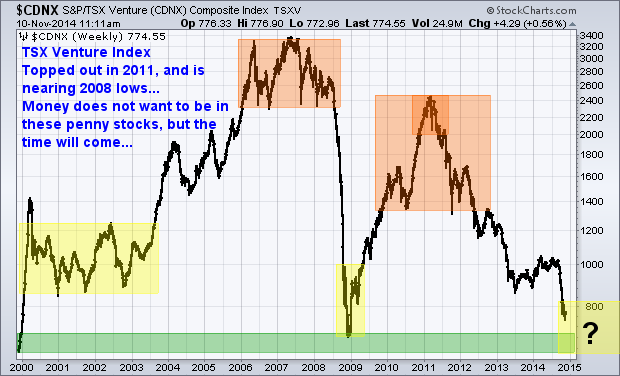 The TSX Composite is heavily resource-weighted and this market has lagged its counterparts around the world in the last year. This year the Canadian index played catch-up as seen in the chart below and was the strongest index in 2014 until this recent correction.
These equities may hold up well when the US market starts to top/correct. This is because the TSX’s is heavily weighted in late-cycle stocks (resources), it’s not unusual for the Canadian market to lag in the early stages of a bull market in the USA, catch up in the late stages, and then outperform toward the end.

In short, I think 2015 will be the start of a new micro-cap stock bull market. Sure it could take more than a year to base and start to rally, but the time will come when ridiculous amounts of money will be made in this corner of the market.
We all hear stories about how a couple thousand dollars in a particular stock would now be worth $250,000, $1,000,000 etc… well times like that will happen again. But we must wait and watch for this perfect storm to unfold.
Starting in Dec/Jan I will start sharing my top 12 micro gold and silver stocks along with my trades/positions in them as I take them.
Please share this article
at 12:04 AM No comments: 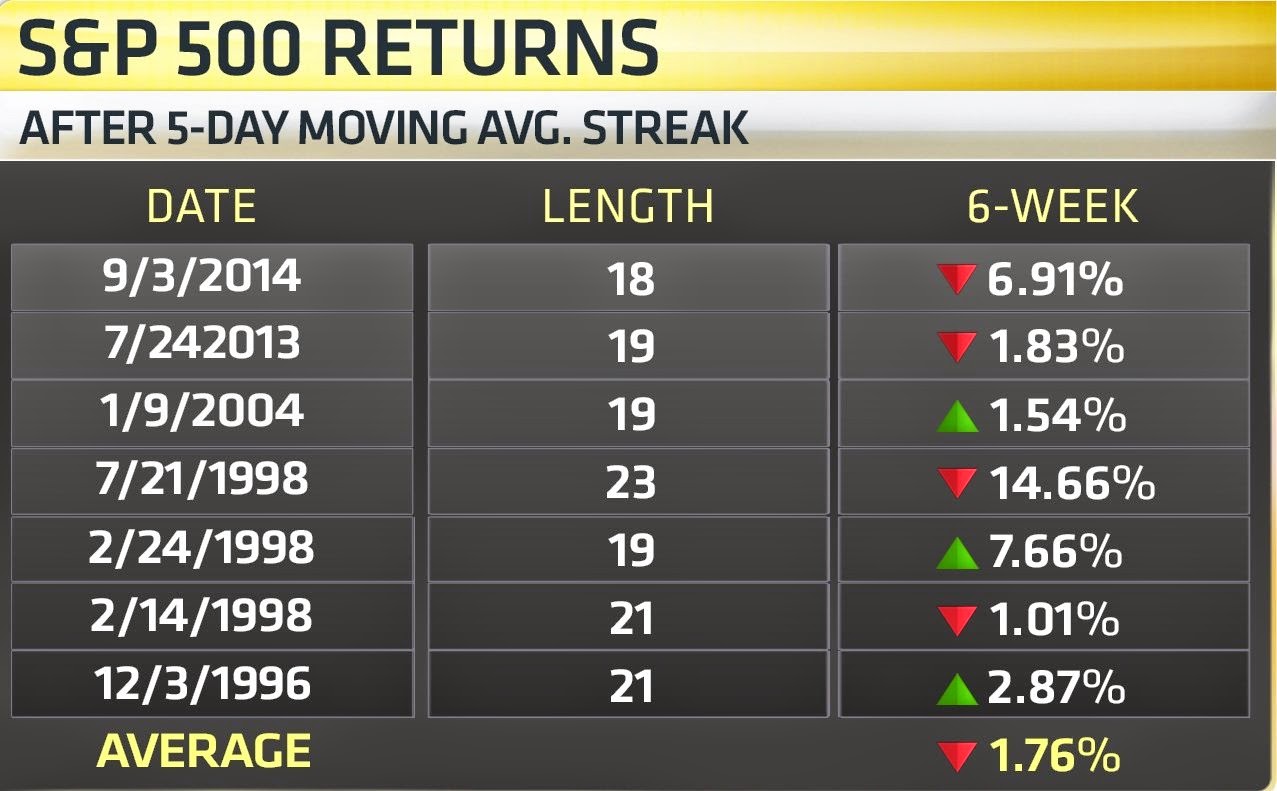 Something rare and potentially very dangerous is happening in the market right now. And if history is any indication, it could spell short-term pain.

The S&P 500 has closed above its five-day moving average for 20 consecutive days. That has only happened just three times before in the last two decades.

Now, here’s the sad part: Four weeks after each of one those streaks came to an end, the S&P 500 was down, for an average loss of 3 percent. That’s according to a recent study by Jonathan Krinsky, chief market technician at MKM Partners.

What’s more, the S&P 500 has had just seven prior streaks above its five-day moving average lasting 18 days or more. And those, too, also averaged losses four and six weeks after ending.

Does that mean there will be bad news for stocks soon?

And because the five-day moving average is such a short-term indicator, the fact that the S&P 500 has remained above it for four weeks makes the rally so remarkable and unusual, he said.

But with Thursday’s close at 2,039.33, the S&P 500 is extremely close to hitting an important level, according to Krinsky. “We’re pushing against a pretty good area of resistance around 2,040,” he said.

If that resistance holds, he foresees the index returning toward an area between 1,970 and 1,980, roughly 3 percent lower from current prices.

That’s not enough to worry Krinsky, however. “Nothing too concerning,” he said. “But risk/reward from this level seems to favor the downside.”
Please share this article
at 12:03 AM No comments: 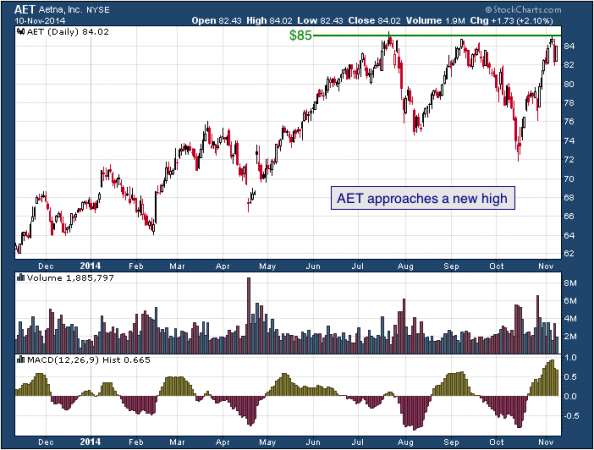 After running up to $85 in July, AET pulled back sharply into August. The stock followed that pullback with another run up to $85, and again, pulled back even further. The stock has now tested the $85 level again (green), and may be looking to finally break thru that $85 resistance. That break would also constitute a new 52-week high.

The Tale of the Tape: AET has a 52-week resistance at $85. The possible long position for AET would be on a breakout above $85.
Please share this article
at 12:03 AM No comments: