Phillips 66 operates as an independent downstream energy company. The company operates in three segments: Refining and Marketing (R&M), Midstream, and Chemicals. The R&M segment purchases, refines, markets, and transports crude oil and petroleum products, such as gasolines, distillates, and aviation fuels primarily in the United States, Europe, and Asia. This segment also engages in the power generation operations. The Midstream segment gathers, processes, transports, and markets natural gas; and transports, fractionates, and markets natural gas liquids in the United States. This segment markets residue gas to electric utilities, industrial users, and gas marketing companies. The Chemicals segment manufactures and markets petrochemicals and plastics. This segment produces and markets ethylene, propylene, and other olefin products; and aromatics products, such as benzene, styrene, paraxylene and cyclohexane, as well as polystyrene and styrene-butadiene copolymers.
To review Phillips' stock, please take a look at the 1-year chart of PSX (Phillips 66) below with my added notations: 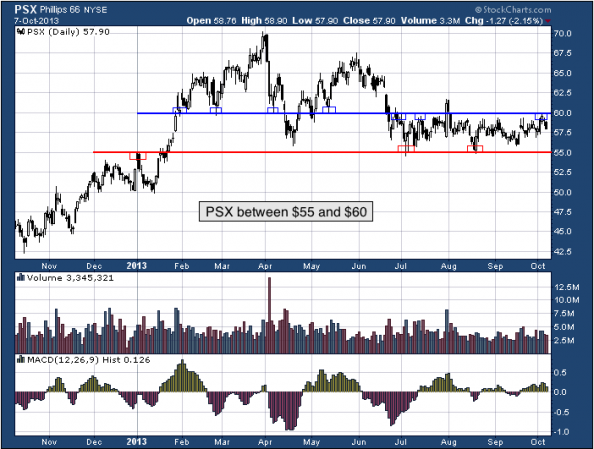 The Tale of the Tape: PSX has formed a rectangle pattern. The possible long positions on the stock would be either on a pullback to $55, or on a breakout above $60. The ideal short opportunities would be on a break below $55 or at $60.
Please share this article
at 12:06 AM No comments:

Gas Prices Could Dip Below $3 by Year-End

According to David Lutz of Stifel, Nicolaus & Company, consumers are going to get a big boost to their wallets before the end of the year — and the source could surprise you.

According to Lutz, the Environmental Protection Agency (EPA) is about to make some long-overdue adjustments to the federal ethanol mandate that's been acting as a stealth tax on American drivers for years. The result could push the national average price for a gallon of gas lower than anything we've seen since the depths of the Great Recession.

First, a word on how we got here. As Lutz explained last summer, the 2005 Clean Air Act mandated that refiners blend ever rising amounts of ethanol into gasoline. As long as U.S. gas consumption was rising, meeting the ethanol blend requirement was arguably misguided but no more so than other economic policies with unintended consequences.
What neither the EPA nor anyone else saw coming was the drop in demand for gas. Were the U.S. Energy Information Administration's website not down as part of the government shutdown, this link would show that gas demand hasn't been this low in over a decade. (more)

HARRY DENT ~ How to Profit from The Downturn & Secure the Future

Charles River Laboratories International, Inc., together with its subsidiaries, provides research models and associated services, and outsourced preclinical services to accelerate the drug discovery and development process. It operates in two segments, Research Models and Services (RMS), and Preclinical Services (PCS). The RMS segment is involved in the production and sale of research model strains, principally genetically and microbiologically defined purpose-bred rats and mice for use by researchers. The PCS segment provides preclinical services, including both in vivo and in vitro studies, supportive laboratory services, and strategic preclinical consulting and program management to support product development.
To review Charles' stock, please take a look at the 1-year chart of CRL (Charles River Laboratories International, Inc.) below with my added notations: 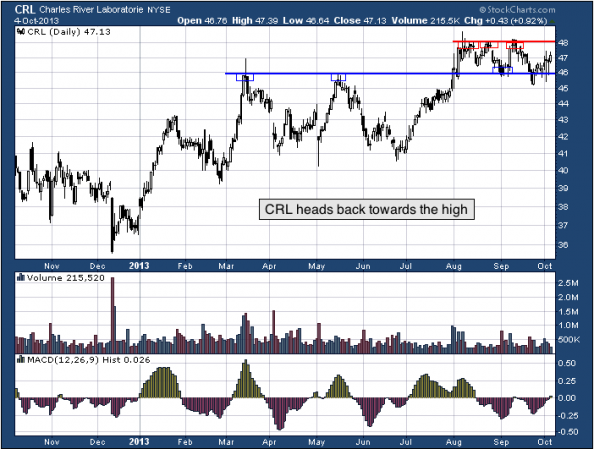 Since December of last year CRL has grinded its way higher. Over the last 7 months though, the stock has formed a key level of $46 (blue) and an area of resistance at $48 (red). That resistance is also a 52-week high resistance. After a brief, fake, breakdown last month, the stock appears to be headed back up towards its $48 resistance.

The Tale of the Tape: CRL has a $46 level of support and a $48 resistance to watch. A long trade could be made on either a pullback down to $46, or on a break above $48. A break below $46 would be a great time to consider a short trade.
Please share this article
at 12:03 AM No comments:

Social Security is a key component of people's retirement income. But millions of Americans who rely on the program don't know everything they should about Social Security.

In the following video, Dan Caplinger, the Fool's director of investment planning, runs through three essential aspects of Social Security. Dan begins by describing the fact that Social Security's benefits are progressive, giving those with low average earnings a bigger percentage of their pre-retirement income than higher-income earners. In addition, he discusses how some people aren't eligible for Social Security. Finally, Dan looks at the Social Security Trust Fund, noting that unlike investors in the iShares Barclays 20+ Year Treasury ETF (NYSEMKT: TLT  ) or iShares Barclays TIPS Bond ETF (NYSEMKT: TIP  ) , Social Security doesn't lose money on the bonds it holds when rates rise and could actually benefit from higher rates in the long run.

Why Social Security is so important for you

Don't stop with these simple facts. Get the whole picture behind what makes Social Security tick and be smarter about your retirement. In our brand-new free report, "Make Social Security Work Harder For You," our retirement experts give their insight on making the key decisions that will help ensure a more comfortable retirement for you and your family. Click here to get your copy today.

These Stocks Should Benefit From ‘Obamacare’ 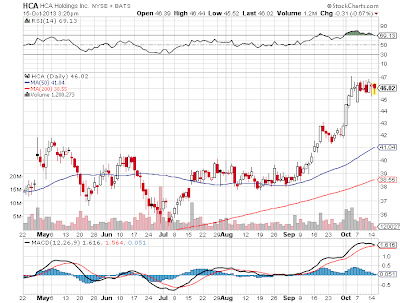 The Affordable Health Care Act for America – better known as “Obamacare” – is the biggest change to our health care system since the launch of Medicare and Medicaid in 1965.

And it’s at the heart of the current government shutdown . . .

Regardless of whether you support Obamacare, the transformation of health care presents both profit opportunities and potential pitfalls.  (more)