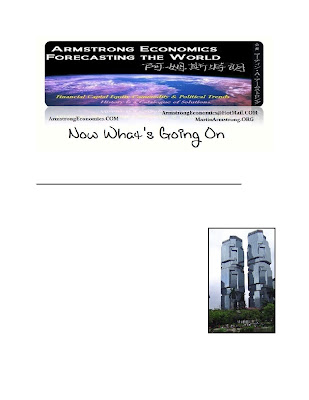 Dr. Copper Gets a New Specialty 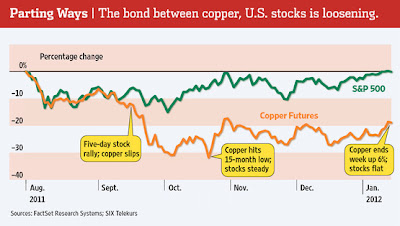 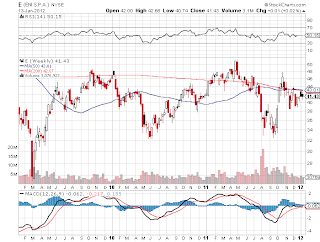 Until the bond markets signal “all clear” and the spreads between the bonds of Europe’s problem children and German bunds shrinks to something more manageable, I expect European stocks to be volatile.

But volatility by itself is nothing to fear. If you buy the right companies at the right prices, volatility is not really a form of “risk” but instead a well-presented opportunity. And I believe that Europe is ripe with such opportunities today. My investment rationale can be summarized as follows:

In each of the years 2008, 2009 and 2010, significant worries emerged that Western nations might attack Iran. Here in 2012, similar concerns are once again at the surface.

Why revisit this topic again? Simply because if actions against Iran trigger a shutdown of the Strait of Hormuz, through which 40% of the world’s daily seaborne oil passes, oil prices will spike, the world’s teetering economy will slump and the arrival of the next financial emergency will be hastened. Even if the strait remains open but Iran is blocked from being an oil exporter for a period of time, it bears mentioning that Iran is the third-largest exporter of oil in the world after Saudi Arabia and Russia.

Once again, I am deeply confused as to the timing of the perception of an Iranian threat, right now at this critical moment of economic weakness. The very last thing the world economies need is a vastly increased price for oil, which is precisely what a war with Iran would deliver.

Let me back up. The U.S. has already committed acts of war against Iran, though no formal declaration of war has yet been made. At least if Iran had violated U.S. airspace with stealth drones — and then signed into law the equivalent of the recent U.S. bill that will freeze any and all financial institutions that deal with Iran out of U.S. financial markets — we could be quite confident that these would be perceived as acts of war against the U.S. by Iran.

And rightly so. From Reuters:

“The sanctions target both private and government-controlled banks — including central banks – and would take hold after a two-six-month warning period, depending on the transactions, a senior Obama administration official said.

Sanctioned institutions would be frozen out of U.S. financial markets.”

The impact of this law was quite pronounced and immediate, with the Iranian rial falling sharply against the dollar in the first few days after the bill was signed into law. As reported in Reuters:

“(Reuters) - The Iranian rial fell to a record low against the dollar on Tuesday following U.S. President Barack Obama signing a bill on imposing fresh sanctions against the country’s central bank.

“The exchange rate hovered at 17,200 rials to the dollar, marking a record low. The currency was trading at about 10,500 rials to the U.S. dollar last month. Some exchange offices in Tehran, when contacted by Reuters, said there was no trading taking place until further notice.

“‘The rate is changing every second…we are not taking in any rials to change to dollar or any other foreign currency,’ said Hamid Bakhshi in central Tehran.” (more)

The "Chart of the Day" is Wyndham Worldwide (WYN), which showed up on Thursday's Barchart "All Time High" list. Wyndham on Thursday posted a new all-time high of $39.59 and closed up 1.39%. TrendSpotter has been Long since Dec 20 at $35.97. In recent news on the stock, Jefferies on Nov 22 initiated coverage on Wyndham with a Buy and a target of $49. Susquehanna on Oct 27 reiterated its Positive rating and raised its target to $42 from $39. Wyndham Worldwide, with a market cap of $6 billion, operates in the lodging, vacation exchange and rentals, and vacation ownership segments of the hospitality industry.

The conditions that led to the birth of Occupy Wall Street are very similar to those before the Great Depression, says former Goldman Sachs Group Inc. (GS) managing director Nomi Prins.

Prins is the author of “Black Tuesday,” a novel set in 1929 and ‘30 in which the heroine accidentally discovers dark secrets at the nation’s largest bank. Prins has also written three nonfiction books, including “It Takes a Pillage: Behind the Bailouts, Bonuses and Backroom Deals From Washington to Wall Street” (2009).

In an interview at Bloomberg world headquarters in New York, we discussed the past and future of the financial system and the mistakes policy makers are repeating.

Onaran: Why did you go for fiction this time?

This Undervalued Retailer has +20%-Plus Potential: FDO

When Family Dollar Stores (NYSE: FDO) announced earnings on January 6th which merely met analysts revenue and earnings estimates, their shares were savaged. Disappointed shareholders knocked $3.50 off the share price pushing the stock to technical support around $53.70, near the 50-week moving average.

Shareholders' reaction to the announcement has created a big opportunity for traders for several reasons...

There are currently 7,120 Family Dollar Stores across the U.S. In 2012, the company plans to open between 450 to 500 new stores, while closing 80 to 100 less-profitable locations. By increasing its store presence, the company should continue tapping into a growing customer base hungry for low-priced items.

From a technical perspective, Family Dollar Stores shares are off nearly $7 from their peak. The small white harami candle which formed this January 9th treading week suggests the majority of the selling pressure was experienced on the day and immediately after the earnings release and that bargain hunters are moving back into the stock at current levels.

From October 2012 until recently, the stock traded in a narrow range between $55 support and $60.34 resistance. This trading activity formed a rectangle consolidation pattern.

On last Friday's earnings news, the rectangle resolved bearishly. Support at $55 was breached and the stock plummeted approximately 6%, from an intraday high of $56.50 to an intraday low of $53.03. Shares tested major support, marked by both the Major uptrend line -- which intersects around $53.80 -- and the 50-day moving average.

This January 9th trading week, shares have held $53 support. So long as the stock doesn't buckle, shares should slowly continue to regain lost ground. If the stock can successfully challenge $55 -- the previous support and current resistance level - it could climb back to its $60 high.

As a result, I recommend that more risk-averse traders enter the position with caution by setting a buy-on-stop order just above current resistance, at $55.09, for potential 18% gains.

Despite the market's bearish reaction to earnings news, there were many positives in the report.

First-quarter revenue hit a record high of $2.15 billion, up 7.6% from $1.99 billion in the year-ago period. However, the stock was heavily sold because sales came in slightly below analysts' expectations of $2.17 billion. Growth was below projections because sales came primarily from lower-margin consumable goods, like food, as opposed to higher margin items such as clothing and toys. However, same-store-sales -- a central indicator of retail health -- rose 4.1%, due to increased customer traffic especially over the holiday season.

With demand expected to continue for low-cost consumables, analysts' estimate second-quarter revenue will increase 8.7% to $2.46 billion, from $2.26 billion in the year-ago quarter. Over the quarter, the company plans to add 300 new food items to its store offerings. With this strategy, the company expects same-store-sales will rise 5% in the comparable second-quarter.

The earnings outlook is also strong.

In addition to a solid growth outlook, the company is attractively valued based on its PEG ratio (price to earnings divided by growth rate) of approximately 1 (16.6/15). The company also has a low price-to-sales ratio of approximately 0.73.

Risks to consider: With the stock testing technical support, if it breeches this level it could go lower before it turns higher. Also to maintain growth, FDO will need to continue offering competitive pricing to keep up with its main rival, Wal-Mart (NYSE: WMT). This strategy could impact profit margins in the longer-term.

Given the short-term technical risk and the longer-term profit margin risk, I will purchase the stock with caution. placing a buy-on-stop order at $55.09, meaning I will only purchase the stock if it hits or goes above this price. I have set a target above the October high at $64.98 -- I believe the company's strong fundamentals will eventually be rewarded by the marketplace.