OPEC Refuses to Cut Production, Oil Plunges off the Chart 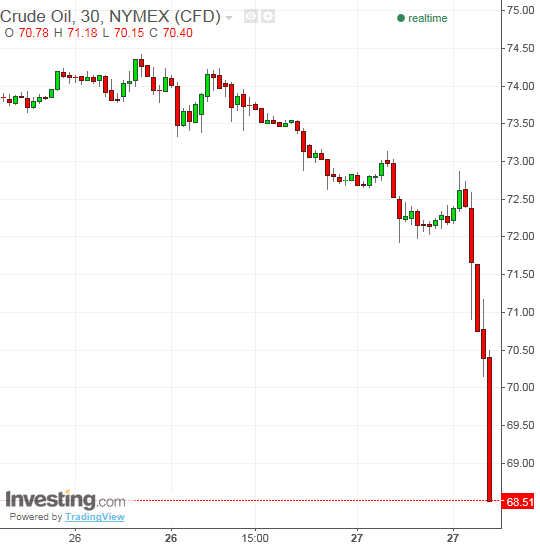 wolfstreet.com / by Wolf Richter • November 27, 2014
The global oil glut, as some call it, is caused by the toxic mix of soaring production in the US and lackluster demand from struggling economies around the world. Since June, crude oil prices have plunged 30%. It drove oil producers in the US into bouts of handwringing behind the scenes, though they desperately tried to maintain brittle smiles and optimistic verbiage in public.
But everyone in the industry – particularly junk bondholders that have funded the shale revolution in the US – were hoping that OPEC, and not the US, would come to its senses and cut production.
So the oil ministers from OPEC members just got through with what must have been a tempestuous five-hour meeting in Vienna, and it was not pretty for high-cost US producers: the oil production target would remain unchanged at 30 million barrels per day.
“It was a great decision,” Saudi Oil Minister Ali al-Naimi said with a big smile after the meeting.
Saudi Arabia and other Gulf states were thus overriding the concerns from struggling countries such as Venezuela which, at these prices – and they’re plunging as I’m writing this – will head straight into default, or get bailed out by China, at a price, whatever the case may be.
READ MORE
Please share this article
at 12:05 AM No comments: Links to this post

investmentresearchdynamics.com / By David Kranzler / November 27, 2014
On Wednesday the Census Bureau released its new home sales report and the National Association of Realtors released its Pending Home Sales Index.   Both data series missed Wall Street estimates by a country mile, with new home sales showing a slight gain over September and the Pending Home Sales unexpectedly dropping from September.  With regard to the reliability of the Census Bureau data, John Williams of Shadowstats.com explains:
A lack of stability continued with the Census Bureau’s headline monthly reporting of new-home sales in October…headline reporting remained extremely unstable. Sudden initial headline surges in monthly activity appear to provide no more than one-shot media hypes, which disappear with the next month’s revisions.
In other words, the Government’s estimates for new home sales is unreliable.
READ MORE
Please share this article
at 12:05 AM No comments: Links to this post 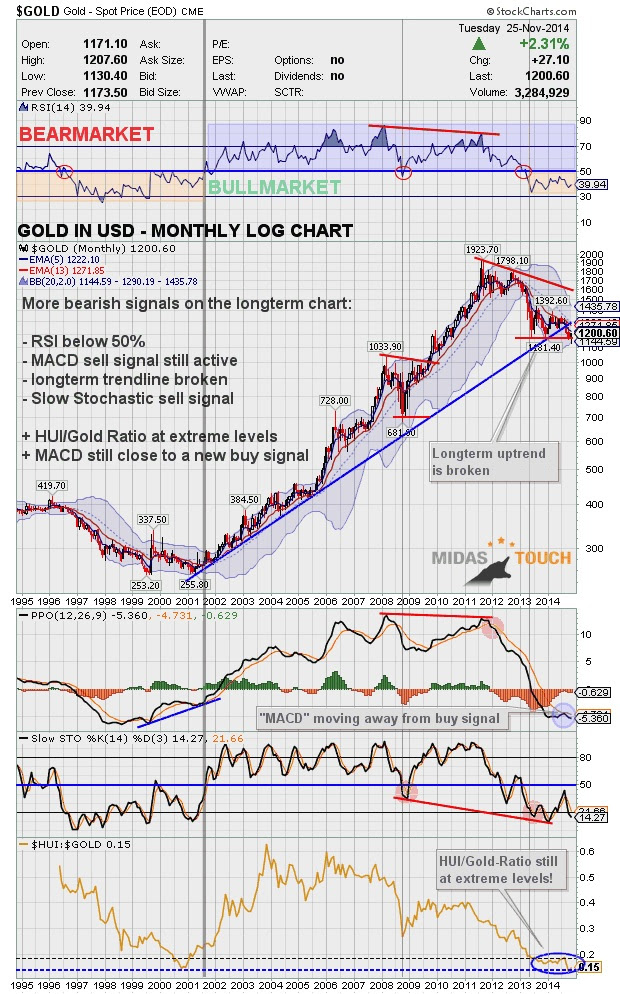 It is no secret that the currency flavor of the year has been the US Dollar. King Dollar has reigned supreme over the Forex markets especially since this summer when it began a torrid bull move higher breaking out above 81 and making a run to near 87 before it caught its breath and backed down a bit. It decided to run some more, this time to 88.50 before again pausing.

Right now, the currency markets are rather subdued thanks to the US holiday ( don’t blink however because it all might change!). There has been some movement in the major crosses but not that much to speak of in terms of anything significant. It seems that for the moment, traders are content to let the various pairs meander in some tight ranges.

“It’s Different This Time?” What Happened To US Oil Drillers During The Last Price War

zerohedge.com by Tyler Durden on 11/26/2014 14:38
History may not repeat but it rhymes so loud sometimes that Einstein would be rolling in his repetitively insane grave. As Bloomberg notes, the last time that U.S. oil drillers got caught up in a price war orchestrated by Saudi Arabia, it ended badly for the Americans. “1986 was the big price collapse and the industry did not see it coming,” said Michael Lynch, president of Strategic Energy and Economic Research who has covered the oil sector for 37 years, “it put a lot of them out of business. You just don’t forget it. It’s part of the cultural memory.” Think it can’t happen again? Think again… consider how levered US Shale drillers are and just what Saudi has to gain from keeping their foot on the US neck… In 1986, the U.S. industry collapsed, triggering almost a quarter-century of production declines, and the Saudis regained their leading role in the world’s oil market.
READ MORE
Please share this article
at 12:03 AM No comments: Links to this post