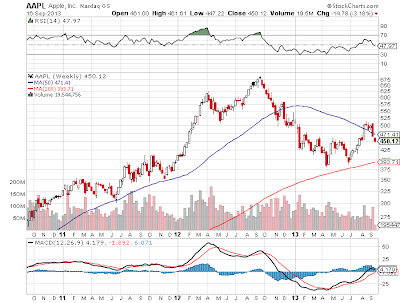 When a stock reaches "cult" status, the upside can be tremendous. Big share price moves on big momentum buying can propel these stocks into the stratosphere. Unfortunately, when the fuel runs out, these same stocks can fall back to Earth, and it can be quite painful for investors who hang on for the ride.

Three of the biggest cult stocks of the past few years are Apple (NASDAQ: AAPL), Netflix (NASDAQ: NFLX) and Tesla Motors (NASDAQ: TSLA). Each of these companies has a cool product that has redefined its respective space and all have loyal brand followings. Each also has seen a tremendous rise in share price, making investors who got in early huge amounts of money.

Yet the life cycle of a cult stock is one investors need to pay particular attention to. More specifically, you need to know what life stage that company is in if you want to make real money and avoid big losses.

Apple is the elder statesman in this trio of cult stocks, having sold products for far longer than the relatively youthful Netflix or new kid on the block Tesla. Over the past decade, investors who bet on AAPL have been rewarded like kings. The stock surged more than 6,200% from September 2003 to its all-time high just above $705 in September 2012, one of the biggest moves of any company over that period.  (more)

It’s remarkable the extent to which gold and silver are being suppressed here. I would say that what has gone on in the last week is probably is as blatant a suppression as anything I’ve witnessed in the last 20 years, and that’s saying a lot.
One of the overnight attacks last week was 4,000 contracts in the middle of the night in less than a minute.
John Embry Continues @ KingWorldNews.com
Please share this article
at 12:06 AM No comments: Links to this post

Kohl's Corporation operates department stores in the United States. Its stores offer private, exclusive, and national branded apparel, footwear, and accessories for women, men, and children; soft home products, such as sheets and pillows; and house wares targeted to middle-income customers. As of June 14, 2013, it operated 1,155 stores in 49 states. The company also provides on-line shopping through its Website Kohls.com. Kohl's Corporation was founded in 1962 and is headquartered in Menomonee Falls, Wisconsin.
To review Kohl's stock, please take a look at the 1-year chart of KSS (Kohl's Corporation) below with my added notations: 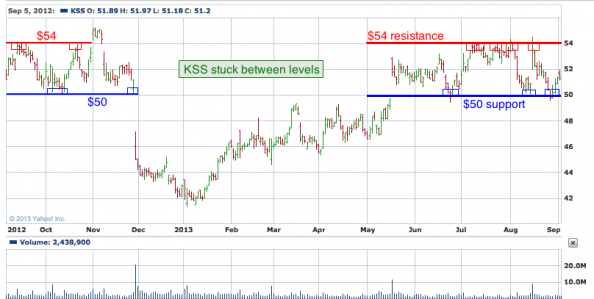 KSS fell sharply in November, but rallied slowly back up after that. During the last two or three months the stock has been stuck within a common pattern known as a rectangle. Rectangle patterns form when a stock bounces between a horizontal support and resistance. A minimum of (2) successful tests of the support and (2) successful tests of the resistance will give you the pattern. KSS's rectangle pattern has formed a $54 resistance (red) and a $50 support (blue). You can also see that the prices of $54 and $50 were also important to the stock prior to November's decline.
The Tale of the Tape: KSS has formed a rectangle pattern. The possible long positions on the stock would be either on a pullback to $50, or on a breakout above $54. The ideal short opportunity would be on a break below $50.
Please share this article
at 12:05 AM No comments: Links to this post

The debt ceiling cloud is looming over Congress once again.

The U.S. is nearing the roof of its spending limit - some economists estimate that it will be reached as early as mid-October. Congress will then have to decide whether to increase the limit or to default on the nation’s debts.

Congress last increased the debt limit in 2011 to $16.7 trillion after a harrowing debate that ultimately led to the downgrade of U.S. credit by Standard and Poor’s.


It looks as though a hearty debate is once again imminent -- House Speaker John Boehner (R-Ohio) has said that President Obama will have to negotiate spending cuts if he wants the ceiling raised. "For decades, the White House and Congress have used the debt limit to find bipartisan solutions on the deficit and the debt," he said in a news conference last week. (more)

Flextronics International (NASDAQ: FLEX),Jabil Circuit (NYSE: JBL) Could Deliver Up to 82% Even If the New iPhone Flops

Traders did not seem to be impressed by the newest products introduced by Apple (NASDAQ: AAPL). A less expensive, more colorful iPhone and thumbprint security measures might not drive a significant sales increase for AAPL, a company that reported revenue of more than $169 billion in the past 12 months, but it is likely to boost revenue for its suppliers.

AAPL has been in a downtrend since peaking in September 2012. Investors are rightfully concerned that Apple might have trouble continuing to grow at its historically high rates given the size of the company. Over the past five years, annual increases in sales have averaged 44.8%. If Apple maintained that pace, sales would top $1 trillion in five years.

Growth in earnings per share (EPS) has averaged 73% a year over the past five years. If that growth rate continued, in five years, EPS would be more than $600 a share. That would make AAPL worth about $6,000 a share at 10 times earnings. (more)