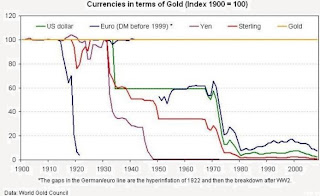 The US Federal Reserve is no longer able, in reality, to continue its multi-decade combat against the « barbarous relic » in order to guarantee the supremacy of the US currency at the centre of the international monetary system. For LEAP/E2020 the decade which has just begun will be clearly marked by a complete KO of the Dollar (and the fall of most major international currencies) by gold.

We have often reminded readers in different GEAB issues that gold constitutes both a medium/long term investment intended to protect one’s capital against the risk of a loss in value of paper currencies and financial assets, and an eventual means of payment in the event of a very serious monetary crisis. In these two cases the choice of placing a portion of one’s assets in gold is a response to anticipating events and risks in the coming years (and not the coming weeks or months). For this GEAB N°41, a special edition at the beginning of a new decade, it seems opportune to LEAP/E2020 to put forward its anticipations on gold’s progress for 2010 – 2020, completing what the team wrote in issue N°34 of the GEAB in April 2009. (more)
at 3:48 AM No comments: Links to this post

Platinum, palladium ETFs a big hit in US

The recently launched platinum and palladium exchange traded funds (ETFs) in the US have witnessed a huge buying and within a week’s time the ETFs have a holding of over 200,000 ounces.

The new exchange products are expected to give US investors easier access to the industrial metals, which have already rallied on hopes of more fund-based stockpiling. (more)
at 3:38 AM No comments: Links to this post

In his weekly column in Forbes, along with his collaborator, Arpitha Bykere, a research analyst, Roubini, now a professor of economics at New York University, said that the decisions by governments in 2008 and 2009 to do "whatever it takes" to be a backstop their financial systems and keep their economies afloat temporarily eased investor concerns.

“But if countries remain biased toward continuing with loose fiscal and monetary policies to support growth, rather than focusing on fiscal consolidation, investors will become increasingly concerned about fiscal sustainability and gradually move out of debt markets they have long considered safe havens,” writes Roubini. (more)
at 3:35 AM 1 comment: Links to this post

High-yield, or junk, bonds soared last year, and many experts anticipate the rally will continue this year.

But Harvard economist Ken Rogoff isn’t so sure.

“I care when there’s massive borrowing, especially short-term borrowing, that’s fueling asset-price rising. That I think is a big cause for concern.”

Junk bonds returned 57.5 percent last year, and many junk bond fund managers see more gains ahead. (more)
at 3:27 AM No comments: Links to this post

The year 2008 bore my mark as the year the system broke. A public article addressed the issues, laid out before the breakdown occurred in September of that year. The consequences for the many failures, the desperate nationalizations, the hasty scrambles to put financial sewage under USGovt ownership, the realization of TARP as a vast slush fund for illegitimate bank rescues, the official monetization plans put forth to prevent bond implosions, and much more occurred in the year 2009 as a recognized aftermath. Here we are in 2010 and the threats must again be laid out. A prelude was offered in an mid-December article entitled "Full Circle of Govt Debt Default" (CLICK HERE) where a global sovereign debt ruin in vicious circle was displayed the sequence that started in the Untied States and will end in the Untied States. Rather than make specific forecasts of extreme events, a list is presented much like a smorgasbord. The odds are 100:1 in favor at least one extreme event occurring in this current calendar year in my view. The odds are very high in favor of several events taking place this year. (more)
at 3:23 AM No comments: Links to this post 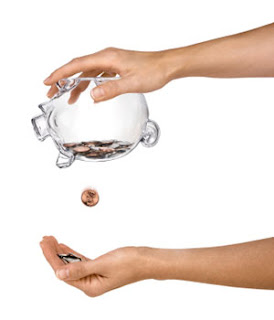 Can Canada restitch the fraying financial safety net citizens count on when we stop working?

On Dec. 17, federal and provincial finance ministers will meet in Whitehorse for talks focussing on retirement and pension reform. Hopes are high for an historic moment -- the dawn of "Pensioncare."

Fears are equally high -- that the history will have more to do with squandered opportunities and fumbled balls.

Triggering this confab is the growing consensus that Canada needs to figure out a way to get pensions for people who don't have them, and to shore up the retirement savings for people who aren't accumulating what they expected. (more)