Penn Virginia Corporation is engaged in the exploration, development, and production of crude oil, natural gas liquids, and natural gas in various onshore regions of the United States. Its operations include the drilling of unconventional horizontal development wells in shale formations primarily in the Eagle Ford Shale in South Texas. The company also has operations in the Granite Wash in the Mid-Continent, the Haynesville Shale and Cotton Valley in East Texas, the Selma Chalk in Mississippi, and the Marcellus Shale in Pennsylvania. As of December 31, 2013, it had 1,213 productive wells; owned approximately 280,400 acres of leasehold and royalty interests; and had proved reserves of approximately 136 million barrels of oil equivalent.
Take a look at the 1-year chart of Penn (NYSE: PVA) with the added notations: 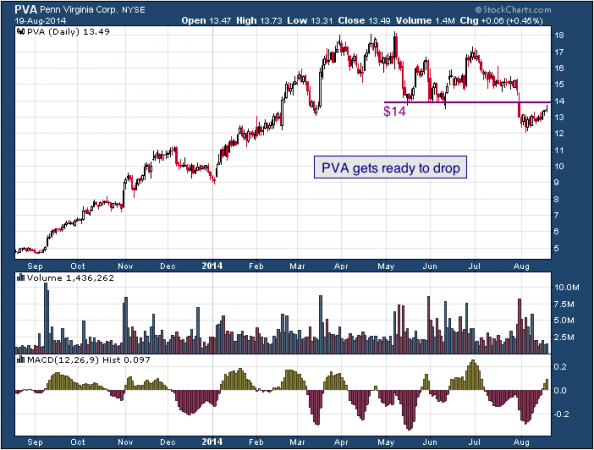 After hitting a peak of $18 on three different occasions, PVA finally gave up the good fight and started a decline. In May and June the stock found a repeated area of support at $14 (purple). PVA finally broke that support back at the end of July and eventually found a lower level of support at $12. The stock seems to be getting ready to retest $14 as resistance before heading lower.

The Tale of the Tape: PVA had a key level of support at $14. Now that the stock has broken support, a trader might want to enter a short trade at or near the $14 with a stop placed above the level of entry. A break back above $14 could negate the forecast for a move lower.
Please share this article
at 12:04 AM No comments:

These 3 High-Yield Stocks are a Bargain: TEI, DO, NPK 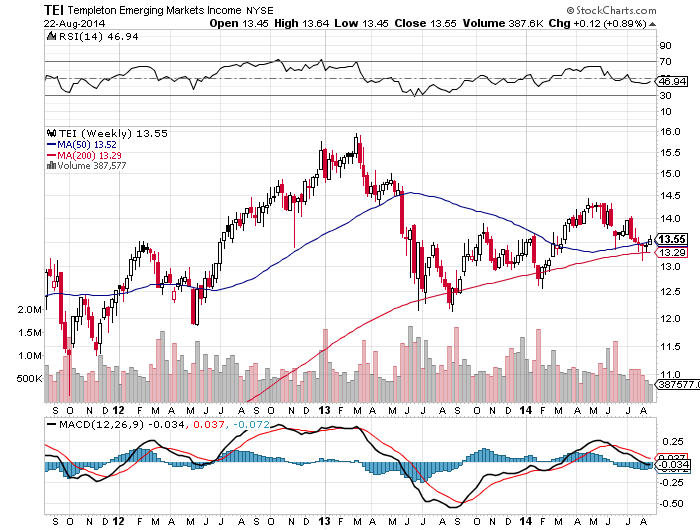 Investing surprises can be good or bad.
The CEO negotiates a sale of the company at a 50% premium to the current market price is good.
Finding out that the CEO is arrested for falsifying financial statements and the share price drops 50% is bad.  (more)

Youth unemployment sits at nearly twice the national rate for the overall labour market in Canada. The financial crisis of 2008 wiped out all the youth employment gains that had been made since 2002. The Agenda examines the social and economic consequences of jobless youth.

Baby boomers, the greediest generation control the companies and they ship our jobs to china. They rode a wave of rising wages and home prices for decades. The rang up 16 trillion in debt we have to pay. They abused every drug on earth and gave us feminism which destroyed the family. They ruined American and cashed out on the backs of gen x and gen y. Now these same idiots who got good jobs with no college degree call young people lazy for not slaving for min wage with a degree
Please share this article
at 12:03 AM No comments: 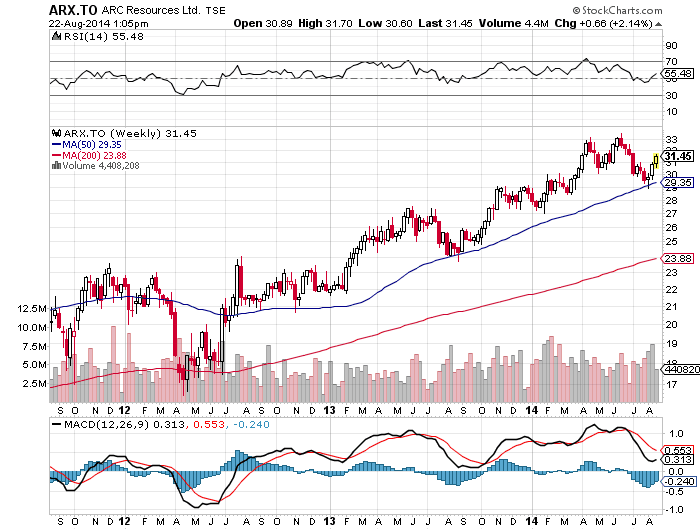 Royalty trust ARC Resources Ltd. (TSX—ARX) got off to a strong start this year. With record first-quarter production and funds from operations (FFO), the company says it’s well on its way to achieving its 2014 targets.
ARC Resources is one of Canada’s leading conventional oil and gas companies. Its operations are focused in five core areas across western Canada, providing it with an extensive resource base of high-quality oil and natural gas development opportunities.
For the three months ended March 31, 2014, ARC’s FFO were $292.3 million, or $0.93 a share, compared with $202.4 million, or $0.65 a share, in the same period of 2013. Revenues rose 46 per cent to $551.4 million.
The results reflected higher realized commodity prices as well as increased crude oil and liquids and natural gas production. Production of 105,699 barrels of oil equivalent, or boe, per day, was 11 per cent higher than the prior period. This increase was primarily attributed to production from new wells at Parkland/Tower, a Montney Formation liquids-rich natural gas play in B.C., and Ante Creek, another Montney Formation oil and gas play in northern Alberta.
This year, ARC expects to deliver a 15 per cent increase in annual production to greater than 110,000 boe per day. The company is well into the execution of a $915 million capital budget in 2014, with a continued focus on oil and liquids-rich gas development to capitalize on the strength of crude oil prices and natural gas development spending in low cost, high rate of return natural gas projects.
ARC should earn $3.70 per share in 2014. ARC is a buy for growth and income.
Please share this article
at 12:03 AM No comments: