Bill Gross: Fed Claims To Own Billions in Fort Knox Gold; “With Nothing In The Vault To Back It Up—Amazing!”

Bill Gross, founder of Pimco, the world’s largest bond fund with over $1.92 trillion under management, penned a new piece entitled, “Money for Nothin’ Writing Checks for Free.” In his editorial, he called attention to the near $10 trillion explosion in global central bank money issuance since 2006, and the impending doom historically associated with a “money for nothing” monetary policy.

His conclusion: The whole charade will soon hit a brick wall.

Of particular interest were his comments on gold, commodities, and the “Fort Knox Fairy Tale“…ie. Fed gold certificate claims on Fort Knox bullion holdings which may or may not actually exist.

Says Gross, “Supposedly they [the US Fed] own a few billion dollars of “gold certificates” that represent a fairy-tale claim on Ft. Knox’s secret stash, but there’s essentially nothing there but trust…$54 trillion of credit in the U.S. financial system based upon trusting a central bank with nothing in the vault to back it up. Amazing!”

Gross comments on the end-game picture in saying, “…[G]overnment financing schemes such as today’s QE’s or England’s early 1700s South Sea Bubble end badly…The future price tag of printing six trillion dollars’ worth of checks comes in the form of inflation and devaluation of currencies either relative to each other, or to commodities in less limitless supply such as oil or gold.”

Bottom Line: Pimco’s $1.9 trillion in wealth is closely watching gold. When “inflationary dragons” reemerge (as he puts it), what impact might a percentage of that $1.9 trillion have on the metals and commodity markets?

Today billionaire Eric Sprott warned King World News, “… we are in the biggest Ponzi scheme of all-time.” This is the second in a series of interviews with Sprott that will be released which reveals the increasingly desperate situation Western central planners face as we head into 2013.
Here is what Sprott, who is Chairman of Sprott Asset Management, had to say: “As I’ve already said, there was only one purpose for those (Fed) minutes and that was to keep the real indicators of inflation at bay. As you know, oil was starting to move up again, and gold and silver were acting well.”
Sprott continues @ KingWorldNews.com

Rosetta Resources Inc., an independent exploration and production company, engages in the acquisition, exploration, development, and production of onshore oil and gas resources in the United States. It owns producing and non-producing oil and gas properties located primarily in South Texas, including the Eagle Ford, and in the Southern Alberta Basin in Northwest Montana. As of December 31, 2011, the company had an estimated 965 billion cubic feet equivalent of proved reserves, including 36,370 million barrels of oil, 50,219 million barrels of natural gas liquids, and 446 billion cubic feet of natural gas, as well as drilled 53 net wells. Rosetta Resources Inc. was incorporated in 2005 and is headquartered in Houston, Texas.

To analyze Rosetta's stock for potential trading opportunities, please take a look at the 1-year chart of ROSE (Rosetta Resources, Inc.) below with my added notations: 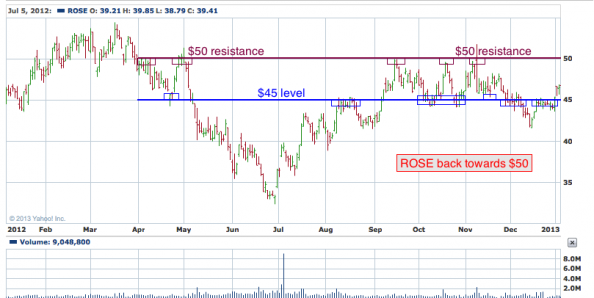 ROSE has a key level at $45 and another at $50. The $50 (maroon) level has been resistance ever since the stock fell below it at the end of May. $45 is a level (blue) that has been both support and resistance several times since April. Last week the stock broke back above it's level of $45 and is now in between it and the $50 resistance.

The European Central Bank is taking a deep breath as its President Mario Draghi now turns his attention to desperately trying to nurse the Eurozone back to some stable economic health. The crisis management measures of the last three years have subsided for now as the ECB enters its first session this year on January 10th, 2013. Draghi is hoping to extend the calm that has set in markets with his 2012 pledge to do anything in its power to end the crisis and that includes trying to keep interest rates unchanged for now. His threat of unlimited bond purchases has bought some time in this crisis for a pause as he hopes and prays that the Eurozone’s looming recession will subside. But as politics go, the fate of Europe insofar as bond holders are concern rests of not the claims of Dragji, but the political fortunes of Chancellor Angela Merkel who is highlighting Germany’s economic strength in the midst of the Eurozone chaos as she kicked off her campaigning Saturday for an important state vote that comes months before national elections. Merkel brushed aside worries about the weakness of her party’s coalition partner.

Human nature wallows in two traits (1) it resists change, and (2) it wants to believe tomorrow will be the same. Consequently, government bullshits the people all the time because that is want they want to hear as a rule – just tell me you will love me for the rest of your life, nothing will ever change, and we will live happily ever after! Hollywood has used that same formula to sell movies for decades. People do not like movies that are real. They want that happy ending. Some argue that Hollywood is responsible for the high divorce rate because they created false images of marriage and life. 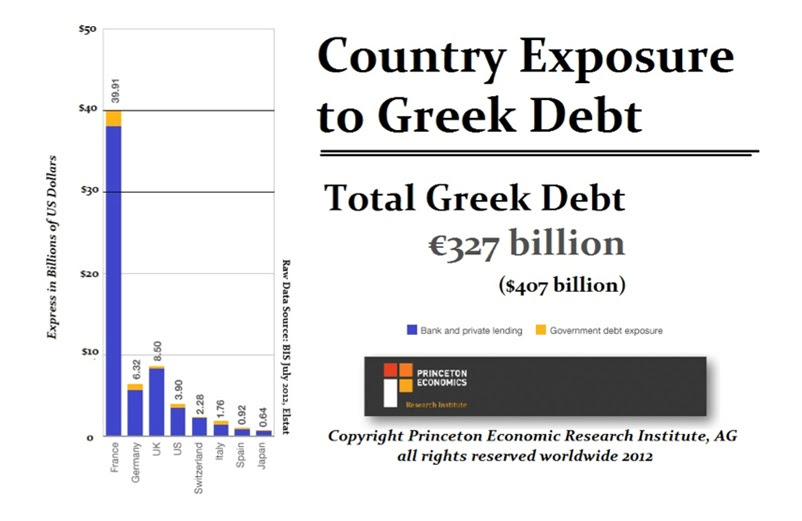 One of the worst bear markets in stock market history followed the Internet bubble. Thirteen years after the bubble, the Nasdaq Composite index is still nearly 40% below its 2000 peak. The Nasdaq 100 index initially declined almost 85% and is now about 43% below its highs.
The story is the same for many individual stocks. Some of the companies that survived the bear market are still more than 90% below their highs.
Investors who bought JDS Uniphase (NASDAQ: JDSU) at the peak now have a loss of 99%. The stock has fallen from more than $1,200 a share to about $14 a share, and it could fall even more.

JDSU makes fiber optic equipment and its customers include the world's largest phone companies. It's a big business with JDSU reporting sales totaling $1.7 billion in the past 12 months. But those sales have not led to profits and the company has a loss over the past 12 months.
JDSU has reported losses in two of the past three fiscal years. Analysts expect to see earnings per share (EPS) of $0.61 for fiscal year 2013, ended in June, followed by EPS of $0.85 cents in 2014, and steady growth averaging 10% a year after that.
Even if JDSU meets analysts' expectations, the stock seems to be overvalued. Using the PEG ratio, which compares a company's price-to-earnings (P/E) ratio to its EPS growth rate, JDSU might be worth only $8.50 a share ($0.85 a share times the 10% growth rate).
Seven analysts follow the stock and their price targets range from $7 to $16 with the median being $13.25. At nearly $14 a share, JDSU could quickly fall 4%-5% to the median target.
The weekly chart shows an even larger decline is likely.

JDSU has been range bound since the summer of 2011. The stock faces resistance at $15 and could fall to support near $9 on a decline. After closing higher for seven weeks in a row, JDSU is overextended and likely to struggle at resistance. Given the technical and fundamental picture, JDSU looks like a great short trade.
Traders could short JDSU at the market. Risk can be limited to the resistance level of $15, about 8% above the current price. A conservative downside target of $11 makes the potential reward 20%, or 2.5 times greater than the risk.
JDSU is expected to announce earnings for its most recent quarter at the end of January. Earnings releases often trigger big moves in stocks and options traders can benefit from these moves at a low cost. Options expiring in February should see large moves if there is a reaction to the earnings news.
Puts with an exercise price of $14 are trading at about $0.90, offering about the same amount of risk in dollar terms as a short trade on the stock. If JDSU reaches $12, a trader could potentially more than double their money in only six weeks with these options at current prices. A move of that size is possible if JDSU disappoints investors, and traders should close the position in early February, after earnings are announced.
JDSU may be a long-term survivor, but that does not make it profitable or a good investment. Further declines in this stock are likely and new all-time highs may not be seen for several generations.

Santelli: All Kids Left Behind

Rick Santelli updates the national debt readings, explains how politicians inadvertently created a new program called “All Kids Left Behind,” and explains why they should not be proud of it

Why TIPS Won't Protect You from Inflation...and Other Government Lies


If the "World Snake Oil Salesperson Society" had a hall of fame, good old Uncle Sam would be a charter member. When it comes to smooth-talking folks into buying debt instruments, he's the slickest around.

And Treasury Inflation-Protected Securities (TIPS) are one of his slickest gimmicks.

Treasury Inflation-Protected Securities (TIPS) are marketable securities whose principal is adjusted by changes in the Consumer Price Index. With inflation (a rise in the index), the principal increases. With deflation (a drop in the index), the principal decreases.
The relationship between TIPS and the Consumer Price Index affects both the sum you are paid when your TIPS matures and the amount of interest that a TIPS pays you every six months. TIPS pay interest at a fixed rate. Because the rate is applied to the adjusted principal, however, interest payments can vary in amount from one period to the next. If inflation occurs, the interest payment increases. In the event of deflation, the interest payment decreases.
When a TIPS matures, you receive the adjusted principal or the original principal, whichever is greater. This provision protects you against deflation.

Sounds like a sure-fire winner, right? If inflation goes up you're protected; and if deflation occurs, you'll still earn interest on the original principal.  (more)