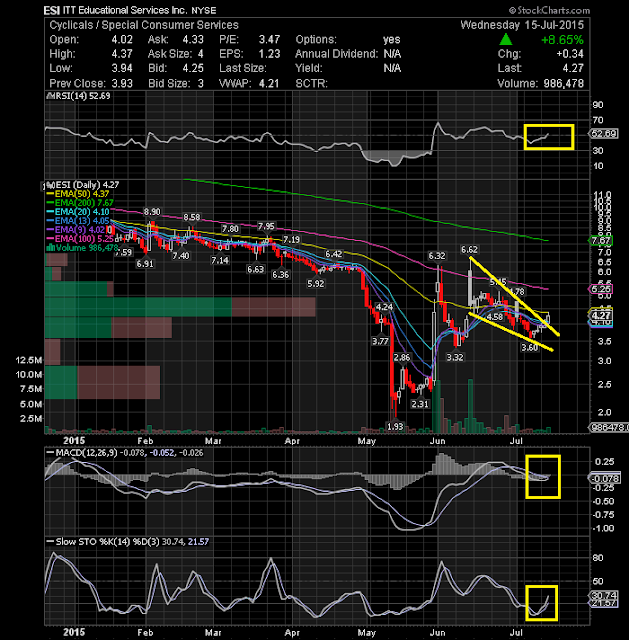 ITT Educational Services, Inc. (NYSE:ESI) traded nicely today and I am looking for continuation of the upward direction tomorrow. This stock is a short squeeze candidate, with a short float at 65% equivalent to 9 days of average volume. From a technical standpoint, the daily technical chart shows that the stock is in a rally as %K line is rising on top of %D line as the price is back above the short-term EMAs. The MACD is turning up. The RSI is also rising along with the rise in volumes, which indicates buying interest in the stock. In addition, the stock seems to have broken out on the upside from a falling wedge pattern and probably might target its 100-day EMA in short-term around $5.25 or so. Can get interesting. Keep close eye on this one for a major rally to the upside. 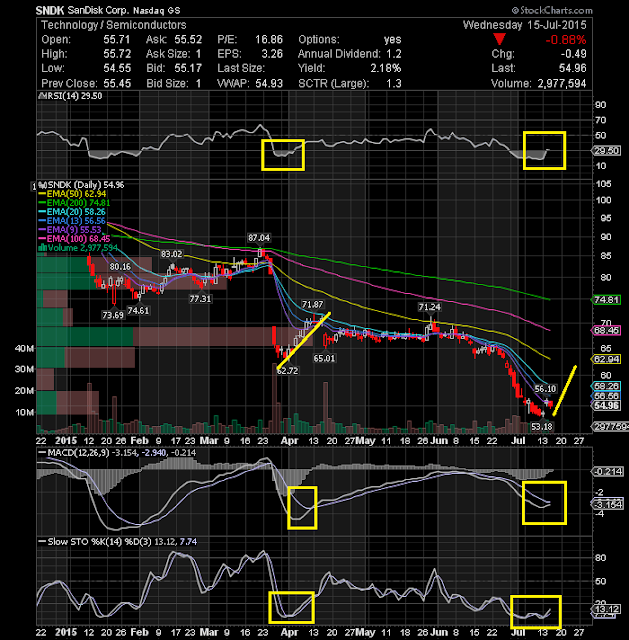 SanDisk Corporation (NASDAQ:SNDK) The technical indicator MACD is starting to look like it may cross very soon, which indicates momentum is shifting towards the upside. Keep this on your watchlist. Im long. 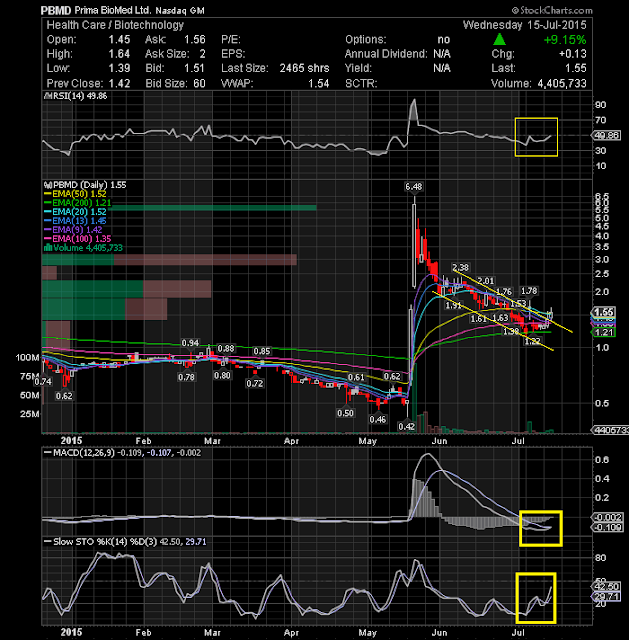 Prima Biomed Ltd. (NASDAQ:PBMD) looks about ready to pop here! The price needs to break today's high of $1.64 to expect a strong rally at this point. 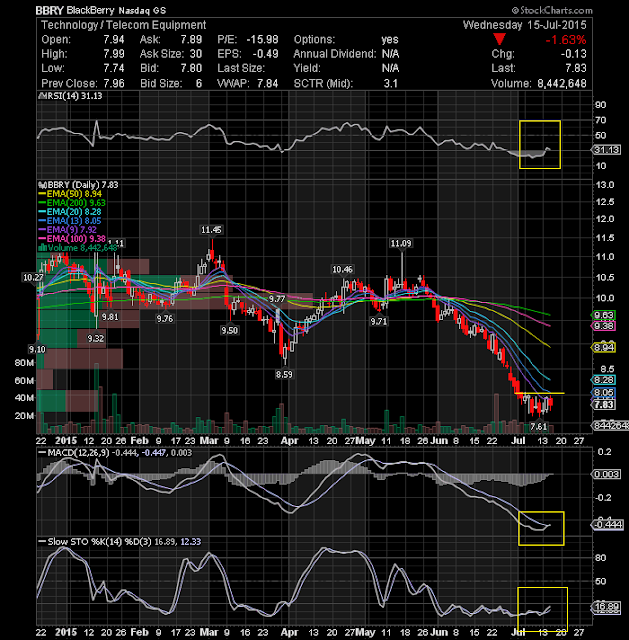 BlackBerry Ltd (NASDAQ:BBRY) As you know, I like this stock for a long-term hold. It's part of my portfolio and I intend to stay with it. Calling the bottom is always difficult, but based on the daily technical chart above we might have seen the bottom. It's noteworthy that the MACD has finally crossed over and %K line has just crossed on top over %D line showing buy signal. Resistance stays at $8, which is a big area that the stock needs to break. Watch BBRY again on Thursday, and once it breaks resistance we should see a strong upside move. You should keep this stock on your screen radar.

Restoration Hardware Holdings, Inc., together with its subsidiaries, engages in the retail of home furnishings. Its product categories include furniture, lighting, textiles, bathware, décor, outdoor and garden, tableware, and children’s furnishings. The company sells its products through its stores and catalogs, as well as through its Websites, such as restorationhardware.com, rh.com, and rhbabyandchild.com. As of January 31, 2015, the company operated 67 retail stores consisting of 57 Legacy Galleries, 7 larger format Galleries, and 3 Baby & Child Galleries, as well as 17 outlet stores in the United States and Canada. The company was founded in 1979 and is headquartered in Corte Madera, California.
Take a look at the 1-year chart of Restoration (NYSE: RH) below with added notations: 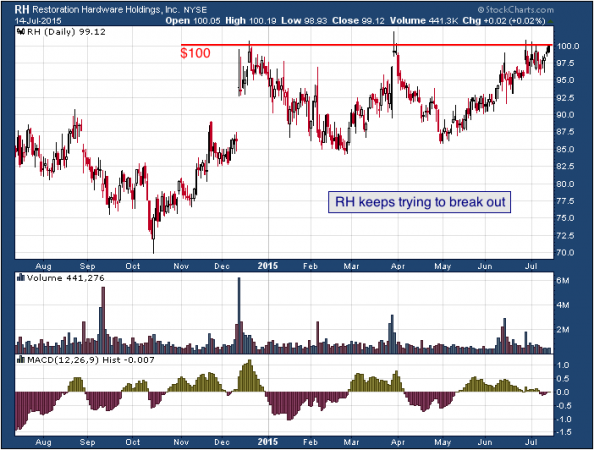 Overall, RH has traded sideways since its December peak, while also taking two large dips. Several times over that period of time the stock has hit the same resistance at $100 (red). Yesterday the stock tried yet again to break out, but failed once more. A close above the $100 should lead to a significant leg higher for RH.

The Tale of the Tape: RH has a 52-week resistance at $100. The possible long position on the stock would be on a breakout above that level with a stop placed under it.

Crescent Point Energy Corp (CPG): This 12% Yielder is Showing Signs of a Bottom 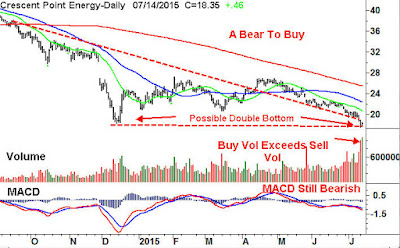 Crescent Point Energy Corp (CPG) — I last covered this Canadian oil and gas producer on March 18, noting its strong balance sheet and high dividend yield. The distribution is paid monthly, and with a current payout of $2.24 a year, shares yield more than 12%.
Raymond James has an “outperform” rating on CPG stock, while its analysts say the company is “one of the only high-yielding energy names with a sustainable business model in a prolonged lower oil price environment.”
Crescent Point Energy employs an aggressive hedging program, which protects a fairly large amount of its production in 2015 and 2016. The dividend should also provide support for shares even if WTI oil prices were to fall to $55 a barrel for many years.
Raymond James has a $29 price target on CPG stock. (It should be noted that analysts’ opinions change, and even though I try to keep up with those changes some may slip through the net.)
CPG stock is still a candidate for those seeking a high-yield investment with the possibility of a triple incentive.
First, the stock should benefit from the strong likelihood of a turn up in crude oil prices. Oil billionaire T. Boone Pickens predicts we will see $70 a barrel by year end.
Second, even though CPG stock is still in a bear market, there are signs that a bottom may be near. On Tuesday, buying volume exceeded the selling volume of Monday, which had been the highest volume day of the year. However, in light of Monday’s new low, it is prudent to reduce my buy under price to $18.50 from $21.50, and lower my trading target to $25 from $30, just below the 200-day moving average at $25.50. This would result in a return of 35%-plus.
Finally, we will be paid a handsome monthly dividend while waiting for CPG stock to reach my trading target.