Mining Stocks: Another View of Support and Resistance 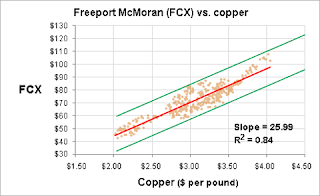 Back on October 6, I suggested another way to view support and resistance points for Freeport McMoran (FCX) – a major copper producer – by looking at the price of the stock against the price of copper itself.

For example, here’s a chart plotting the relationship between FCX and the price of copper (using a continuous contract) going back about 18 months (May of 2009):

As you can see, when copper has traded at around $3 per pound, the stock has traded from around 60 to 85. That’s a wide range, of course, since there is obviously a historical relationship between the stock and the metal.

The red line shows the linear regression line which best fits the data. I added the green lines to show potential support and resistance points.

The chart shows that the slope of the line is about 26, indicating that if the relationship holds, FCX could conceivably move up or down by that amount for every $1 move in the price of copper. (more) 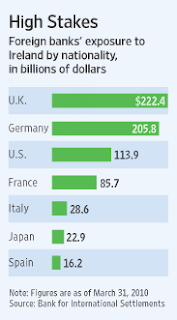 In case you were wondering about why there is intense pressure on Ireland to accept a bailout from the EU and the IMF, look no further than the fact that European banks have $650 billion Exposure to Ireland.

Nonetheless, in a clear backhand slap in the face to Ben Bernanke, Germany’s Economy Minister says "the European Union cannot throw money from Helicopters". Let's explore this messy situation with a peek at a couple of articles.

As Ireland tried to fend off pressure to accept a bailout on Tuesday and other European nations raised objections to participating in a rescue plan, Europe again found itself confronting a crisis of confidence in the euro and, ultimately, in its ability to manage its economic problems.

A very public struggle over how to grapple with the latest market unease over the fiscal stability of several European countries illustrated the touchy questions of sovereignty and difficulty of reaching consensus that have kept Europe from reacting quickly. The latest episode also raises questions about tapping an existing bailout fund that Europe created earlier this year to prevent a debt crisis in Greece. (more)

An American in Paris: Reflections on the Dollar

Knight Research' Stunning Call: "The Game Is Over"

The Game Is Over

The simple story is this: We believe the structural and cyclical terms of global trade have finally reached their tipping point. This will catalyze a wholesale change in sentiment and a historic repositioning of risk assets. The emerging market global growth story is over.

the game is over. Presently, we believe that the broad-based resurgence of investor confidence in the emerging market and secular bull market in commodities will end badly; proving that the rally which commenced in Q2 2009, was in fact an “echo bubble” facilitated by massive—and unsustainable—stimuli from the Chinese Government (more)

Chart of the Day: BRIC Inflation 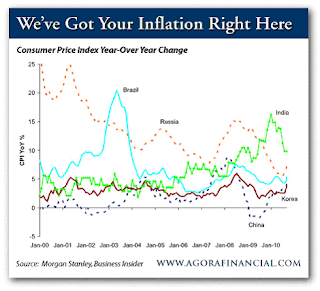 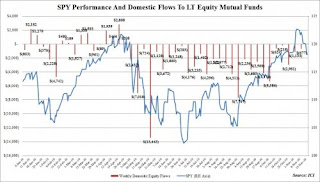 This is getting boring. The only question is whether we can hit 2011 with no inflows... 2012? 2020? $86 billion in outflows this year, means mutual funds are hanging by a thread on asset values continuing to go up, as they have no dry powder left whasoever.
at 12:15 AM No comments:

Silver: The Undervalued Asset Looking for a Catalyst 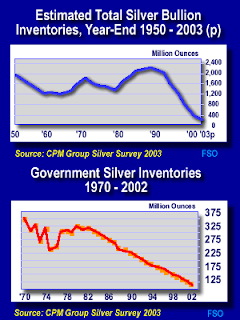 When I sat down to write The Perfect Financial Storm in the summer of 2000, my storm analogy was based on three storm fronts colliding with each other. Like the real storm on Halloween 1991, three economic forces were turning into storms fronts. The first and foremost storm was developing in the credit markets as a vast mountain of debt was being created. This ocean of money, which had ignited a boom, was now turning into a bust. In order to avoid the consequences of a deflating credit bubble, the Fed embarked on a massive monetary stimulus program. The Federal Reserve was using all of its powers in an effort to stave off the bust and bring temporary relief by manipulating the financial system with the creation of more credit. The result is that today interest rates are at historic lows and credit expansion within the financial system has accelerated even more.

The Fed is now pulling out all stops from lowering interest rates, monetizing debt and using unconventional means to prop up the markets and the economy. It is believed that “unconventional” equates to intervening in the financial markets. In statements going back to 1989, recent research papers and comments made during FOMC meetings, the Fed has made reference to ”unconventional” measures in case current monetary policy becomes ineffective. (more)
at 12:14 AM No comments:

Should you invest in GM?

(CNNMoney.com) -- Will General Motors, the hottest IPO on Wall Street, be a good long-term bet?

The company's initial public offering Thursday is set to be the largest IPO in history, selling about $20 billion in common and preferred shares.

Strong investor demand led the company to increase both the number and price of shares being offered, boosting the overall IPO size from about $13 billion in the last two days.

But the question for investors is whether the century-old behemoth, just 16 months from a federal bailout and bankruptcy reorganization, can achieve the kind of growth that rival Ford has recently.

Ford has been praised for being the only U.S. automaker to avoid a bailout or bankruptcy. It has been gaining U.S. market share with attractive and critically-acclaimed new models. (more) 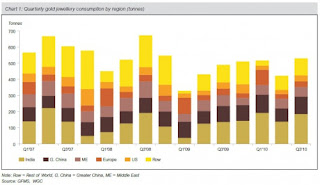 The WGC has released its complete Third Quarter gold market outlook. To summarize: major demand is seen out of China and India, whose surging populations will buy ever more PM due to "rising income levels, high savings rates and strong economic growth." Demand is seen coming from the jewelry sector, as well as from institutions, including central banks, and a jump in industrial demand "on the back of renewed growth in the electronics industry, due to the majority of semi-conductors being wired by gold." Nonetheless, even as demand continues growing, supply is rising as well: "On the supply side, we reiterate our projection that total mine supply is likely to trend higher. This is due to mine project expansions, a ramping up of production to meet the recovery in gold demand and the diminishing scope for producer de-hedging in 2010. Higher supply is also expected to come from China, Australia and US, although this may be partially offset by lower output from countries such as South Africa and Peru due to declining ore grades and rising costs." Ultimately, the only important question is whether QE will ever end. Anything less than a Yes answer, means there is virtually no upside limit to gold, absent an occasional correction. (more)
at 12:13 AM No comments: 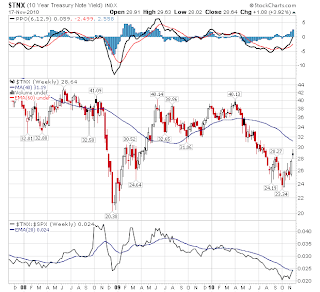 With all the talk of needing to further regulate speculators, hedge funds and other financiers, it's somewhat ironic that the biggest player in the financial markets is the Federal Reserve. It is not a federal agency or subject to a full independent audit, despite operating with a highly leveraged and inexhaustible pile of assets backed by the country itself.

Last week, we covered the Fed's most recent speculation, an additional $600 billion worth of "quantitative easing" designed to stimulate the economy and keep interest rates low.

I always stress the importance of focusing on a security's price action because, well, that's what we trade. The truth is that it's not the news, but the market's reaction to the news, that matters most. (more)

The metal used in power and construction hit a record high of $8,966 last week, but a combination of worries about monetary policy tightening, a firmer dollar and a flight from risk have since sent prices down.

"Concerns over euro zone sovereign debt are really what is at the forefront of the market's mind at the moment. What you're seeing is broad-based risk reduction," Gayle Berry, an analyst at Barclays Capital, said. 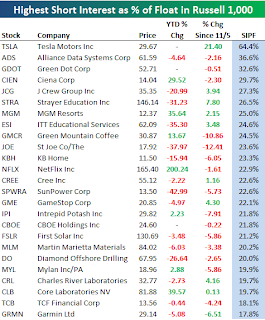 For those interested, below is a list of the most heavily shorted stocks as a percentage of float in the Russell 1,000. When markets go up, these stocks typically outperform. When markets go down, they usually lead the declines.

As shown, Tesla Motors (TSLA) is by far the most heavily shorted stock in the Russell 1,000 with 64.4% of its float sold short. Alliance Data (ADS) ranks a distant second at 36.6%, followed by Green Dot (GDOT), Ciena (CIEN), and J Crew (JCG). Other notables on the list include NetFlix (NFLX), First Solar (FSLR), and Garmin (GRMN).