In a globally-connected world, viruses can spread quickly. From influenza to dengue fever to herpes to HIV, viral contagions can spread at an alarming pace. Trouble is, doctors researching these viruses, known as virologists, have found it quite difficult to identify permanent cures. For example, even though doctors completely understand how the flu virus works, millions of people still come down with a flu bug every year. And in some instances, the flu can have fatal consequences.

But little-known NanoViricides (OTC: NNVC) may have "cracked the code" when it comes to viruses. The company still has a lot to prove, as is the case with any young biotech stock that trades for around $1. But it appears to be making progress, and if it can deliver on at least one of its several drugs in development, then the upside could be significant.  (more)

What Can We Infer From Copper and Palladium Charts? 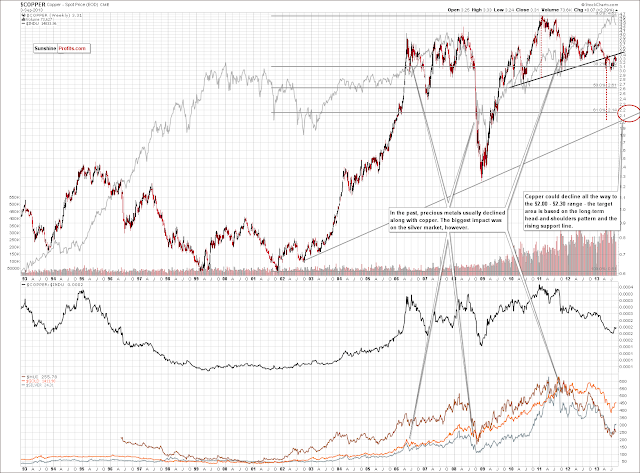 According to Reuters, gold rose after President Barack Obama won the backing of key figures in the U.S. Congress, including Republicans, in his call for limited strikes on Syria to punish the government for its suspected use of chemical weapons against civilians. Earlier on Tuesday, a missile test by Israeli forces training in the Mediterranean with the U.S. Navy set nerves on edge. These circumstances stimulated safe-haven buying in the gold market and resulted in an increase in price to above $1,416 an ounce.
However, this improvement didn’t last long. The yellow metal gave up some of its gains as the dollar rose after strong U.S. data boosted prospects the Federal Reserve would trim its stimulus this month. Despite this decline, prices held above $1,400 on continued concerns around Syria. (more) 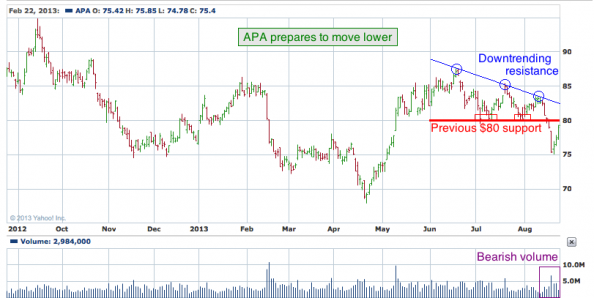 APA had formed a key level of support at $80 (red) over the last (3) months. In addition, the stock formed a trendline of resistance (blue) starting in the middle of June. These two levels combined had APA stuck within a common chart pattern known as a descending triangle. At some point, the stock had to break through one of those two levels, and as you can see, it was the $80 support that finally broke.
APA has already fallen to $75 and has snapped back over the last week. The stock should be moving overall lower from here and the bearish volume (purple) supports that forecast.
The Tale of the Tape: APA broke the support of its descending triangle. A short trade could be made on any rallies back up near $80. A break back above the $80 level would setup another possible short trade at the trendline of resistance.
Please share this article

Unemployment Rate Surges To Highest Since 2011

With ADP out of the way, and providing no guidance to an extreme NFP print one way or another, we once again turn to Gallup. As a reminder, a few days ago we showed that things are bad and getting worse for America’s job prospects following direct polling land as relates to unemployment on a seasonally unadjusted basis. Today, the polling group has released its seasonally adjusted unemployment number and how it compares to the BLS’ own estimation of the labor market. In a word: it is not pretty (which, again, is good for those who are hoping and praying St. Ben will keep the monetary Kool Aid running for a little bit longer): at 8.6% it is over 1% higher than the BLS’ reported print, and is the highest since the end of 2011.