Gold recovered some strength on Thursday after a drop in the prior session attracted bargain hunters, however a strong dollar and diminished expectations of more QE in the US made the yellow metal vulnerable to more selling.

Gold has dropped around 8% since late February as institutional funds appeared to have closed out of their bullish gold bets on worries the Fed will not embark on another round of QE to keep interest rates and borrowing costs low. The dollar hit an 11 month high against the yen and a 1 month peak against the euro on Thursday on growing hopes of a US economic recovery and continuing rises in U.S. bond yields.

South Africa's gold output fell again in January and was down a very large 11.3% in volume terms in January. Annual gold production is set to be close to 220 tonnes which is a level of gold production not seen since 1922 (see chart below). 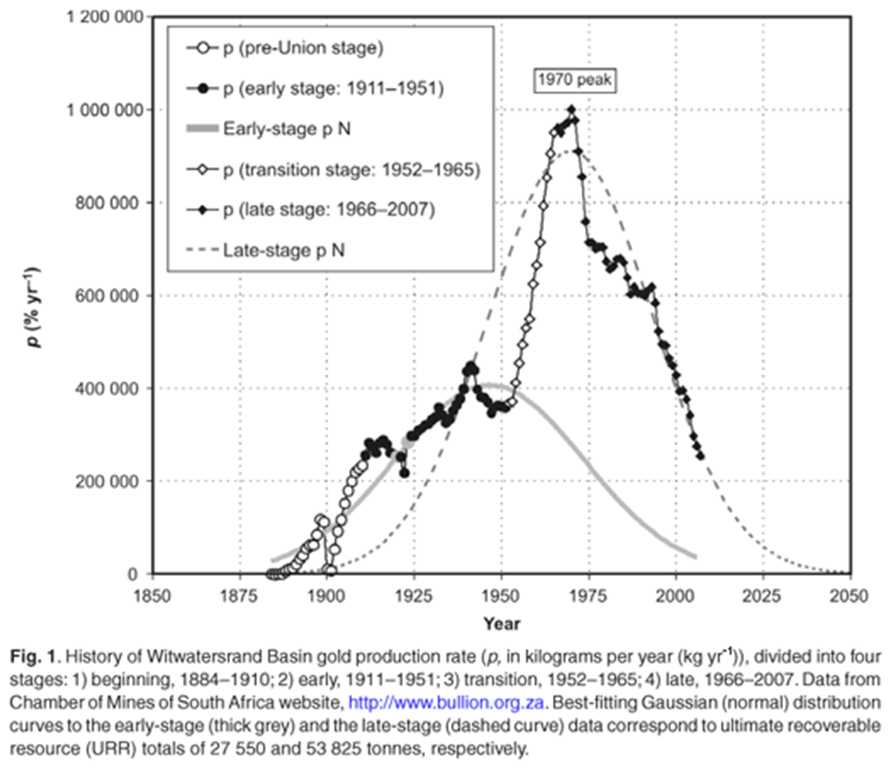 The falls were seen only in the gold market with production of other minerals holding up with total mineral production down only 2.5% compared with the same month last year.

South Africa as recently as two decades ago was the world's largest producer of gold by a huge margin. Only 40 years ago South Africa produced more than 1,000 tonnes of gold per annum but will only produce some 220 tonnes in 2012. Production peaked in 1970 and has been falling steadily and sharply since.

The nearly 80% fall in South African gold production has led to it being recently overtaken by China, Australia and the U.S. It is now even at risk of being overtaken by Russia. 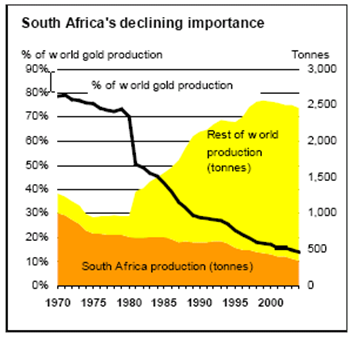 The scale of the collapse is such that it is worth considering the possibility that the Apartheid regime may have exaggerated the size of South African gold production. Indeed, similar questions could be asked of the massive increase in China's gold production in recent years and whether Chinese gold production tonnage figures are exaggerated.

The massive 11.3% decline in South Africa was more than even that seen in December when gold output fell by 8.2%.

The continuing output decline is due to many of the country's biggest gold mining operations having reached the ends of their lives and having closed down.

Old mines that are still operating are mostly getting deeper and deeper with safety concerns a limiting factor, while new operations coming on stream tend to be either small by comparison, low grade, or both.

South Africa's continuing gold production decline is not cyclical and is permanent and is another bullish factor for the gold market in the long term.

Geological constraints mean that there is little prospect of any serious reversal in the trend. Geological and the lack of any major gold finds anywhere in the world in the last 20 years also suggest that the supply side of the gold equation remains bullish.

The decline in South African production has been a major contributor to at best flat global gold production over the past few years.

Indeed, some data suggests that global gold production may have peaked in the early 2000s.

In the light of the continuing strong fundamentals, this is another healthy correction in the gold market as investment demand is set to remain strong for the foreseeable future while supply remains tight.

The S&P 500 VIX Volatil­ity index traded below 15 yes­ter­day for the first time since early 2011. A num­ber of finan­cial play­ers have com­mented that a drop below 15 for the VIX is a warn­ing sign for the mar­ket. A look at the his­tor­i­cal trad­ing pat­terns of the VIX and the S&P 500, however, show that this is sim­ply not the case.

A VIX at 15 really isn't that low based on his­tor­i­cal stan­dards either. Since 1990, the median daily close of the VIX has been 19, and dur­ing the two peri­ods men­tioned above, the median was 13.

Fol­low­ing a pretty siz­able move in inter­est rates, the yield on the 10-Year US Trea­sury (2.22%) is now above its 200-day mov­ing aver­age for the first time since last July. Granted, 2.22% is still low by his­tor­i­cal stan­dards, but it still doesn't negate the fact that the US gov­ern­ment has seen its bor­row­ing costs increase by 12% in a week. When your bor­row­ing amounts are mea­sured in tril­lions, every lit­tle basis point counts. For every tril­lion the gov­ern­ment bor­rows, a one basis point increase in inter­est rates trans­lates to an extra $100,000,000 in annual bor­row­ing costs.

Whole Foods Is a Natural Choice for Your Portfolio

The adoption of a new price strategy, more lower-priced offerings, and the square-footage expansion should lead to better-than-average industry growth. Furthermore, a share repurchase and a dividend increase from the current 56 cents per share are expected.

Technically WFM has been in a powerful bull channel for over a year, and while there is no reason to assume this will change, a pullback to under $68 is the preferred buy point. Then WMT should run to the top of the current bull channel at close to $80 by the end of Q1 2012.

Is Apple Getting Ready To Tank? 5 Facts Your Broker Won't Tell You

Many investors rely on brokers and the financial media for advice on investments. This is unfortunate, because much of the advice from these sources is demonstrably wrong and harmful to financial health. Here are five investment facts your broker will never tell you:

1. Index investments are growing. By some estimates, $2.3 trillion is invested in passive funds and exchange-traded funds. What do these investors know that your broker is keeping from you?

2. Index funds have higher expected returns. According to an article by Christopher Philips in the Journal of Indexing, index fund investors can expect to outperform a majority of higher-cost actively managed funds over similar time periods. The evidence is quite compelling. Every report prepared by Standard & Poors comparing index to actively managed funds over the past 10 years found that, during a five year market cycle, a majority of active funds in most categories failed to outperform indexes. Is your time horizon longer than five years? If so, why is your broker recommending higher cost actively managed funds that are likely to underperform comparable index funds?

3. Index funds are more tax efficient. It's not the returns of a fund that should be your sole concern. It's how much of those returns you keep, after taxes. Philips notes the typical actively managed fund distributes a whopping 50 percent of its annual price appreciation in the form of capital gains, creating tax liability for holders of its shares. In stark contrast, index funds distribute an estimated minuscule 0.5 percent as long-term gains. Turnover in a portfolio creates taxable gains. Actively managed funds have much higher turnover than index funds because actively managed funds chase returns. Index funds sell only when necessary to track the index.

4. Indexing works in both highly efficient and less efficient markets. When you mention indexing to brokers, it is much like advocating a vegetarian diet at a cattlemen's convention. The reaction can range from outrageous to simply mistaken. Brokers love to tell you how indexing might have some benefit in highly efficient markets like the U.S. government bond market. In contrast, they will note that in less efficient markets, like small-cap U.S. and high yield bond funds, active managers strut their stuff and outperform. The data is to the contrary, but don't expect them to show it to you. Philips looked at 15 years of data as of December 31, 2011. Active managers in both small-cap U.S. equity and high-yield U.S. bond funds underperformed significantly.

5. Index funds outperform in bull and bear markets. You may have heard this statement (or some variant): In bear markets, active fund managers shine because they can shift assets in and out of the market and minimize losses. It's bunk. Phillips calculated the percentage of active managers who outperformed the market during various bull and bear markets. He found that in four of the seven bear markets since January 1973, the average actively managed mutual fund underperformed the index. It's worse in bull markets. Active fund managers underperformed in seven of the eight bull markets examined.

If you knew these facts, you would not invest in actively managed funds. Now you know.

Mark Newton, Greywolf Execution Partners, discusses whether a pullback in oil would signal more trouble ahead.
at 12:03 AM No comments: Links to this post

The "Chart of the Day" is Penske Automotive Group (PAG), which showed up on Wednesday's Barchart "All Time High" list. Penske on Wednesday posted a new all-time high of $25.15 and closed up 2.83%. TrendSpotter has been Long since Jan 17 at $21.11. In recent news on the stock, Penske on Feb 15 reported Q4 EPS from continuing operations at 47 cents, above the consensus of 40 cents. Sterne Agee on March 14 reiterated its Buy rating and raised it target for Penske to $29 from $24. Gabelli on Feb 16 said that Penske shares should be bought on weakness and reiterated its Buy rating. Penske Automotive Group, with a market cap of $2.1 billion, is an operator of franchised automobile and light truck dealerships and related businesses.