“Far Worse Than 1986″: The Oil Downturn Has No Parallel In Recorded History, Morgan Stanley Says 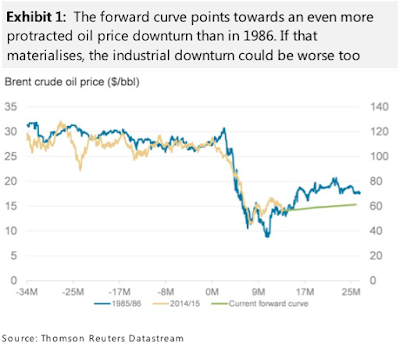 zerohedge.com / by Tyler Durden on 07/22/2015 16:31
On Tuesday the market got yet another reminder of just how painful the “current commodity price environment” has been for producers when Chesapeake eliminated its common dividend in order to conserve cash.
After noting the plunge in Chesapeake’s shares (to a 12-year low) we subsequently outlined why the US shale “revolution” is now running out of lifelines as hedges roll off and as the next round of credit line assessments looms in October.
A persistent theme here – as regular readers are no doubt aware – has been the extent to which an ultra-accommodative Fed has contributed to a deflationary supply glut by ensuring that beleaguered producers retain access to capital markets. In short, cash-strapped companies who would have otherwise gone out of business have been able to stay afloat thanks to the fact that Fed policy has herded investors into risk assets.
In a ZIRP world, there’s plenty of demand for new HY issuance and ill-fated secondaries, which means the digging, drilling, and pumping gets to continue indefinitely in what may end up being one of the most dramatic instances of malinvestment the market has ever seen.
READ MORE
at 12:03 AM No comments: Links to this post 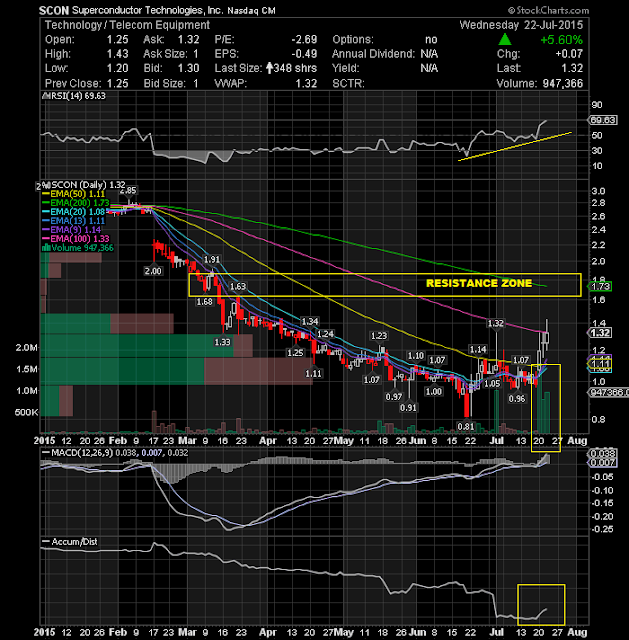 Superconductor Technologies, Inc. (NASDAQ:SCON) has been under accumulation for a couple days now. Look at the 3 big volume days. That's serious accumulation.The daily technical chart shows a very bullish sign as the stock is back on top of 50 day exp moving average. For now, expect a run up to next resistance area around $1.65. If the stock is able to cross it and sustain above it, then it might go to $1.73 ( 200EMA ). Support lies around $1.11. 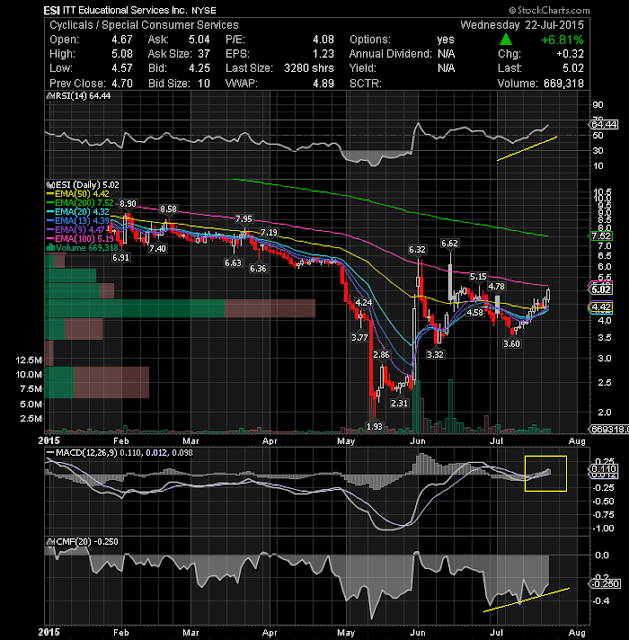 Shares of ITT Educational Services, Inc. (NYSE:ESI) are starting to heat up and are worth watching. If volume can pick up I think this stock can break through resistance at $5.15 and re-test its recent highs around $6.62. 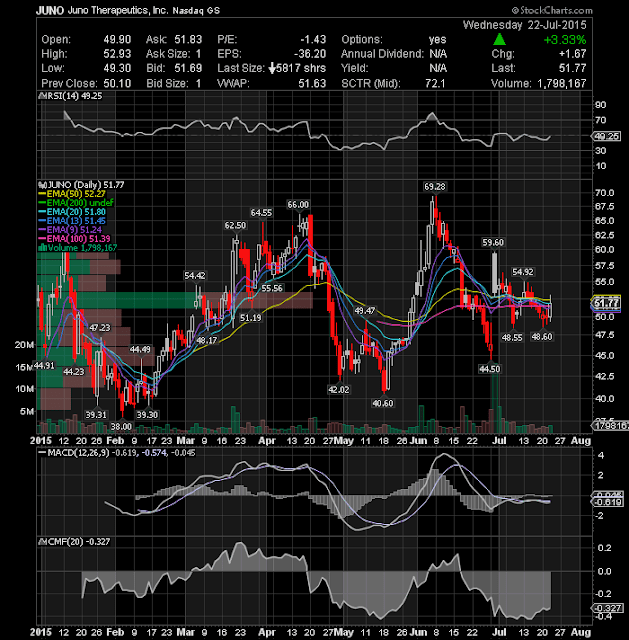 If Juno Therapeutics Inc (NASDAQ:JUNO) can break out above $55 with heavy volume, I think the stock could shoot up to test the $60 area. There looks to be good upside potential, so watch the stock very closely on Thursday. 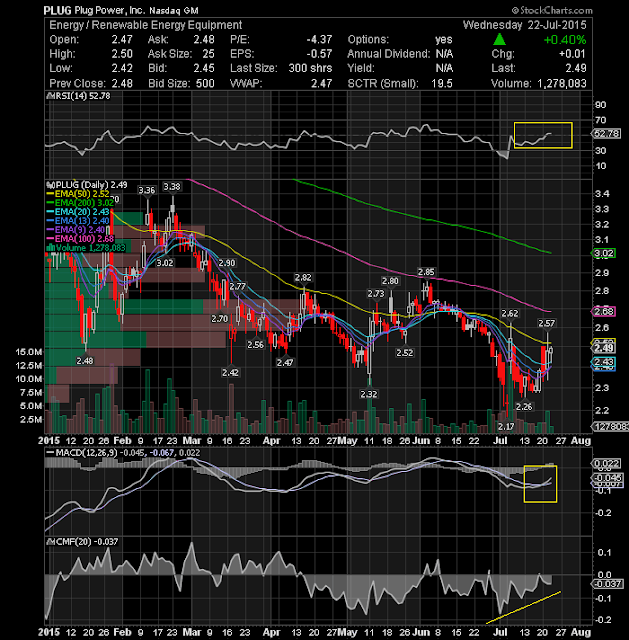 Spirit Airlines, Inc. provides low-fare airline services. As of June 30, 2015, it operated approximately 360 daily flights to 57 destinations in the United States, Caribbean, and Latin America. As of December 31, 2014, the company had a fleet of 65 Airbus single-aisle aircraft comprising 29 A319s, 34 A320s, and 2 A321s.
Take a look at the 1-year chart of Spirit (NASDAQ: SAVE) below with my added notations: 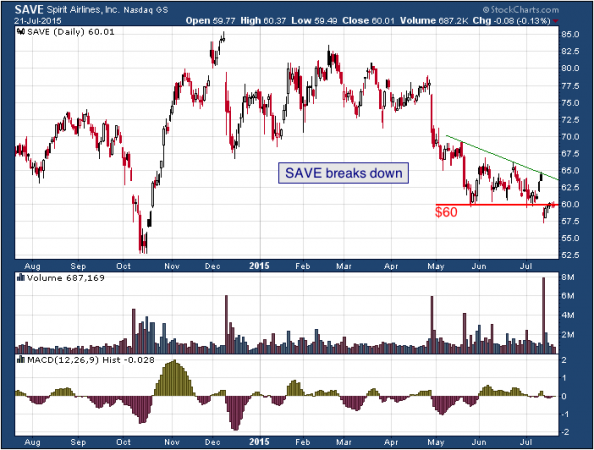 SAVE has formed a key price level at $60 (red) over the last two months. In addition, the stock created a down trending resistance starting from the middle of May (green). These two lines combined had SAVE stuck trading within a common chart pattern known as a descending triangle. At some point, the stock had to break support or break its string of lower highs, and last week the stock broke support.

The Tale of the Tape: SAVE broke out of a descending triangle pattern. A short trade could be made on a rally up to $60 with a stop placed above that level. A break back through $60 would set up a potential long trade, and another long could be made on a break through the downtrending resistance.

Teucrium Corn Fund (CORN): It's Time to Take Profits on Our "Trade of the Year" 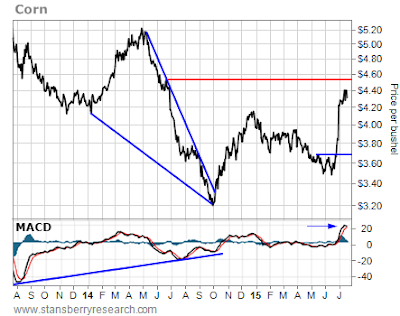 We're less than eight months into 2015. But our "trade of the year" is already paying off...
Last October, I said that 2015 could turn out to be the year of the corn trade. Since then, the price of corn has rallied around 25%.
Traders who took our advice to buy the Teucrium Corn Fund (CORN) are sitting on solid profits. But now, it's time to take those gains off the table... (more)
at 12:03 AM No comments: Links to this post