Danger! Watch Your Step: An Interview With Gregory Weldon

Gregory Weldon publishes Weldon’s Money Monitor, The Metal Monitor and The ETF Playbook in addition to operating his Managed Futures Account Program as a CTA. He has a unique ability to define and forecast the market’s direction through his proprietary dissection of fundamental and technical market data. Few publications offer the wide scope offered within the macro-perspective presented by Greg, and few newsletters so fluidly combine fundamentals, technical analysis, inter-market examinations, psychology, and intuitive insights as does Weldon’s Money Monitor… stacking macro-trends against the micro-evolution taking place. Weldon Financial is now a highly regarded and profitable publishing company, having garnered some of the world’s most respected fund managers as loyal and daily readers. http://www.weldononline.com/index.aspx

A bleak second half for stocks, Terrible cuts for California, a set of justice in the form of liquidity controls, November elections are coming, please remember, no stability in world markets, 43.9 trillion in derivatives positions of US commercial banks and trusts...

The initial official excuse for such a perceptions drop in the Dow was a wrong keystroke, which is ludicrous.

Then there is the almost total control by Goldman Sachs of the market and control via the Supplementary Liquidity Provider. All they have to do is cut off liquidity and the market plunges. Thus, there is no question in our minds that Goldman attacked the market and took it down to let House and Senate members know that they can make the market do whatever they please with the full cooperation of the SEC and CFTC, this convinced lawmakers that the Illuminist threat was very real. There would be no breakup of too big to fail banks and no real audit of the Fed. The public would be thrown a bone. This is a good reason why program trading has to end and why derivatives have to be abolished. This is all a reflection of two sets of justice. One for the elitists and one for us. This also shows us that crime pays. It also proves our country is under the financial control of terrorists. This power has to be taken away from these criminals. The legal way to do that is by throwing most all of Congress and the Senate out of office. Then we will have a chance to save our country. Otherwise you will see this all move into the streets. (more) ,

Gold Investors Should 'Rush to the Exits': Dennis Gartman 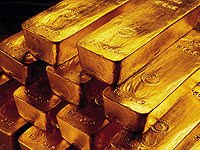 Investors should get out of gold immediately as the metal reaches a technical top and is due for a pullback, says Dennis Gartman, hedge fund manager and author of The Gartman Letter.

While the move out may only last for the short term, he says the metal has "gone parabolic" and should be sold.

"(W)e are traders here, not investors, and traders listen to and watch the market, looking for signs of a changing environment," Gartman writes. "The environment has been changing; violence and volatility are everywhere. We want out. The sidelines look inviting." (more)
at 12:55 AM No comments: Links to this post

More of my readers ask me about confiscation than any other issue. I continue to refer people to my article from 2008, but it's time for an update.

I stand by what I wrote in the past, but there is more to say.

First of all, gold in the hands of the American public has never been confiscated, never can be, and never will be.

confiscate
1. To seize (private property) for the public treasury.
2. To seize by or as if by authority. See Synonyms at appropriate.
adj. (knf-skt, kn-fskt)
1. Seized by a government; appropriated.
2. Having lost property through confiscation. (more)

Seth Klarman: Stocks Will Have Zero Return For A Decade

Legendary fund manager Seth Klarman of the Baupost Group made some rare public comments recently at the CFA Institute in Boston. Suffice it to say that he does not have a bright and sunny view of the world.

Some choice quotes relayed by Aaron Pressman at Reuters:

* "Given the recent run-up [in stocks], I'd be worried that we'll have another 10 years of zero returns."

* "I'm more worried about the world broadly than I've ever been in my whole career."

* Current market conditions remind Klarman of a Hostess Twinkie snack cake because "everything is being manipulated by the government" and appears "artificial."

trusts...have "rallied enormously" and are "quite unattractive."

* Inflation is a risk that Klarman said he is particularly concerned with given the government's high rate of borrowing to bail out the financial system. Baupost has purchased far out-of-the-money puts on bonds to hedge the risk, he said.

Baupost has 30% of its assets in cash.

In the States, Congress is starting to mull the inevitable tax hikes and benefit cuts needed to save Social Security. Sometime this year, for the first time ever, the fund will begin paying out more than it collects. By 2037, the current projections suggest, it’ll be out of money entirely. Clearly, something’s got to give.

So… who’s going to pay more, and who is going to get less? The Senate Special Committee on Aging published a report this week with a few suggestions on plugging the gap. According to the report:

Heh, so pick your poison. We wonder if any politician will have the stones to campaign this year on a “more taxes, fewer benefits for the elderly!” ticket. Hmmm…

We recommend you start beefing up your own retirement plan.
at 12:41 AM No comments: Links to this post

“I would just point out that the world is having a strong economic recovery, and so is Europe,” he told Bloomberg.

European policymakers announced a $1 trillion aid package to halt Europe’s debt problem. (more)
at 12:28 AM No comments: Links to this post

The Fix In (the VIX)

To measure the ongoing success or failure of massive QE "working groups" interventions, all one needs to keep an eye on is the VIX. Readings below 20 suggest, "The FIX is in", whereas readings above 20 diminish the mission control effort to reflate monopoly-saving bubbles.

In effort to maintain control of supreme monopolies, policy makers and monetary authorities have successfully fostered an egregiously false paradigm of ever-rising paper asset values in setting policy and enacting legislation that in effect "FIXES the VIX" to extraordinarily low levels. This fuels rampant speculation, and excessive risk taking without regard for useful gains in productivity and the real economy over the medium or long-term. (more) 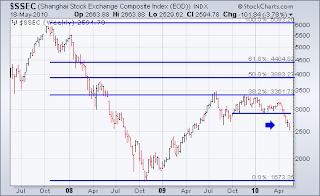 Stocks trading in Shanghai are off 25% from their cyclical bull market peak 0f 3500 which was reached in the summer of 2009. A decline of more than 20% is viewed by many as bear market territory. According to The Vanguard Group “there’s no agreed-upon definition of a bear market, one generally accepted measure is a price decline of 20% or more over at least a two-month period.” Shanghai now qualifies.

The secular (Long Term) trend remain is bearish as well as the cyclical rally failed to decisively reach above the 38.2% Fibonacci level. A bear market in China can directly effect global equity markets as noted here.

U.S. stock markets will erase their past six months of gains "in a matter of weeks," said Prechter, president of research company Elliott Wave International, in Gainesville, Georgia and known for predicting the 1987 stock market crash.

Investors should opt for the safest possible investments, putting their money in very short-term Treasury bills or cash, he said, reiterating this long-expressed preference based on the expectation of long-term economic weakness. (more)
at 12:10 AM No comments: Links to this post 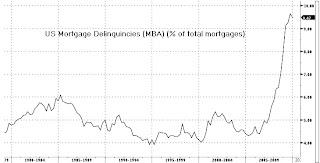