Crude Oil and the Canadian Dollar

Today oil took another drubbing with most other commodities, as the slowing global economy met systemic shocks from collapsing speculative frenzy in China and a surprise “No” in Greece. As dramatic as drops have been so far, it is possible that mean reversion trends here are just getting started.
As shown in this long term chart of West Texas Crude since 1990, a retest of the 2009 lows for crude below $40 is well within reason.  Now that oil is firmly below the secular bull channel that supported it since 2001, a break below the prior cycle low of $37 in 2009 would confirm a fresh secular bear that can weigh on prices and producers for years.

The Canadian (and Aussie) dollar dumped along for the ride as short sellers renewed bearish bets on commodity centric economies and odds increased that the Bank of Canada will cut rates again this month.  See:  Would Stephen Poloz risk ‘inflaming’ Canada’s housing and debt with another rate cut.   Unfortunately, the answer is yes, because all central banks ever had to work with was cutting rates as a tool to encourage risk-taking. But because they used that prod repeatedly and recklessly for the past 15 years,  it is virtually impotent now.  The greatest effect is likely on the currency.  The loonie could easily dive toward the .70U$ area in the process (as shown below).

TSLA Stock – Has Tesla Topped Out? 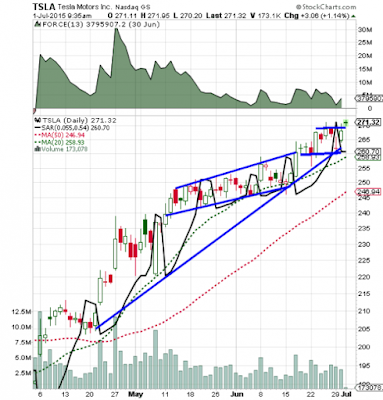 But lately, the success of Tesla stock has started to show some strain.

TSLA stock is down about 5% in the last few days in part because of a downgrade from Deutsche Bank[2] from “buy” to “hold” on fears that most of the success is baked into shares.

Of course, at the same time, DB raised its target from $245 to $280 and expressed optimism over Tesla’s battery technology. So it wasn’t all bad. (more)

M.D.C. Holdings, Inc. looks ready to break out of a short-term bullish flag 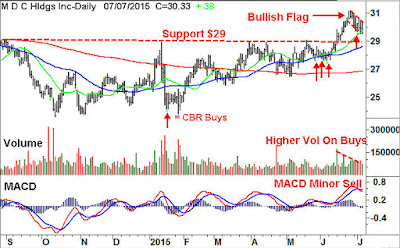 M.D.C. Holdings, Inc. (MDC) — This U.S. homebuilder sells under the name Richmond American Homes and specializes in single-family residences for first-time and first-time move-up buyers.
It is relatively small compared with its peers. In 2014, it was the 11th largest in the industry based on revenues of $1.7 billion and 12th largest when measured by the number of homes delivered.
Despite a slowdown in its construction levels recently, analysts at Capital IQ believe the company is positioned to benefit from the continued housing recovery. They note its ability to control costs, strong balance sheet and well-placed markets put it in a position to increase revenues and earnings. For 2015, they estimate earnings will increase 25% to $1.61 per share, and then rise another 13% in 2016 to $1.82.
Technically, MDC stock broke from a saucer consolidation that took nine months to form. The breakout was preceded by several strong buy signals from my proprietary indicator, the Collins-Bollinger Reversal (CBR), before smashing through the resistance (now support) at $29.
Shares are currently consolidating in a short-term bullish flag and should break to a new 52-week high within days.
The MACD indicator is on a minor sell signal, but that should be ignored in light of current overall market volatility.
Buy MDC stock at $30.50 for a trade to $35, which would result in a 15% return. Investors should also consider this stock for participation in the home construction industry since its long-term target is estimated to be in the $40s. In addition to its appreciation potential, the company pays an annual dividend of $1 for a current yield of 3.3%.

Knowles Corporation designs, manufactures, and sells products and components to the mobile communications, consumer electronics, medical technology, telecommunications infrastructure, military, aerospace, and industrial markets worldwide. The Mobile Consumer Electronics segment designs and manufactures acoustic products, including microphones, speakers, receivers, and integrated modules for the handset, tablet, and other consumer electronic markets. The Specialty Components segment designs and manufactures electronic components used in medical and life science applications; and solutions and components used in communications infrastructure and various other markets.
Take a look at the 1-year chart of Sanderson (NYSE: KN) below with my added notations: 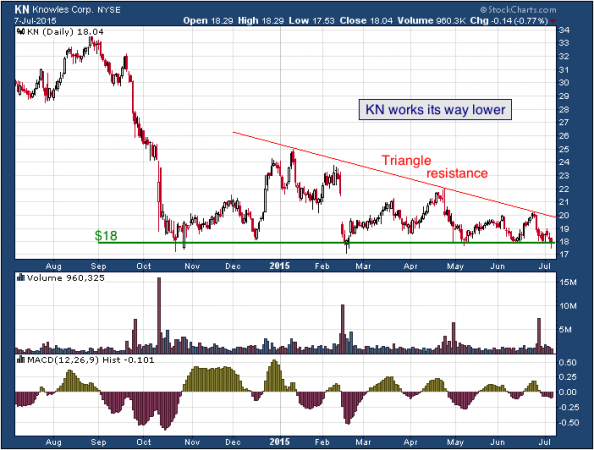 KN has formed a key support level at $18.00 (green) over the past 9 months. Although the stock has dipped below that level a few times, it always rallies back up to hold that mark. In addition, the stock is declining against a short-term, down trending resistance level (red). These two levels combined had KN stuck within a common chart pattern known as a descending triangle. Eventually, the stock will have to break one of those two levels.