THE International Monetary Fund says the boom in metal prices, which has driven a surge in Australian export income, may only be halfway through its growth spurt

In the fund's biannual World Economic Outlook, published today, it shrugs aside recent commodity market jitters to state there are ''few convincing signs'' that key metal supplies are catching up with demand.

After studying swings in global metal prices since 1850, the fund says the commodity boom that began earlier this decade is only about halfway through the average growth period of 20 years.

Demand for base metals such as iron ore and copper had continued to surge ahead of supply for the last decade and extra production was failing to keep up, despite the global mining investment boom. (more)
at 9:51 AM No comments: Links to this post

Business Insider,
It's time to stop whining about sovereign debt levels. So what if your country's debt 100% -150% of GDP?

These statistics sound scary now, but in the future they're likely to be quaint according to Standard & Poor's via Bloomberg.

The ratings firm's latest forecast puts the median global debt to GDP, for 49 major economies, at a mere 245% of GDP by 2050. Just back in 2007 they had expected this figure to be 150%, so it's fair to say they've revised up their estimate a bit.

The firm has described sovereign debt growth as 'explosive'. Or implosive.

“The erosion in sovereign ratings would start in 2015, when hypothetical ratings on a number of highly rated sovereigns come under pressure,” says S&P.
at 9:48 AM No comments: Links to this post

There was only limited strength late yesterday when Alcoa Inc. reported earnings that topped analysts' estimates. Third quarter earnings were 9 cents a share, which compares to the median estimate of 5 cents a share. In addition, they increased their prediction for aluminum consumption to up 13% from their previous expectation of a 12% increase. Alcoa is traditionally the first of the Dow Jones Industrial companies to report earnings and is considered the bellwether for the rest of the earnings season.

Prices quickly fell when the headline nonfarm payroll number showed a larger than expected decline. However, prices were able to recover and trade higher after it was reported that much of the decline was due to widespread government layoffs. 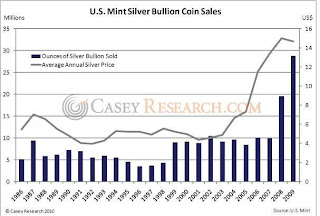 Silver has been sizzling and causing lots of buzz in the industry. Investors are excited. Part of the hubbub is due to its current run. Since its February 8 low, silver has roared ahead 22.4% (through June 21) and has doubled from its November 2008 low.
This excitement has spilled over into greater investment demand – especially so for coins. The U.S. Mint sold more Silver Eagles in the first quarter of this year – just over nine million – than any prior quarter in its history. The Royal Canadian Mint produced 9.7 million silver maple leafs in 2009, also a record.
Take a look at the jump in U.S. Mint coin sales since 2007. (more)
at 9:32 AM No comments: Links to this post 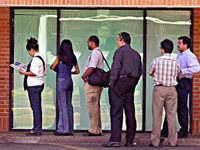 The U.S. economy unexpectedly shed jobs in September for a fourth straight month as government payrolls fell and private hiring was less than expected, hardening expectations of further Federal Reserve action to spur the recovery.

Nonfarm payrolls dropped 95,000, the Labor Department said on Friday. Private employment, a better gauge of labor market health, increased 64,000 after rising 93,000 in August. A total of 77,000 temporary jobs for the decennial census were terminated last month.

Analysts polled by Reuters had expected overall payrolls would be unchanged, with private-sector hiring gaining 75,000.

The government revised data for July and August to show 15,000 more jobs lost that previously reported. It also said its preliminary benchmark revision estimate indicated employment in the 12 months to March had been overstated by 366,000. (more)

Billionaire investor Wilbur Ross said Thursday that reports of improperly handled foreclosure documents and a subsequent halt in evictions by top U.S. mortgage lenders will slow down the lending process.

Ross, who manages $10 billion and is an active investor in the banking sector, said that mortgages likely will be more difficult to obtain as lenders — worried about their ability to act on loan defaults — pull back from writing new mortgages.

"I think it's more of a clogging of the system and introducing another note of uncertainty," Ross said at the Reuters Restructuring Summit in New York.

"I have some real concern that all of these things that are being thrown up against lenders are going to make it harder to get mortgages in the future," he said.

"Why would you make a loan if you weren't even sure that, if the guy defaulted, you could at least foreclose?" (more)
at 9:20 AM No comments: Links to this post 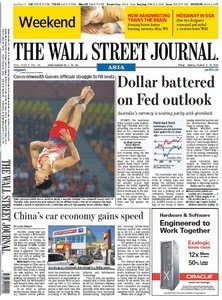 read more here
at 9:16 AM No comments: Links to this post

The dollar will embark on a sharp decline over the next 12 months, Goldman Sachs forecast on Wednesday, as policy makers in Washington look poised to press the trigger on another round of printing money.

Powered by President Obama’s stimulus package and a rebound in inventories, the US recovery peaked in the final three months of last year and has been slowing ever since. (more)
at 8:56 AM No comments: Links to this post

Three Horrifying Facts About the US Debt “Situation” 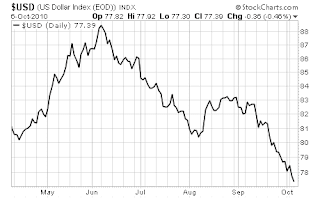 Since too often financial articles consist of some stooge blathering on and on with opinions instead of facts, I thought today we’d simply focus on some FACTS about our current financial system which few if any want to acknowledge.

#1: The US Fed is now the second largest owner of US Treasuries.

That’s right, this week we overtook Japan, leaving China as the only country with greater ownership of US Debt. And we’re printing money to buy it. Setting aside the fact that this is abject lunacy, this policy is trashing our currency which has fallen 13% since June… as in four months ago. Want an explanation for why stocks, commodities, and Gold are exploding higher? Here it is. (more) 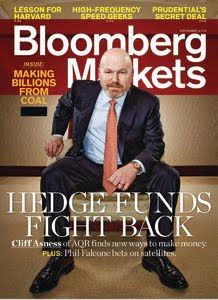 BLOOMBERG Markets is the best kept secret in the financial industry. Learn what many Hedge Fund and Portfolio Managers already know. BLOOMBERG MARKETS is the must have guide to what's happening now, and what will happen in global finance.